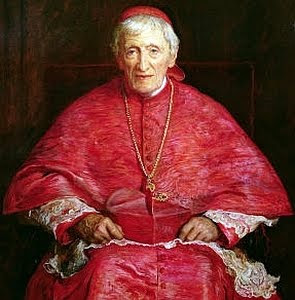 The English attitude to John Henry Cardinal Newman is a little different from that of our American cousins. The American Newman Society is staunchly Orthodox, its English version, does it still exist? was about dissent.
The Newman scholar Dr Ian Kerr in the Catholic Herald rebuts an article by John Cornwell which appeared in the New Statesman at Easter which presented Newman the Father of Liberalism.
Here is an extract on conscience so often misquoted and misunderstood:


Then there's the hoary old chestnut beloved of liberals that Newman "insisted... that a person's individual conscience was more crucial than Church authority" - whereas the reactionary Ratzinger insists that for Newman "Conscience meant an 'informed' conscience... instructed by, and obedient to, papal authority". Well, all Catholics have to believe in the primacy of conscience in the sense that, as St Thomas Aquinas pointed out, our membership of the Church rests on the conscientious conviction that the claims of the Church are true. If we cease to believe they are, then we have a duty in conscience to leave the Church. That is what Newman means when he says that "conscience is the aboriginal Vicar of Christ".


But if we believe in the claims of the Church, then our conscience should tell us to listen to the teachings of the Church - "he who hears you hears me". After all, as Newman points out, our "sense of right and wrong... is so delicate, so fitful, so easily puzzled, obscured, perverted... so biassed by pride and passion" that "the Church, the Pope, the Hierarchy are, in the Divine purpose, the supply of an urgent demand". The liberal assumption that, when Newman famously said that he would toast the pope but he would toast conscience first, he was allowing for so-called "conscientious dissent" from Church teachings, is totally unfounded. All that Newman allows for is the possibility of disobeying a papal order ("a Pope is not infallible... in his commands") - and then only after "serious thought [and] prayer".

Dr Ian Kerr is giving a lecture on Newman at Cardiff University's Catholic Chaplaincy next month... I may attend!

Is this John Cornwell the man who published a book attacking Pius XII?

Which Newman society was this? The one I belonged to, now usurped, I am told, by a creation of the next chaplain's, was sadly full of people wearing tweed knickers, but personal weirdness apart I don't recall any unorthodoxy.

Yet a careful reading of Fr Ker's excellent biography of Newman shows clearly that Newman was regarded as a dangerous liberal by such people as Manning and Ward, and probably by Pius X acting as a private theologian. Newman lived under a cloud of suspicion and it is not surprising that he had to wait until Leo XIII became Pope in order to be offered the Red Hat.

Correction - Pius IX not Pius X - although they would probably as private thologians have agreed.