Beauty of the Liturgy at Ushaw 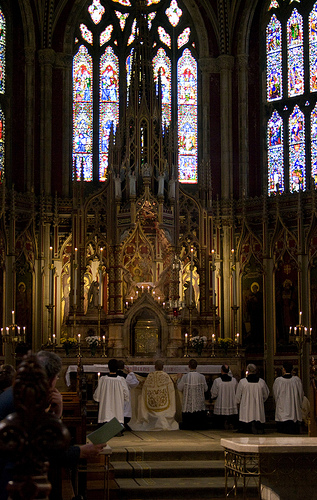 Here are some very beautiful photographs by Joseph Shaw of the recent LMS Conference at Ushaw.
There is a press release below. 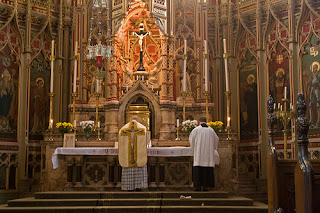 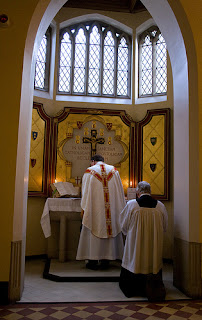 Between Monday 12 and Friday 16 April the Latin Mass Society (LMS) hosted its fifth national residential conference in four years to train priests in the celebration of the Extraordinary Form of the Roman Rite. The conference was held in Ushaw College, Durham, and twenty priests were trained.


This year, for the first time, the conference included separate tuition for laymen to become proficient MCs for the ceremonies of the Extraordinary Form. Ten laymen attended the course.

Among the clergy present were two young priests from the Archdiocese of Colombo, Sri Lanka, who had been sent by Archbishop Malcolm Ranjith, ex-Secretary of the Congregation for Divine Worship in Rome. Archbishop Ranjith is actively reintroducing the Extraordinary Form into his diocese.

Apart from the expert small group tuition given by experienced priests, there were Latin classes and lectures, daily Lauds, Compline, Vespers, Rosary and Benediction. Each morning the college’s numerous side chapels were used by the priests to say their private Masses.

Traditional Rite liturgies were offered each day in the seminary’s magnificent St Cuthbert’s chapel and there were impressive opening and closing High Masses at which the Church’s treasury of plainchant and polyphony was heard.

At the conference dinner on the Thursday evening, a letter of support from Archbishop Ranjith was read out. The archbishop encouraged the LMS in its work of implementing the Motu Proprio and helping priests learn the Extraordinary Form of Mass and he congratulated the Society ‘in this beautiful undertaking in the name of the Church’s Tradition and orthodoxy which is our need and the need of the time’.

The LMS has already announced its next residential training conference to be held at Downside Abbey from Tuesday 10 to Friday 13 August. Full details are available from the LMS.
at April 28, 2010

Father, a quick question but please do not feel you need to put this on your blog. I do not want to cause concern within our Church by asking it. If you decide not to publish I fully understand.
Are the Seminaries in our Land teaching the EO to students? If they are, what year do they start to learn it? If not do you know why they are not being taught? Thank you.

Paul, I don't know if any of our seminaries are teaching the EF. Those at Ushaw were not seminarians.
Maybe someone else can tell us, and whether there is active hostility towards it.

On this post you CAN use the "anonymous", if you are a seminarian or junior priest. I know in the past students who attended EF liturgy have got into all sorts of trouble.

let us hope that this good work and training are followed up with action in the parishes.

I understand that the Extraordinary form of the Mass can now be said by priests without prior permission from the bishop, although, clearly, due protocol must be observed. Given the shortage of priests, none are likely to be de-frocked as a consequence and if banishment to a remote part of the diocese is the sentence then other parishioners will benefit.

Clearly the Extraordinary form should not be brutally imposed on congregations as the Novus Ordo, in its nefarious forms,was, but the important thing is to start the process of restoring the liturgy.

Christ be with them.

I was one of those privileded to attend. I also met one priest and layman from a certain Archdiocese whose Ordinary had FORBIDDEN anyonyone to take part in such conferences! I would have questioned his authority if he had been my Ordinary.
The whole course was friendly and non-threatening for learners.

In response to Paul Mallinder, I do not believe that any seminary under the control of the Bishops Conference of England and Wales teaches its semenarians to celebrate Mass in the usus antiquior. I asked this question at Ushaw and was told that it was not taught, but that it did get a mention in a lecture on comparative liturgy!

You ask why it is not being taught. It is noticeable that in recent decades our bishops have sent men with liberal views, in some cases extreme liberal views, to take charge of our seminaries. Although there are signs that attitudes are changing, progress is very slow.

Matters will probably only change in a major way as personnel change. For example, bishops who have spent years discouraging or preventing priests from offering the Mass in the older form, now find it difficult to do an about turn and start encouraging them.

However, you are correct in identifying the seminaries as the place where change could and should be happening. I think that it is time that the Latin Mass Society and the laity generally started pressing more strongly for this to happen.

Dear Father,
Thanks for the photos pf Ushaw. I hope you don't mind me copying it onto my own blog. I have given you a credit.

Dear Father, As I've said previously I find the whole idea of 'private' masses incomprehensible as they're not part of the Eastern tradition. I can't fathom having a Liturgy where there is no congregation present as it is through the Liturgy that the people are taught.

I've asked 3 different members of our clergy and they have all been quite dismissive regarding 'private' masses saying they don't make sense. The monk I asked referred to them as a "Latin aberration that we have mercifully avoided".

Would you be kind enough to provide some rationale in one of your posts as I am trying to make sense of why it seems so important to you and others who visit your blog. Thanks and I hope I don't appear rude.

Dear Fr Ray. Thank you for the coverage on the wonderful Ushaw Conference. I had the privilege to attend and would earnestly encourage as many people as possible (Lay and Clergy) to attend the next Conference at Downside Abbey, from 10 August 2010 - 13 August 2010. Like pebbles in a pond, the ripples from these Training Conferences are spreading far and wide (South Africa and Sri Lanka were represented at Ushaw). Deo Gratias.

Zeph.
It is toolate, I want to go to bed but..
1. There is no such thing as a "prvate"Mass - at every Mass the whole Church is present.
2. EachMass is of infinite value, therefore even in its paired down form it is right and proper to celebrate it.

There is currently no provision at Ushaw for training in the usus antiquior. A number of seminarians here do have a genuine love of the EF, however as alluded to not so long ago (on a very uncharitable blog associated with a major uk broadsheet), it is more important to keep ones head down and get on with things rather than to make waves (even if maybe we should). The problem with this is that if our reasonable requests for change are constantly denied - radicalisation is a real possibility which is no good for Holy Mother Church.

Please Pray for us seminarians in formation and for those Men whom God has called but have not yet answered that call to Priesthood.

It is the policy at the English College, Rome, not to offer tuition but then none of the staff would be able to do so.