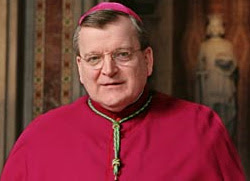 Obedience to the magisterium and the demands of the natural moral law are not only important for salvation, but are especially required of Catholics if a culture of life is to be advanced in today’s world.
Man is tempted to view the magisterium in relation to his individualism and self-pursuit.

Of bishops:  ”When shepherds of the flock are obedient to the magisterium entrusted to their exercise, then surely the numbers of the flock grow in obedience,” he said. “If the shepherd isn’t obedient, the flock easily gives way to confusion and error.” Quoting the Prophet Zechariah, he said the shepherd can be “especially tempted” by the assaults of Satan who, “if he can strike him, the work of scattering the flock is made easy.”
“Where there are problems of chastity, there are problems of obedience.” Rebellion against the moral truth, Archbishop Burke noted, “is a rebellion against God and all that he teaches us.”
The archbishop also stressed that today’s culture “teaches us to believe what is convenient and to reject what is difficult for us or which challenges us,” thus leading to a “cafeteria Catholicism” which “picks and chooses which parts of faith to practice.” He noted how this happened even among some bishops when they dissented from Paul VI’s encyclical “Humanae Vitae.” The consequences of that dissent, he said, has “led many Catholics into habits of sin in what pertains to procreation and the education of human life.”
Archbishop Burke then turned to the exercise of the magisterium in public life. He spoke of the tendency today to compartmentalize the faith, and the “hypocrisy” of some Catholics in politics, medicine, business or other human endeavors, who claim to personally hold to the truth of the faith regarding the inviolability of innocent and defenseless human life, yet cooperate in attacks on the unborn, the infirm, or those with special needs. He also cited “self-proclaimed” Catholics who support state recognition of same sex marriage.
“It is not possible to be a practicing Catholic and conduct oneself publicly in this manner,” he said to loud applause.
To much applause, Archbishop Burke said: “When a person has culpably espoused and cooperated in gravely sinful acts, leading many into error and confusion over fundamental questions regarding respect for life and integrity of marriage and family, his repentance of such actions must also be public.”
He stressed that responsibility is “especially heavy” for political leaders. “To repair the scandal begins with the public acknowledgment of his own error and a public declaration of adherence to the moral law,” he explained. “The soul which recognizes the gravity of what he has done will understand immediately the need to make public reparation.”

But of course this is just Abp Burke's opinion and doesn't apply to England and Wales.
at October 20, 2010

It's almost like he's issuing an auto-da-fe on people like me who disagree with him on abortion and contraception.

Why doesn't he talk more about climate change and the need to campaign for more fair trade?

About time somebody said something sensible.

Thank God for the Archbishop.

I think the Middle Ages are much maligned.

The Church's teaching on the matters discussed by Archbp (soon to be Cardinal) Burke reach back to the Tradition of the Church herself and have roots in the teachings of Christ and in Sacred Scripture. Why don't you educate yourself about the Church's teaching, and really think about your Catholic Faith and the important role of the Magisterium, that is willed by our Lord and saviour, Jesus Christ ? Perhaps you have had difficulties in these matters, and perhaps your loved one's too. Have Faith in Christ and his Shepherds. The Church is a loving mother who must also transmit the Gospel faithfully and with absolute clarity, sometimes - very often today in fact - raising her voice amidst the 'culture of death', of which contraception is a part, because it is anti-love.

(Father I sent an comment in answer to Laurence English about ten minutes ago - forgot my name though - my apologies) Fr. A.M.

Sorry, but I thought Lawrence England was being ironical.

Love the man. What a great Catholic cardinal he is. Could not have picked a better man.

Fr Anon - with respect I don't think you are familiar with Laurence or his blog! I am sure he appreciates your concerned reply but you will find that he was speaking tongue in cheek! He knows far more about the Church's teaching than the average man in the pew and upholds the Magisterium 100%.

Well now Perelin, there are ways of being humorous without saying things that are untrue. This is particularly important when placing statements on a public forum open to all. Fr. AM did the sensible thing given the circumstances. Mr England, to the stocks with you!

I'm glad - for the sake of your soul - that you were not serious Laurence (if I may) and I do like a good joke. But I think the issues raised by the-to-be Cardinal Burke certainly demanded greater seriousness. We do have to be careful what we say on the internet (God help us). No offence taken - I release you from the stocks (thank you for your kind words Ma Tucker). Fr. A.M.

While it is a pity that there isn't an irony button that one can click when necessary, I can't see anything in what Laurence said that was actually an untruth (apart, maybe,from the statement that he doesn't like Abp. Burke). The terms 'Taliban' and 'auto-da-fe' should have been give-aways that his post was a parody.