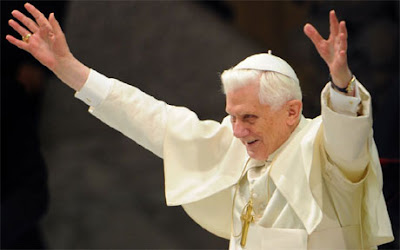 Speaking after lunch with the Fathers of the Middle Eastern Synod the Pope spoke rather movingly of the diversity of rites:


Communion and witness. In this moment I thank the Lord for the communion he has given to us and gives us. We've seen the richness, the diversity of this communion. You are a church of diverse rites, but who still together form, with all the other rit[u]es, one Catholic church. It's beautiful to see this true catholicity, so rich in diversity, so rich in possibilities, in diverse cultures; and yet, still growing from it, the polyphony of one faith, of a true communion of hearts, which only the Lord could give. For this experience let us thank the Lord, and I thank all of you. It seems that maybe the most important gift of this Synod is that we have seen and realized the communion that binds all of us to each other and is witnessed to through that.

It is this "diversity in communion" that seems to be at the heart of Benedict's theology of the Church. The phrase, "polyphony of one faith" sums up his understanding of ecclesiology, it is not the Roman Ultramontanism of previous Popes. He has spoken of the need to be "both and" rather than "either or". Thus in the Latin Church there has been a real attempt to "gather into one" all who subscribe more or less to the Catechism of the Catholic Church. This is after all is the document those who want to join the Ordinariate are expected to sign up to, it seems too to be the basis for negotiations with the SSPX, rather than simple acceptance of the Second Vatican Council.

At the beginning of the Pontificate there was an expectation of bared rottweiler teeth, of big sticks, of a___ kicking but instead we had tea with Kung. There has been no great curial clear out, in fact the most noticeable change was the exchange of P for G Marini.

The heart of Benedict's pontificate is professorial dialogue, at least for those who are willing to accept the Benedictine presumptions: that is that Revelation, Scripture and Tradition, is true and although it develops, it is essentially unchangeable and is to be understood in a hermeneutic of continuity, for example this is how liturgy is to be understood.

The problem is where do those who do not have the taste for this dialogue fit in. What about the campaigners for women's ordination, those with a doctrine free understanding of Catholicism, those who are demanding a radical rethinking of marriage, family and human sexuality? In England and Wales this seems almost to be the default position of at least most lay "establishment Catholics". The basic Benedictine position would be to treat them with courtesy and to trust in the beauty of God's Truth to attract them, there is also the assumption that the Catholic faith is both durable and essentially reasonable, that it will ultimately triumph.

There is also the slight sting in the tail with the Pope's constant demand for an educated laity and that little bit in the Pope's address to our Bishops at the ad limina that they should "recognise dissent for what it is, and not to mistake it for a mature contribution to a balanced and wide-ranging debate." There is the presumption that those involved in "dialogue" are actually committed to the mainstream position.
at October 26, 2010

'The polyphony of one faith': what a wonderful and eloquent analogy!

His words suggest that the Church is like an orchestra playing a symphony, unified by the conductor.
This requires true tolerance between the various sections, none of them trying to exaggerate their own contribution or do down the others, but each committed to the harmony of the whole.

I should like to add to the excellent comment made by RJ that they should also be playing from the same sheet of music!

What does subscribing "more or less" to the Catachism mean? Why not just subscribing? Forgive me if I am puzzled.

Independant,
I think the SSPX might disagree that the CCC is an adequate summation of the faith; a problem with the document not necessarily with the faith. I hope.

A problem with the faith as articulated in the document, more probably!

There is nothing wrong with a diversity of rites so long as they express Catholic belief.
But the easiest way to change belief is to change how it is expressed, the liturgy.

The Neo-Modernist thinkers in the post Vatican 11 period understood this.
Diminish belief in the Real Presense by turning the Mass into a meal, and handling the Consecrated Host like a piece of bread.
Diminish belief in the Ordained Priesthood by having the altar swarm with other "ministers" such as readers, and extraordinary "distributers" of Holy Communion, and so on.
Its all really quite easy, and they largely succeeded.

A symphony indeed, but sometimes some of the players have trouble taking directions from the conductor!

Slightly off topic but still on a musical theme readers may be interested to read James MacMillan's latest post on his Daily Telegraph blog - 'How trendy liturgists tried to stop my Mass being performed for the Pope'.

Father: were you suggesting that they might not have to accept the Second Vatican Council, as interpreted by the magisterium - i.e. free from liberal distortions?

What a pity Pope Benedict was not around in 1870 as he might have averted the considerable secession of respected and learned priests which according to Bishop Butler occurred in Germany after Vatican I. His reasonable and irenical approach was sadly lacking at that time.