Fr Thomas Reese SJ in support of the Pope 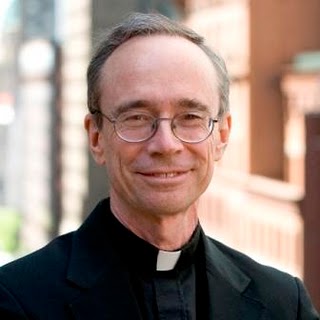 Fr Thomas Reese SJ, the former editor of "America", is often portrayed as less supportive of the Holy Father than most, so read this:


One entertaining example of the uncanny reversals of booby traps was seen in March 2009 on Channel Three of RAI, the Italian state-run television. In her regular Sunday afternoon show "In Half An Hour" (a bit like BBC World's Hardtalk), anchorwoman Lucia Annunziata, formerly President of RAI itself, interviewed US Jesuit Fr Thomas J. Reese. She introduced him as a priest who had resigned as Editor-in-chief of America Magazine when Cardinal Ratzinger was elected pope.
Annunziata, who had recently interviewed rebel theologian Hans Kung, introduced her guest as "hugely important”, “high calibre” and “immensely prestigious". She clearly expected Fr Reese to tip the bucket on the Pope.
But her plan backfired. Not only did Fr Reese not attack the Pope, but he matter-of-factly validated every one of his doctrinal positions. His criticisms were limited to reflecting that the Holy Father should surround himself with people who are more expert with the media.
Flustered, Annunziata broached one issue after another in an increasingly pleading tone: "Surely on this matter you must differ with the Pope?” and “You must be willing to at least admit that not everyone approves of the Pope these days?" Reese smilingly parried every lunge.
Finally she played her trump card: "What about the little girl in Brazil who was raped by her stepfather? Do you support even the decision to excommunicate the family who took her to an abortion clinic?"
But Reese laughed pleasantly and pointed out: "I'm not an enemy of the Pope. I think he's right on all of the issues you mentioned." And then the mortal blow: "I like the Pope!"

This is good news. Thank you.

How sad that it is worth reporting that a Catholic Priest, Jesuit or not, supports the Pope.

Reading the article about the Holy Father, I’m reminded of the words of Oliver Goldsmith about the Village Preacher:

…which is not a bad description of Pope Benedict!

Left footer beat me to it but it is an indication of the sorry state of the church, when "news" like this is considering an occasion for rejoicing. How long with the Holy Father carry on with this "auto demolition" started by Paul VI?

Like Marie Louise O'Donnell on her radio piece about Knock decided she might go back and visit St Dominic's:)

"The First Rule. With all judgment of our own put aside, we ought to keep our minds disposed and ready to be obedient in everything to the true Spouse of Christ our Lord, which is our Holy Mother, the hierarchical Church."