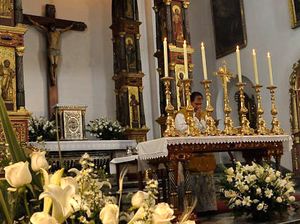 NLM has these two pictures of the "Benedictine altar arrangement" in the Blessed Sacrament Chapel of the Cathedral of Bogotá, the capital of Colombia. 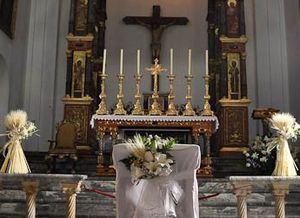 It is the same arrangement we adopt here on Sundays and Solemnities: six candles with a crucifix facing the priest on the edge of a forward facing altar, outside of Mass and during the Liturgy of the Word it works reasonably well, it restores the form of a Catholic altar, it gives focus and perspective to a church.

However for me it is problematic: the doubling of crucifixes, one for the people and one for the priest seems a bit silly; which one is venerated at the beginning of Mass, which is incensed?

It strikes me that the "Benedictine arrangement" is temporary, a transition from the "desk arrangement"of stumpy candles on either end of a table with a crucifix behind on which the priest turns his back, or worst still the "Italian desk arrangement" candles at one end crucifix at the other with a few flowers designed to frame the priest.

The "Benedictine arrangement" is certainly an improvement, it at least makes the altar look like an altar but the next step is to turn the arrangement around to put candlesticks not on the altar but a gradine behind it, to remove the superfluous second crucifix so that priest and people venerate the same image and for the priest to stand on the same side of the altar as the rest of mankind facing the altar together.

It is interesting that in Spirit of Liturgy the Pope writes a great deal about facing East but falls short of saying definitively we should face East but is only the brave or eccentric priest who dares do it.
at December 09, 2010

I agree entirely, but there is no need for a gradine if the candles are tall enough.

"It strikes me that the "Benedictine arrangement" is temporary, a transition"

Of course, Father, that is the idea, cf. http://www.newliturgicalmovement.org/2008/04/logical-end-toward-which-altar.html

I was about to make a comment to that effect on the NLM but thought better of it... It is a bit absurd; why not go the whole hog and dump a reredos on the altar?

I'm sure bishops are mean to priests who attempt to go ad orientem; it certainly doesn't over bother the laity. Fr Edwards of the Southwark archdiocese introduced it 10 years ago and then followed up with a referendum canvassing support in the parish. As I recall he worded it 'Shall I carry on like this (ad ori) so we keep all the beautiful flowers you so kindly donate on the altar and the lovely candlesticks etc? Came back 7 to 1 in favour. In not a terribly conservative parish. One woman of a certain generation left, many more of both sexes stayed.
I would urge priests to steel themselves and just do it, for all masses, especially OFs in the vernacular. Makes a very good point that this posture is not just for the EF or even latin OFs.

I think Giles is spot on. Right minded priests should steel themselves - and face ad orientem.

I have mentioned before the disconcerting habit of one priest trying to make eye contact during the Consecration, unlike another visiting priest who, when I've looked up, says most of the Mass with eyes downcast or closed.

He obviously finds facing the congregation as inappropriate as I find facing the priest at the sacred points of the Mass when we are both addressing God.

This is an important part of the "Reform", so priests who are so-inclined should get on and do it. The GIRM does not forbid and could be said to assume it and Benedict, as is his style, is certainly encouraging it.

The Benedictine arrangement is used for the Masses at the parish I go to when Mass is offered VP. Though now that I think about it, it is kind of silly, why not just face the same crucifix?...it seems like the Benedictine arrangement would apply to the Basilicas in Rome and as mentioned, those places where Ad Orientem isn't possible. Even in the places where the altar is a bit forward, adding a platform wouldn't be such a bad idea to make Ad Orientem possible without doing the disastrous efforts that happened illegally post Vatican II.

Found this post on Fr. Z's site! Thanks for addressing the topic.

This begs a question that I have asked and wondered about many times before: Why oh why does the Holy Father himself take the half-step of the “Benedictine arrangement” when ad orientem is entirely possible? He himself identifies ad orientem as an incredibly important sacred sign…

Perhaps an answer exists that I’m not wise enough to imagine, but it seems to me that this half step arrangement is dangerous because it lends a degree of credence (inadvertently I suppose) to the value progressives place upon worship versus populum.

Yes, it may be “a transitional step” of sorts but is it any more difficult to just do it correctly from the start? I don’t think so.

Even the Benedictine arrangement is wisely introduced in a given parish only when accompanied by much needed liturgical catechesis and explanation, no? So I wonder what that would sound like apart from making the case for a complete return to ad orientem… It would seem to me that one cannot possibly explain the “arrangement” without also pointing to the fact that ad orientem is really what should take place. How confusing this must be to the Catholic who is just starting to learn about this topic!

Long story short, I for one can think of no reason whatsoever beyond the presence of considerable architectural barriers that would make the Benedictine arrangement a good idea. If anyone else can I'd like to consider it.

In all fairness, I think the camera angle is a bit low, particularly in the bottom photo.

I've seen this arrangement at several Masses in my Archdiocese... and I do think it is an improvement.

I must admit that as a convert, the Mass still seemed puzzling to me for a few years.... until I went to one celebrated ad orientum. Suddenly the sacrificial element became quite clear to me.

Face East -it won't kill anyone.

Be brave, be eccentric.

The arrangement is also hazardous. I once saw a candlestick knocked off the altar onto the floor. The candlestick got bent. If it had landed on someone's foot they would have spend Sunday afternoon in A&E.

Well there's one encouraging side to the thing, at least: a readiness of loyal Catholics to state the blindingly obvious, even in respect of Papally instigated practices.

This is what happens when you invent "traditions" - you simply add another layer of problems. Here's a useful working definition of the "hermeneutic of continuity", then: artfully re-engineering orthopraxis so as not to exclude heteropraxis.

Now did anybody mention the good Friday prayer for the Jews...?

Last Sunday I did take the plunge and after devoting the sermon to the previous week about the joys of priest and people facing the same way ( I can`t say `ad orientem` because when I face the people I am facing east in this church) got no reaction at all aprt from two Eucharistic ministers one of whom just said `no` and the other said it was the first time in 40 years of attending Mass in this parish that she has wanted to walk out. It is a hard thing to do and if no-one actually says they saw the point of it then it is hard to sustain it.

Ok, the combox just deleted my last comment... will try again, sorry if its a little terse, I was poetic first time around.

The Pope's current arrangement is a halfway house and as far as my reading of the spirit of the liturgy goes he would much prefer all priests to say mass facing east.

The "benedictine arrangement" must therefore be down to several factors.

1 in St Peters facing east is facing the people.

2 the pope is given very big altars to work with so him and the blessed sacrament isn't obscured by a wall of candlesticks.

3 When the pope visits other countries he has to deal with whatever liturgical setup he is presented with, and being an exceptionally humble man doesn't make a fuss.

I was amazed the first time I attended a novus ordo mass facing east, the entire dynamic was changed. Instead of the priest being an intermediary I felt more able to participate in the direction of prayer (primarily towards God) since the priest was praying in that direction with me.

It was much less patronising, something I'd have never understood till I experienced it myself.

I hope that makes sense, it was better first time around.

Fr Brown,
If two "Eucharistic ministers" object, it must be a good thing.

The arrangement is problematic because it HIDES THE PRIEST? The priest is an instrument, not the focus of the Mass, and they CAN be seen. Good grief, Eastern Rite priests spend part of their liturgies behind an iconostasis, which symbolizes the MYSTERY of the liturgy, and the people don't feel "cut off". The whole purpose of the Benedictine arrangement is to add a vertical and more solemn dimension to the liturgy. Instead of priest and people focusing on each other in a chatty way, the focus is put back onto the altar and what's happening on it. Do blind people not receive Christ in the Eucharist because they can't see the priest? I'd rather look at a priest standing behind the crucifix than have no central crucifix at all. And as for the crucifix "hiding" a central tabernacle? The priest himself often does that!