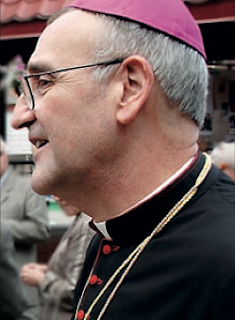 He seems to be younger than our previous Nuncios someone on his way up rather than his way to retirement.
at December 16, 2010

Younger, but he seems to lack that 'knock you down for tuppence' expression that Catholic clergy always seemed to wear when I was young.

It made me feel safe.

Will it not be a culture shock to leave a country where religion has been actively persecuted in living memory for one where it is regarded with indifference?