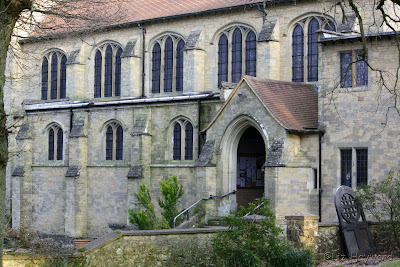 There has been news of the move of the Benedictines of Ramsgate to the Chilworth for ages, whilst negotiations were going on but here is the news in black and white. The move takes place in the spring.
Pray it goes smoothly.
I am so pleased they are coming to our diocese.

After 10 months of careful deliberation, the Benedictine monks of St Augustine’s Abbey in Ramsgate, have voted to purchase the Franciscan Friary at Chilworth, Surrey, as their new home.

On 15 October last year, the Community of eleven monks announced their decision to vacate the monastery on the Kent coast which has been their home for 149 years, and to relocate to smaller premises. Only four months after taking that decision, their brief initial search for a new property came to an end when the Order of Friars Minor made public their own similar decision to leave their Victorian Friary on the outskirts of Guildford, and suggested that the building might be suitable for the Benedictines of Ramsgate.

For almost 120 years Chilworth Friary, a Grade 2 listed building designed by Frederick Walters and constructed in 1892, has served as the Franciscans’ Novitiate house, a place of studies for the training of new entrants to the Order. As a purpose-built religious dwelling with its own church and cloister, it seems an ideal location for a monastic Community.

Fr Michael Copps OFM, Minister Provincial of the Friars Minor, commented: “One of the most difficult things I have had to do as Provincial was to come to the decision that we could no longer sustain our house at Chilworth. Most of the Friars in the Province started their religious life there, and have fond memories of a monastic building that managed to be homely, with a beautiful church set in woods on the top of a hill. I had been thinking with horror that it might become a hotel or health spa, until I was shown the information on the Internet that the Ramsgate Benedictines had decided that they had to leave Ramsgate and look for a smaller monastery.

Reading their ‘wish list’ for the place they were looking for, I saw that Chilworth ticked nearly all the boxes. We see it as providential that it is going to continue as a building housing men dedicated to seeking God’s will in living the monastic life. St Francis found shelter in a Benedictine Monastery at the beginning of his calling. Though the Friars are sad, it is good to be helping the Ramsgate Benedictines continue their life in a new home.”

Dom Paulinus Greenwood OSB, Abbot of Ramsgate, concurred saying: “We have been extremely fortunate in finding a suitable new home within such a relatively short period of time, and will always be grateful to the Franciscans for alerting us to the availability of their Friary. Since making the difficult decision to move from Ramsgate just over a year ago, we have been encouraged and supported by the goodwill, prayers and benefactions of many people, and we do not forget them. We feel that this is God’s will for our Community at this time, and hope to forge ahead in the coming months to re-establish our monastic life and witness in this beautiful, tranquil setting.”

Good news, although they will be missed in Ramsgate.

Great news! We look forward to Benedictine monks once again bringing the Faith from Kent to darkest Surrey and the diocese of A&B.

Great news indeed! I have many happy memories of attending Mass at the Chilworth Friary in the
1960s and '70s, and I was dreading reading that it had been sold for some banal secular use.

As santoeusebio oberves, this represents a wonderful opportunity for history to repeat itself.

"I had been thinking with horror that it might become a hotel or health spa".
The same thought is crossing many people's mind regarding Ushaw College.
A Petition is now on line asking the Archbishop of Liverpool to prevent this from happening.

Yup, the Lord provides solutions and I think a certain Fr. Romuald OFM is looking down from Heaven (DV) well pleased.

I am delighted that Chilworth Friary is to be saved. However, some one should consider starting a blog to commemorate all the wonderful Catholic institutions that have been lost during these years of crisis; before they are either demolished or turned into hotels or leisure complexes. The Benedcitine Monastery at Stanbrook has gone, and Ushaw is to go this year. Upholland has gone as well as Cotton College. Also, the Corpus Christi Basilica in Manchester. It's all very sad, and pictures should be collated on one site to remember the days of faith in the UK!