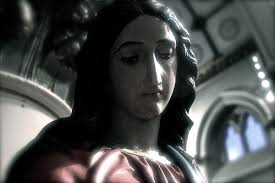 When I first came here to Brighton, a now dead parishioner remembers overhearing one of my predecessors describing the parish to a new curate as "there are courtesans to the north and common prostitutes to the south and east, they come together in the church". Although there were in the past more families there was always a lot of strange goings on here. 19th century descriptions of Brighton might well suggest why the founders of our parish chose her as the patron of this parish, especially as in the old rite she is presented as Penitent rather than witness to the Resurrection. Brighton is still sexualised and still in need of the Magdalen's prayers.

The newly appointed parish priest of Knaphill, has post about some pop singer playing St Mary Magdalen and points out that there is still a popular consciousness of the role of the Magdalen. Fr Henry is in search of a relic of St Gerrard, which made me think that we really need do to develop devotion to our patron, we have a small relic, a not very nice statue but no altar or shrine for her.

I suppose we could offer an occasional votive Mass, I could bring her into sermons a little more often but really I am at a loss, though maybe for the Year of Faith we should integrate our patron saints into our parish lives. The devotion to saints is, or at least was, an important part of "Roman" Christianity as is witnessed by the ancient and august Roman Canon.

Ask the Saint what she would like? I bet she'll let you know!

She was standing under the Cross - I often ask her to accompany me at the mass: Kneel together with me under the Cross, teach me to be sorry for my sins, teach me to love Jesus as she did, and finally, keep my heart in her hands under the Cross in a way it can be washed by Jesus' blood.
I never thought of her as "a witness of the Resurrection"; "penitent" seems more helpful...

Go for it! A shrine to St Mary Magdalen would be wonderful. I think it would help devotion and be a place for those in need of God's mercy and grace.

Could I offer a few ideas? Identify a spot in the Church for an altar, or better still a chapel and set it up there. Monthly devotions on a regular day each month (eg first Wednesday of each month) would be an idea and spread the word, even among the ladies of the night - to come for prayer, time with the Lord - perhaps exposition, confession and devotions, followed by blessing with the relic. Gather some parishioners together (Legion of Mary are very reliable) and get them to help with the work and devotions, perhaps even a little choir).

Some materials on her life would be good - a brief biography - you could write it yourself. Some pictures, prayer cards and medals - there are some good online shops which give good deals and have medals of every saint in the cosmos. Also holy oil is very popular and the Lord works through it. Set up a perpetual lamp in front of the shrine, and then bless the oil with a blessing in honour of St Mary Magdalen, bottle it and for a small stipend to cover costs make it available to people. You may be able to get a first class relic of her from Rome or from her shrine in Provence. And perhaps even organise a pilgrimage to Saint-Maximin and La Sainte Baum.

There is so much that can be done, but ask St Mary what she thinks and then enlist her help. It may well be that she is already speaking to you through your desires. God bless you Father. If I can help, you can contact me through my blog.

Is there a litany of the Magdalene? If so, maybe it would be a good idea to start reciting it regularly, or at least have copies in the vestibule. Litanies are a great source of points for meditation.

Our Shrine Church of SS Peter & Paul & St Philomena has revived devotion to St Philomena. Thanks to Canon Meney, we now have an altar, statue and first class relic. We recite the Litany of St Philomena and the Novena prayer to her after Saturday morning Mass every week. Devotion to her is growing and people travel to visit. Like Father Director says, go for it Father! Ursula


About half a century ago m'uncle was a GP in the Brighton area.
I misremember what (local?) (medical?) archives he dug into for his own general interest, but he regaled the family with mid and late victorian statistics and incidents, the burden of which was that as , very much a new town , the social ills, reaching right up , not just the stereotype of the poor paralled the twentieth century's new towns and new large out of town estates: lack of local social roots and nearbye family: cases by the hundreds and even thousands of mental disorder and/or alcoholism , of course, but also (not then illegal) substance abuse: opiates, you name it, anything gettable over the counter at a chemists, which included quite a lot, with dysfuntional family consequences.
What goes round comes round again?

On my web site, under featured sermons of Father Pfeiffer, there is a sermon on Saint Mary Magdalene.

I believe it is the best I have ever heard on Saint Mary Magdalene.

We will petition her to join your efforts.

Saint Mary Magdalene was the first to be called by name, before the Blessed Sacrament.

There is a nice place in the NW corner

Fr: you do have an alar dedicated to St Mary Magdalen: the high altar. It would be contrary to tradition to have a second. What about a shrine, such as they have at West Grinstead?