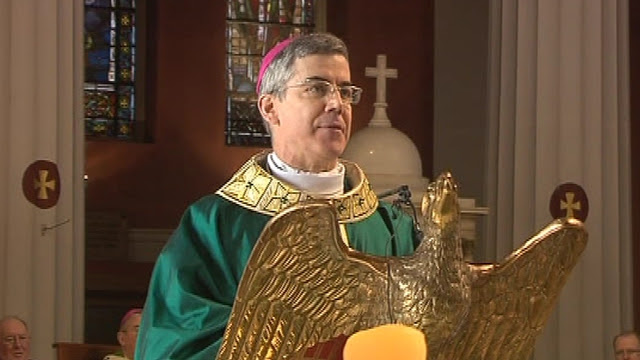 I was chatting to a couple of Irish friends yesterday, both rather spontaneously said in the words of the second, "Charlie Brown: he's doing good!" He meant His Excellency the Apostolic Nuncio to Ireland, Archbishop Charles Brown. The first pointed out that he has been getting in touch with ordinary people, going to Croagh Patrick to preach and offer Mass, going to Youth 2000 meetings, appearing parishes, ordaining priests in bishopless dioceses. He's getting to meet ordinary Catholics, rather than just being in touch with the Diplomatic Corps and the Bishops. It is boosting his personal credibility, it also gives ordinary people the opportunity to discuss the future of the Irish clergy. It is good to hear something positive about a bishop coming from Ireland.

Our own Nuncio too seems to be getting about a bit too, this summer he has been to the Faith Conference, Evangelium Conference, he has been a great champion of the Ordinariate and I understand wanted to come to the Confraternity of Catholic Clergy. It seems that the only place he won't go to is the Soho Masses and maybe Ma won't invite him to deliver the Tablet lecture either (have you seen this new disgraceful blog, Fr Xylophone, really! and Mrs Popehater, well!).
One of the things both seem to be interested in, is hearing about potential Bishops who are outside of the normal circle who are committed to Evangelisation, ours even has  his email address is even available.

A good Nuncio can turn a local Church around. it has happened in the States and Australia, I have a good hope it will happen in Ireland and here - let's pray for them both.
at September 11, 2012

Yes, thank God for our new Papal Nuncio, Archbishop Charles Brown who has done so much already. We need encouragement and holiness in our leadership and he certainly embodies that. I pray for him daily. May the Lord bless and protect him in all he does.

Good to hear encouraging words about the Church in Ireland. And St Mary's Pro-Cathedral, Dublin, where the photo was taken, is where I was ordained nearly 45 years ago. thank you.

Soorry Father...NOTHING is happening in Australia! Our Nuncio who was from Ireland was sent to Israel who were offended. We got and they got Ireland's reject nuncio! No we are not getting any good bishops...not many good priests to choose from. You still get excluded from the seminary for championing the Extraordinary Form.
You see throughout the Irish diaspora there is trouble! I think its linked to wearing anything but black clericals!

Can I second John Fisher on Australia - our last thankfully now departed nuncio was a disaster. Under his watch a new wave of liberal bishops have been appointed (albeit with one or two exceptions) including a bishop that refuses to allow the EF mass in their diocese. Under his watch the child abuse crisis continued to be handled extremely badly, with pressure for a Royal Commission building (and one suspects the reason for his sudden departure given his alleged mishandling of the Irish Inquiry). And while the dismissal of Bishop Morris was the right ne, it was handled extremely badly and has led to a resurgence of loud and angry dissent across the country.

I'm not sure where you got your information about the "turn around" in Australia, Father, but I'm afraid you are significantly off the mark.