"Vatican II: A discussion that can no longer be stopped" 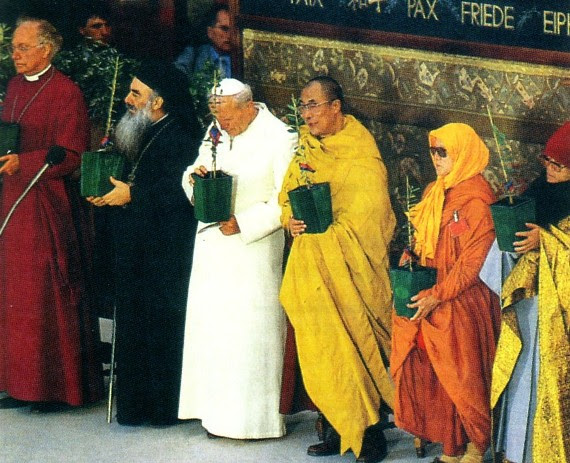 Under the heading, "Vatican II: A discussion that can no longer be stopped". The excellent Rorate Caeli says:


Whatever might be said about the current situation of the talks between the Vatican and the Society of St. Pius X (SSPX), and whatever one's doctrinal position might be, one thing is clear: the frank discussion of the ambiguities of Vatican II and of post-Conciliar Vatican documents vis-a-vis the pre-Conciliar Magisterium has begun, and can no longer be stopped. While it would be easy to exaggerate the quality, extent and openness of the discussion so far, it cannot be denied that signs of it have been appearing in unlikely places, such as the following article that was published last week by the Homiletic and Pastoral Review.

It is interesting that the article deals essentially with mission or evangelisation, read the whole article, but it ends rather damningly:


The church has failed miserably in her missionary mandate, not because of laziness or a lack of numbers. Rather, it is because she has quite simply lost sight of her own mandate. She doesn’t know, for example, whether to convert non-Catholics to the one true faith, or to merely wish them well in the safe haven of their own religious beliefs. Vatican II sanctions both opposing views as equally necessary. It is as if the Catholic Church is just one of many other churches, all of which need to “converge” toward a total Christ who is immanent in all denominations.

More and more, Catholics are shying away from using terms like “proselytizing,” “conversion,” and even “Catholic” in their ecumenical and inter-religious efforts, almost as if they were ashamed of the Gospel, or afraid of appearing as a “sign of contradiction.” In this confused state of diabolical disorientation, the Church has lost her ability to speak to the modern world about God with any clarity or conviction. She has, in fact, lost her salt, and become tasteless.

Indeed, a kind of de-evangelization has set-in. In order to erase the prevalent indifferentism, and growing skepticism, among Catholics, the church needs to re-examine her relationship with the modern world, and clarify her understanding of Christian unity. Otherwise the Church’s missionary activity will be reduced to nothing more than literacy programs, irrigation schemes, agricultural improvements, and health services—that is, the advancement of civilization rather than religion.

Surely a failure to evangelise, to have the confidence in its message, is not merely a problem in itself which we suffer from today but it is a sign of the lack of health of the post Vatican II model of the Church, at least as it is lived out in those parts of the world where it is shrinking. The Church by its very nature is evangelistic if it is failing to produce fruit we must look to the root to find the disease.
I hope that one of the issues addressed by the forthcoming Synod on Evangelisation will be the reasons why we are failing to evangelise. The obvious answer must be the ambiguity, as this article points out, of Concilliar teaching.
Speaking of fruit, I heard of one seminary spiritual director, (guess where?) who was voted out of office by his monastic community who now tells his seminarians he is "as much a Moslem as Christian" and urges them to read the Koran as spiritual reading. That is better than another one, a Franciscan, who describes himself as "more a Buddhist than a Christian. Then of course there are those leading American nuns who have "moved beyond the Church and beyond Jesus".
at September 28, 2012

I well remember the very begining of ecumenism. We were urged by our local priest to go along to an ecumenical meeting in our locality and as I listened to what was said by non-Catholics I just had to disagree with them and I said so. I left the meeting thinking to myself that I had nothing to learn from my non-Catholic bretheren because they were so far from what I knew as the truth. One thing that we were all encouraged to do was to go to the Sunday Service of some other denomination. I did go to my local Anglican service but I made full sure that I went to Mass first. I never went to any more ecumenical meetings since I saw them as being of no use whatsoever.

Then why doesn't the 'more of a Moslem', become one (mind you he'd better be careful which country he is in when he does so or changing his mind might mean losing his head). Why doesn't the 'more of a buddhist', become one? As for the 'beyond the Church and Jesus', that's called athiesm or new ageism - it sounds like some people are very religiously confused or are supporting the 'Judas Syndrome'. As a catechist there was a strong sense of Catholicism as something unnecessary - just part of the religco-spiritual smorgasbord - was undermining and you have to pray and fight against it, sometimes with liitle encouragement.

Father, you are right. Until perhaps five years ago, to even hint at the failings of Vatican II in polite Catholic society, was anathema. But now the genie is out of the bottle.

The Council, although undoubtedly valid, was called, against advice, at the wrong time, for the wrong reasons.
The three Popes mainly involved, John XX111, Paul VI and Jean Paul II were all holy men. But sadly that is not enough. The first was naive, the second easily manipulated and the third, when he woke up and realised the danger, responded in the wrong way.

Fr Werenfried has said “in almost every age men sought to adapt Christianity to our human weakness” - and that is what the liberal/Modernist Reformers tried to do during and after Vatican II.
The result has been described by the present Holy Father as a crisis, but unconstrained by his need to be diplomatic, I and others, would prefer the word catastrophe.

The attack was mainly via the liturgy and it is here, in re-sanctifying the liturgy, that the response must begin. Hopefully the Reform of the Reform movement will achieve this for the Novus Ordo, but this has to be accompanied by a Syllabus of Errors, now increasingly called for, covering the ambiguities and false inferences in the Conciliar documents, and post-Conciliar practise and teachings.

I do not know if anyone is interested in this but, I have just submitted a 14 page document/complaint to my parish council.

It is 14 pages because it includes 22 references to Vatican II where the laity/parish council have not been faithful to the document. It also includes six quotes from other official church documents. (I do want to say that it is not related to the new priest).

Instead of waffling, I will say this. It is going to take brave Catholics who will finally, once and for all, make a stance and will not take no for an answer and challenge overtly liberal parish councils (this must be underpinned with solid prayer because at the end of the day this is spiritual warfare).

It is imperative for brave Catholics to start quoting V2 correctly 'back at them' if anyone is going to get any change.

It would help, would it not, if every celebration of the Mass were to conclude with the recital of the opening verses of the Gospel of St John. Which makes one wonder why it was dropped.

The parish council, in my part of the world at least, exists to
” advise and assist the Parish Priest in the administration of the Parish and the promotion of Parish life”.

Mark you, if you have an overtly liberal priest – well that’s another matter!

Embarrassment about conversion - E.g. The Sisters of Our Lady of Sion was specifically founded by the famous Jewish convert Theodore Ratisbonne to pray and work for the conversion of the Jewish people. Since Vat II, they no longer do so but merely seek to 'improve Catholic-Jewish relations'! Oh dear!