Was Vatican I a Council of rupture?

There is lots of talk about the Spirit of Vatican II,  Fr Henry has "fisked" an interesting interview with the wise Cardinal Piacenza, stating the constant message of this Papacy, "Vatican II was not a Council of rupture".

I have a Greek bishop friend, who teaches theology and is a theological advisor to the Patriarch of Constantinople. I am not sure that much that VII says really interests him, his big problem is Vatican I and what it says about the role of the Pope and the nature of Papal Infallibility. That is the sticking point for any hope of re-union with the East, in the past when I have talked about the possibility of re-union with him, his answer is really "It is impossible", because of Vatican I.

It is interesting that on the Orthodox side there seems to have been developments, though any Orthodox worth his salt would hate that word, so let us speak of a "deepening understanding or of questioning" of the role of "Patriarchates" and their relationships with one another, really because of the preparations for the Pan-Orthodox Synod, which may or may not happen. One of the issues that is on the agenda is the ranking of the Moscow Patriarchate in relation to those of Apostolic origin and especially Moscow's relationship to Constantinople, Constantinople's relationship to Athens is another matter. Although it will never be discussed publicly the Roman Patriarchate is actually important for Orthodoxy, both in how it sees itself but also in the claim that Orthodoxy would make about us falling into heresy or having gone into schism, yet if  "first Rome has fallen", what about Moscow's claim that it is the third Rome because "Constantinople, the second Rome has fallen". What is meant by "falling"? Why is it the there are several claimants to the Patriarchates of Jerusalem and Alexandria, and yet there is only one unchallenged claimant to the Roman Patriarchate? What is the relationship of Constantinople to other autocephalous Churches, especially Patriarchal ones.
Another issue not unrelated, is the validity of the sacraments of what Orthodoxy sees as schismatic and heterodox Churches and ecclesial communities. This relates to how distant, how fallen, are Protestant communities and their sacraments? Are they the same as Oriental Orthodox Churches who rejected Chalcedon, and what about the sacraments of those in communion with Rome, not only Latins but also Orientals and Byzantines.
But the big problem for Orthodox as far as Rome is concerned are the claims, perhaps perceived claims, "the Spirit of" Vatican I, they at least symbolise the rift.

For Catholics there seems to be a blurring of Ordinary and Extraordinary Magisterium. The teaching on artificial birth control and the impossibility of female ordination to the priesthood (and episcopate) are increasingly put forward as "Infallible" teachings, but not so much because they were taught by Pope Paul VI or Pope John Paul II but because they have "always and everywhere" been taught by the whole Church.
For all the exalted language surrounding Vatican I, and certainly the "Spirit of Vatican I" hype afterwards, nothing that has been declared as "Infallible" since 1870 is new, everything is found in the first of the first millennium, that is before the break between East and West.
For the last thousand years, since the great schism a the theology of Patriarchate has been unimportant in the West but the more Ecumenical dialogue developes and the more we come value the the East, the more "a theology of chairs" becomes important.

Vatican I speaks of the Pope having "universal" authority over the whole Church, and indeed the first title ditched by Benedict XVI was "Patriarch of the West", which for Orthodox was seem a slight modification of "Universal Patriarch" but in practice what does it mean? Does it actually mean anything different in the second and third millennium than it would have meant in the first? Does it mean more than occupying the first chair but in fellowship with, rather than dominance of, other Patriarchs.
Was Vatican I a Council of rupture? 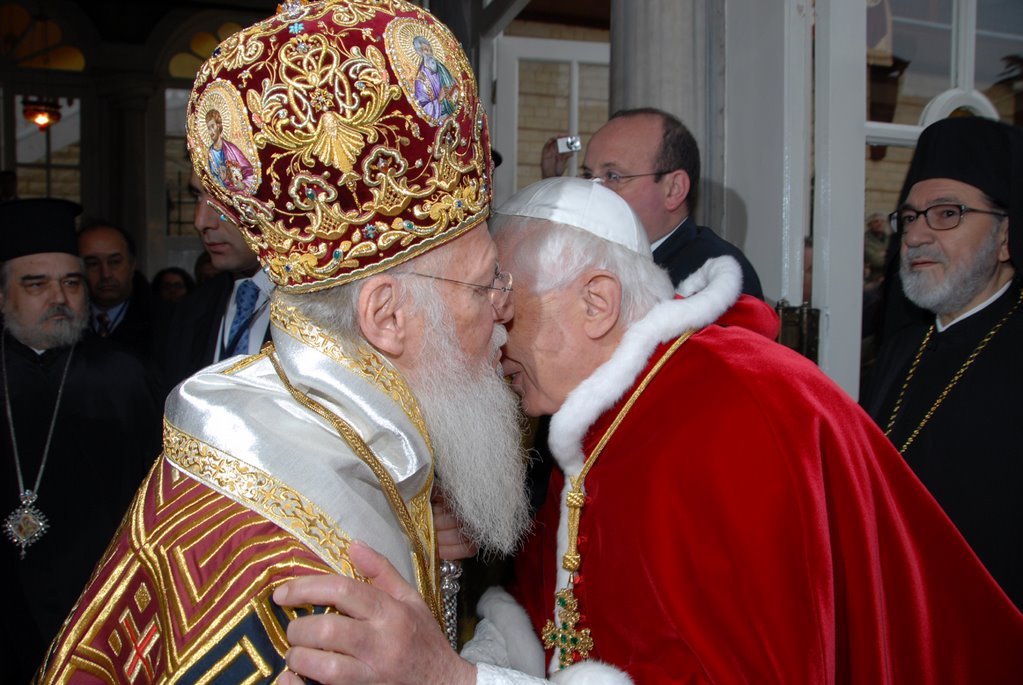 I sincerely hope the Council did not give an opinion of the Bishop of Rome not being the Bishop of Bishops? I have read the documents and do not find any contradiction with infallibity. However, the emphasis of some bishops, including one lately buried, has been on collegiality to an extent of ignoring the Doctrine of Infallibility.

We are so fortunate that this doctrine was clarified when is was over 100 years ago to meet the chaos of this century regarding relativism and the ignorance of most of the laity, who cannot even see the distinctions in Christian churches.

There is only one way for unity and that is for the Orthodox Churches to accept the Pope as the successor of Peter. When this happens, if it happens, we shall have unity.

And, may I add a note of sorrow, as I have friends here and abroad, who have been listening to siren songs on false ecumenism regarding our supposed spiritual unity with the Orthodox. We need more teaching on this from the pulpit before more join in inter-communion and other para-liturgies which mock both Churches.

PS I forgot to add that Vatican I is perhaps along with Nicea, Lateran, Trent, one of the pivotal councils in clarifying what Christ revealed. Scripture and Tradition. I am grateful to the Holy Spirit for preparing us for these times through Vatican I.

When I looked into the whole filoque issue, I noticed that neither infallibility, nor the doctrine of double procession excuses our bad behavior. This is because the council said- and a pope promulgated- that nothing should be added to the creed. We broke the law, and every level of authority subsequently refused to discipline those who broke the law. There is nothing about infallibility or double procession that says the Roman church gets to break all the laws. Vatican I is certainly a hurdle on the road to unity, but our impunity is the mountain.

STM,
But it is how we understand VI. Ultramontanism would indeed understand the Pope as Bishop of Bishops. I think few would have understood that before the Great Schism, they would certainly have understood the Bishop of Rome as first amongst Bishops, but in a role of Servant rather than Master, with a particular role of identifying authentic Christianity.

As for Filioque, one could suggest the was a particular theological problem in the West that needed correcting by the inclusion of this clause, as the was later with the Eucharist that caused particular Western customs and definitions to develop that were unnecessary in the East.

Yes, I know why the filoque was introduced, but much like knowing why a starving man steals bread, the knowing of the intent does not remove the realization that it was a crime.

No responsible Catholic or Orthodox theologian or hierarch today believes the filioque presents an insurmountable hurdle. The most influential Greek theologian alive today, John Zizioulas, has repeatedly said that "understood correctly, we Orthodox can indeed accept the filioque." As for the papacy, forgive my self-promotion, but the best treatment of it is my own recent monograph, *Orthodoxy and the Roman Papacy: Ut Unum Sint and the Prospects of East-West Unity* (University of Notre Dame Press, 2011).

Oh, and for more on the filioque, see http://easternchristianbooks.blogspot.com/2011/06/authorial-interview-e-siecienski-on.html

Promote yourself as much as you like Dr DeVille. I am honoured you should read my little blog

Fr. Blake, can I translate your article into Spanish and post it in my own blog? It will obviously have your name on the top and a link to this blog.
I'm quite concerned about this matter with the Orthodox. So it would be interesting if you continue sharing this things with us, since it's "the other side of the coin".
Jerónimo Vincent, from Valor Crucis (saeculorumvalue.blogspot.com)

Newman wrote to his bishop, Ullathorne, saying that it was a quite unnecessary Council as he took the view that definitions de fide should only be made from "painful necessity" but was relieved when he discovered he could accept its decisions.(Gilley p 366, "Newman and his Age".

Having in Tract 90 reconciled the 39 Articles with catholic doctrine Pastor Aeternus presented little difficulty for Newman. In any case the Council repudiated the private view of Pius IX that he was the sole witness to tradition.

I am in agreement with you Dr. DeVille. From a theological perspective it can be accepted. After all, I have to say it at Mass every Sunday. I am pointing to the disobedience.

Vatican II is an obstacle, too, according to Pope Paul VI's prefect of the Congregation of the Doctrine of Faith, Card. Ottaviani:

VII
The Alienation of the Orthodox

The Apostolic Constitution makes explicit reference to a wealth of piety and teaching in the Novus Ordo borrowed from Eastern Churches. The result - utterly remote from and even opposed to the inspiration of the oriental Liturgies - can only repel the faithful of the Eastern Rites. What, in truth, do these ecumenical options amount to? Basically to the multiplicity of anaphora (but nothing approaching their beauty and complexity), to the presence of deacons, to Communion sub utraque specie.

Against this, the Novus Ordo would appear to have been deliberately shorn of everything which in the Liturgy of Rome came close to those of the East.

Moreover in abandoning its unmistakable and immemorial Roman character, the Novus Ordo lost what was spiritually precious of its own. Its place has been taken by elements which bring it closer only to certain other reformed liturgies (not even those closest to Catholicism) and which debase it at the same time. The East will be ever more alienated, as it already has been by the preceding liturgical reforms.

By the way of compensation the new Liturgy will be the delight of the various groups who, hovering on the verge of apostasy, are wreaking havoc in the Church of God, poisoning her organism and undermining her unity of doctrine, worship, morals and discipline in a spiritual crisis without precedent.