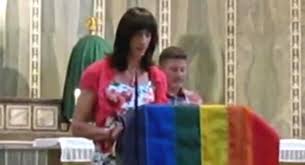 KatholischesMagazin für Kirche und Kultur says that Archbishop Gerhard Ludwig Müller intends to do something about the Soho Masses, quite what, isn't apparent but apparently so many complaints have been made and so little action has been taken that the CDF feels it should act.

Of course the confusion comes from the CDF turning a Nelsonian eye to the whole matter under Cardinal Levada when Bishop Longley, acting on behalf of Cardinal Murphy O'Connor, negotiated the community's move from an Anglican Church. To be fair the impression given at the time was that these Masses would be carefully overseen and regulated, subsequently of course Bishop Longley was moved to Birmingham and following Cardinal Murphy O'Connor's retirement, Archbishop Nichols took over at Westminster and things have been left drift.
These Masses were designed to give pastoral care to particular group who sort help from the Church instead people who attended, vulnerable people, some of my parishioners have been there, they found a lobby group for dissent against the Church's teaching "and rather spiritual than help, a gay dating agency", as one said.

The real problem has been a very serious lack of leadership and pastoral oversight. This, and the grave dissent is presumably what Archbishop Müller will want to deal with.
thanks to EpFl
at October 09, 2012

"...The real problem has been a very serious lack of leadership and pastoral oversight..."

Changing the hearts of the Faithful is a monumental task...

It will take a Cure of Ars to run the devil out of Soho.

Valuable time wasted which could be used for the celebration of EF masses.

Pastoral concern should be first and foremost concern for souls. Scripture (both the Old and the New Testaments) makes it quite clear that those engaging in homosexual acts will never see the face of God. Jesus compared the Kingdom of Heaven to a net which is cast into the sea and catches all sorts of fish. But one the boat gets to the shore, the fishermen sort the fish and throw back into the sea what is no good (Mt 13:47). It is a great illusion to think that it is enough to be a member of the Catholic Church to get to heaven, regardless or whether or not one lives according to the teaching of the Church.

While understanding the concerns, I hope they engage with those who do get pastoral and spiritual support from these Masses.

This was something I had not considered until I spoke to one such Catholic.

There is very little comment made on the priests who celebrate these Masses. Surely they are equally culpable as the Archdiocese.

Tony
From the research I've done over the years and the people I've spoken with, this is what I have found. Those who fully accept Catholic teaching on homosexuality, and strive to live it, wouldn't go within a mile of these Masses. They may have been once but realised immediately what the agenda was and quite rightly stayed away. Then there are those who may be genuinely confused about Church teaching due to poor catechesis or any number of reasons. But leaving such people to the 'care' of those who openly dissent from Catholic teaching is not an act of charity, nor does it comply with the authentic pastoral care for homosexuals, mandated in the excellent 1986 CDF document (which is on the Vatican website). Lastly, there are those who obstinately oppose Catholic teaching on homosexuality, dismissing it as mere 'Vatican teaching' which anyone can safely disagree with. It is difficult to know how one can offer 'pastoral and spiritual support' to those who flagrantly reject Catholic teaching and use these Masses to promote their own dissenting views. There is, however, an authentic Church-approved apostolate for homosexual Catholics, which is called EnCourage. The Masses could be placed under the care of that group, and only priests who fully accept Catholic teaching on homosexuality should be invited to celebrate Mass (this is not always the case at present). Those who are sincerely seeking the truth and desire authentic pastoral care would surely be happy to attend them. As for those with a dissenting agenda . . . we can pray for them and the door is always open, but we shouldn't be giving them a platform to spread their dissent and cause more confusion than there already is on this issue.

Patricia, has any of your research led you to a conversation with anyone who does get pastoral and spiritual support from the Masses?

I've always been grateful when those whose lifestyles put them at odds with Catholic teaching seek to join in the any form of liturgy, it shows there's hope there.

I am not under any illusion that all may be Hunky Dory with the pastoral or spiritual support offered in ANY sphere, but if this is where they have been led, and it's imperfect, as Church we should strive for perfection, not close it down.

Let's put our faith in the Holy Spirit with regard to the issue, the same Holy Spirit that has led the participants of the Mass to the church.

Also, have you ever sought help from EnCourage? I got in touch with them in order to offer support to a family. Having recieved a rather ambiguous reply I asked for clarification within Catholic social teaching, a reply has never been forthcoming.

Hi Tony,
In answer to your first question, yes. They unequivocally rejected Catholic teaching on homosexuality, rejected the teaching found in the Catechism as a 'Vatican invention' and see the Soho Masses as a hopeful sign that the Church is eventually going to change its teaching on this issue. Therefore the Masses give them false hope. They are pleased that people of a like mind - ie those who reject Catholic teaching - are coming together to challenge the Church and to support each other in the working out of that challenge. For people who are at odds with Catholic teaching to 'join in' the liturgy is one thing (as long as they are not receiving Holy Communion while in a state of mortal sin) - but using the liturgy as a platform to promote dissent, is quite another.
It's not a question of these Masses being 'imperfect' - if you read the 1986 CDF document on authentic pastoral care for homosexuals, the Masses contravene virtually every instruction in that document. They were founded by a group who openly reject Catholic teaching on homosexuality. They should be closed down and reopened using priests and laity to run them who fully accept Catholic teaching and who can offer TRUE pastoral care.
I have never sought the help of EnCourage. I cannot explain why you found them so unhelpful. I am aware that others have been helped by them. Perhaps you might try again? Or maybe the family in question should contact them directly - they might be reluctant to speak to a third party, I don't know.

Thanks for your reply Patricia, I can only conclude that we appear to have very different experiences of the people we meet.

All the more reason for the CDF to be thorough in it's quest to maintain help for tose seeking it.

As for EnCourage, we did try a second time. We still found the same result. My help was sought by the family, I made that clear in all correspondence.

'Pat phip', thank you. The oxymornon 'false-hope' from a Catholic perspective puts it in perspective.

Patricia, I am delighted to say EnCourage read these entries and responded to me

I came upon this exchange by chance. I am so glad that, at last, this travesty of 'pastoral' care has been halted. Please God these poor souls will now receive authentic counselling - be given the bread of Truth rather than the stone of lies! What really worries me is the widespread acceptance of strategies so obviously at variance with Church Teaching.