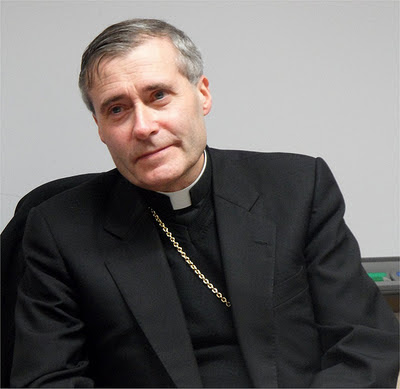 I had lovely evening in London last night at The Keys, the London branch of the Catholic Writers Guild, I missed Mass but I arrived for drinks and dinner. The speaker was Bishop Mark Davies, he spoke about the Second Vatican Council. He began by pointing out he was beginning his First Communion preparation when it began.
What I rather enjoyed and thought was quite insightful was his presentation of it as a spiritual event. Pope John had written to the entire Church asking for prayers for the Council, he himself according to his secretary  seemed deepened his own prayer life. He insisted on the Bishops wearing choir dress, as a sign that the Council was a quasi liturgical event and not simply about debate.
He quoted one or two sources pointing out that what was heard about the Council through out the world was often presented in terms of "factionalism" by journalists left in Rome for the duration of the Council, and most were second rate and scratching around for stories. concentrating on the human rather than Divine elements of the Council.
Interestingly he quoted Bishop Egan, his former Vicar General, who always warned against partisanship or "the football team supporter" interpretation of the Council, of seeing it in terms of Liberal or Reactionary, Traditional or Progressive. In the light of that I asked him how that squared with the Pope's words to our Bishops, "It is important to recognize dissent for what it is, and not to mistake it for a mature contribution to a balanced and wide-ranging debate". He replied that the only criteria to apply to an interpretation of the Council is to ask "is it orthodox, is it Catholic?" "Orthodox" seems to be the becoming word amongst English  bishops.

I think what I find exciting and refreshing about Bishop Davies is not so much whether we might agree theologically, I suspect we might, but that he seems to see every thing in terms of a meeting with God. I think if I were going to speak about the Council I would have taken a very different tack but he has the extraordinary ability to relate everything to the person of Christ. In the questions afterwards he was asked about the confusion the Church has ended up in after the Council, he spoke about Christogical heresy.

He was asked about the Institute of Christ the King taking over New Brighton, he said it was a conjunction of circumstances, I think what he was really saying it was Divine Providence and we should trust God to bring forth fruit.
at October 03, 2012

I have no doubt that the Council was orthodox although I may struggle at times. It is not the Council that has divided the Church it is the `Spirit of Vatican II`

Like Bishop Davies I too find it difficult being 'labelled' as a 'trad' (although I am glad my preference is for the EF). I do regularly attend OF Masses but my great sadness is that I need to know which priest is celebrating. If only all priests "said the black & did the red" we could all be at one with the Mass rather than (as I sometimes do - mea maxima culpa) wondering what the priest is about with his personalising the Mass.
Just today I talked with an old priest friend who summed it up quite nicely. He said "if only the laity would allow us - priests - to celebrate the Mass without them having to be always 'doing' something we would be much better."

Bishop Egan started his first communion preparation when he was three?

No Tony, you have misunderstood. This post is about Bishop Davies, he is a tad older than Bishop Egan, and it is him I am writing about.

No I got the name wrong, if Bishop Davies was born six months after me, he'd have been three when the council started.