C of E; Reformed and Catholic? 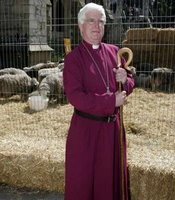 The Church of England’s Bishop Tom Butler, of the Nuffield report, see below, was on BBC's Thought for the Day today. He came out with the idea; I haven’t heard it for years, that the C of E is both Catholic and Reformed. He sited the fact that the C of E has lead the way in having the liturgy in the vernacular – four hundred years the Catholic Church followed, the ordination of married men – four hundred years later the Catholic Church allows married former Anglican clergy to be priests.
He suggested that the ordination of women as priests and bishops and the ordination of active homosexuals was also leading the way, indeed he suggested that there were already homosexual clergy in both the Catholic Church and the Anglican Ecclesial Communion.

The theological naiveté of men like Butler is dreadful indictment of the C of E. I mean not being able to distinguish between theology and discipline. Language and celibacy are not doctrinal issues; indeed the Catholic Church in its Oriental Rites has always allowed married priests and liturgy in the vernacular. Silly, silly man!

Of course there have always been homosexual clergy, the difference is that in the C of E homosexuality clergy are actively encouraged and the teaching, which comes from the Apostles, is actively rejected.
The introduction of women priests and bishops is a novelty, no Apostolic Church has done this before or is doing it now, and indeed the consensus amongst those Churches that are Apostolic is that the Church’s authority is limited, that Church is the servant of the Word of God not its master.

I do think that one of the marks of Apostolicity in the Church is that “from their place in Heaven the Apostle guide us still” (Preface of Apostles). None of those Churches that Dominus Jesus identifies as sister Churches either has women priests or bishops nor actively encourages homosexual clergy, it only happens in Protestant Churches which have broken from Catholic Tradition and Communion.
at November 21, 2006

I'm confused. If celebacy isn't a doctrine, what is it, a rule?

Thank you Father. I heard Dr Butler this morning and couldn't beleive my ears! Thanks for the picture of Tom, I've set it as my screen saver.

Thanks Father. The man is clearly talking the rubbish which comes from uncertainty.

...and they call Catholics arrogant.Astounding stuff.

Thanks for the picture of 'Tom'. I've printed it off as a dartboard.

Not sure about that Father. Sad to say the Anglican communion worldwide is in a mess on this issue, amoungst others. but the C of E specifically does not encourage homosexual clergy, unless you mean the off-message views expressed by some rather than the 'official' C of E teaching. But then sad to say I've heard some pretty wild stuff from Catholic priests which would make Butler look like an orthodox. Regrettably neither house is in perfect order but how the secular world must be amused to see the two churches dismissing each other.

Not sure about that Father."

As a Brighton resident, with a certain past before I returned to the Church, it was not unusual to meet Anglican clergy with boyfriends in the clubs and bars of our city, very occassionally I must admit one would meet a Catholic priest. The difference was the Anglicans were quite open about it and often in the company of other clergymen.

Yes I think I rather overstated my case about the C of E actively encouraging homosexual clergy. Where this has been voiced in connection Bishop Gene Robinson or the appointment of Jeffrey John in the UK this has caused, virtual schism. It is interesting that the Williams first backed, then retract from John's appointment. He is of course now the Dean of Butler's diocese of Southwark.
One could cite many other liberal senior C of E who though scared stiff of fragmentation in Anglicanism are pushing a liberal pro-gay agenda in their own dioceses.

OT but you've been tagged - see my blog

He is just talking from where the sun don't shine

Oh dear, the anglicans really are a mess, they don't know what they believe!

An outside observer can only see a public face, thus it may be to some that a Church that holds both FSSP and the much publicised Haloween Mass on u tube is in a mess. I make no such accusation of my RC co-religionists.
Anglicans are aware of our deep divisions, we live daily, as do other Christians with both faithlesness and contradiction. Those who hold the traditional Anglican Catholic meta-narrative (Forward in Faith, the Society of the Holy Cross etc)would beg that you judge us not my some Bishops in the USA, or indeed by Bishop Butler, but by our daily offering of the Mass, our life of prayer, our obedience to the norms of Catholic moral life and our attempt to guide our people in a Whole and Catholic life; for us the prayers and understanding of Catholics not in communion with Canterbury would be of greater value than sniping from inside 1950's slit trenches. Pax

"Father te Jones", as an Anglican, the Church, of which there is only one, teaches that you are not a validly ordained "priest". The only true ecumenism that can exist between us Catholics and you Anglicans is to show you the full Truth of which you have only a *ray*. Why don't you commit to becoming Catholic?

"An outside observer can only see a public face, thus it may be to some that a Church that holds both FSSP and the much publicised Haloween Mass on u tube is in a mess. I make no such accusation of my RC co-religionists."

Yes, it is a matter of authority, again and again the Church has made itself clear that Halloween Masses are unacceptable, hence the reaction. Within the Catholic Church it is clear what is acceptable and what is not.
Within the C of E there is no such clarity either theologically, morally or even in matters of discipline.
I judged Anglo-Catholicism by its bed-fellows, both literal and metaphorically, and found its place within the C of E untenable, as was my place within it. As did your former Bishop.
I am afraid Father, you are going to find yourself increasingly becoming a High Church congregationalist, I pray and I weep for you, surely you must realise where God is calling you.
Unfortunately it is

I don't know where the last three words came from.

Anonymous, I think you should read the statement of HH on the meeting with Dr Williams. I do not think the intentions of the Holy Father are not served by those who will not even show charity to those who leave comments on this blog.
As far as the invalidity of orders are concerned, remember the former Bishop of London was ordained conditionally because it seemed probable his orders were indeed valid. In the case of Bishop Hine, the former bishop of Fulham, I am not sure. But since the publication of the 1928 Prayer Book Anglicans have sought to validate their orders. Dr Ramsey for example, is rumoured to have been re-ordained by a friendly Orthodox Bishop after his Anglican Episcopal Ordination, therefore he was validly ordained and presumably if the intention was correct on the part of those receiving ordination from him they were validly ordained.

"to guide our people in a Whole and Catholic life;"
Doesn't that mean being in communion with Peter? You really cannot argue that scripture does not clearly teach the pre-eminence of Peter, nor that the Catholic Church has always taught that pre-eminence continues in the Bishop of Rome, to whom the Lord promised power to bind and loose.
Surely to teach otherwise is to endanger souls? There is one Church, that is clearly evident both from scripture and Tradition. It must be plain to anyone, except the most extreme Protestant that the Church of England is plainly not that Church. To fail to want to seek to be part of the Church Christ founded must be a very serious sin indeed.

Martin, your comment got me thinking - I've written something about anglicanism over at my blog. So do Anglicans believe the so called "Archbishop" of Canterbury is the Pope? Or are they sede vacantists?