Sex in paradise: a touchy subject of Muslim debate 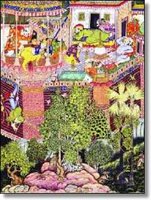 Adult guidance should be sought in reading this posting from Pertinacious Papist, it is a site I have not seen before, worth having a look.
One of the notorious facts about Islam is its sensual portrayal of paradise as a place flowing with wine and honey, springs and fountains, whose pebbles are rubies and emeralds, whose earth is camphor, and where the beds are made of musk. But the eclipsing all these glories are the charms of the houris -- resplendent and ravishing "dark-eyed" virgins, created, not of clay, as are mortal women, but of pure musk, and free from all natural impurities and defects. Their breasts are said to be kawa'eb -- swelling and firm, not sagging; and in order to enjoy them to the full, Allah will give to each Muslim man 72 houris and the manliness of a hundred mortals in this heaven of perpetual youth and, of copulation, "all that they desire." The righteous in paradise will be served also by boys, "pure as pearls," dressed in green garments of fine silk and heavy brocade, adorned with bracelets of silver, and used to drinking wine. And then, there's this:
In 1992, Islamic assassins had gunned down ... Farag Foda, a professor and columnist, a human rights activist, and an outspoken critic of the Islamic militants.... About two weeks before his murder, he mocked what passed for intellectual discourse among Islamicists by citing a recent sermon by Egypt's most popular preacher ... [who] had been telling his audience that Muslims who entered paradise would enjoy eternal erections and the company of young boys draped in earrings and necklaces. Some of the ulema, the religious scholars at al-Azhar University, the government's seat of Islamic learning, had disagreed. Yes, they said, men in paradise would have erections, but merely protracted, not perpetual. Other experts disputed the possibility of pederasty in paradise.
at November 20, 2006

Email ThisBlogThis!Share to TwitterShare to FacebookShare to Pinterest
Labels: Islam

The Christian idea of Paradise is the Beatific Vision. What has Islam to offer? Eternity in a bawdy-house with an all-you-can-eat buffet.

According to Caesar E Farah's book on Islam, it professes that there are two uncreated realities besides Allah: the heavenly prototype of the Qur'an, and the throne on which God sits in the Seventh Heaven. So Islam is effectively tritheistic. Funny, isn't it, that Islam accuses Christians of being so.

I thought they worshipped that meteorite thingy.

That "meteorite thingy" is known as the Ka'aba. Star Trek fans will of course recognise it as a Borg cube!

Is the whole Kaba a meteorite that's been squared-up or something?

Why do they worship that, anyway? What is is meant to do?