At the Travellers Club 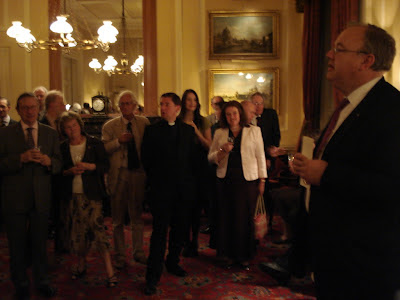 Julian Chadwick gave a speech at the Travellers Club last week to a group of the Latin Mass Society, I was invited, intended to go, then something came up.
Today I think of the theological crisis in the Church in fourth century Alexandria when Arianism threatened the very life of Catholicism. Saint Athanasius was bishop and was repeatedly exiled and at the receiving end of all that the ‘orthodoxy’ of the time could hurl at him. But he was repeatedly brought back to Alexandria at the insistence of the laity because they knew instinctively that all was not well in the Church. They had an impatience with the ‘well-formed’ and ‘enlightened’ Catholic opinion of the time. They knew something was wrong. So they rioted and they evicted the Arian bishops.
John Henry Newman used this period as an example of the laity saving orthodoxy. He was derided for this. Mgr Talbot wrote that the laity should stick to fox hunting!
Newman’s belief in the laity supposedly made him a Father of the Second Vatican Council. I am glad he quotes Newman here, Newman saw in the Anglican Church of his time the serious damaging effects of Liberalism. Newman was a father of of the Vatican Council, in that he urged the return to the ancient Fathers of the Church and to scripture, precisely what Pope Benedict is urging. He also spoke of the "sense of the faithful"; that the within the Catholic Church there is an innate sense of what is true. So when in our own age a section of the laity and clergy held out against bien pensant opinion, there were grounds for saying that Traditionalists are children of the Council – empowered laymen and women! I love the fact that Pope Benedict calls the TLM the Mass of the Council.
This is what the Latin Mass Society represents. I think here he means Una Voce, of which the LMS is part. The LMS is the strongest lay Traditional body in the world. Our Society has held a belief for over forty years that the Classical Roman Rite or Usus Antiquior is a treasure and a store of graces as limitless as the skies; as Fr Faber said: "the most beautiful thing this side of Heaven."
Without over-stressing its defects, we have always believed that the Rite of 1970 has presented the Church with grave problems – a crisis in short.
That belief was at first an instinct. It was followed by anecdotal and practical evidence – plummeting Mass attendance, dearth of vocations, collapse of religious orders etc. I know that the usual line is that this is a sociological trend but the thing is traddies do have full seminaries and monasteries, and abroad does seem to do an a tremendous amount for you people.
Now, increasingly, liturgical scholarship is showing that much of the theology and ecclesiology of the 1970 Mass must be re-thought – from the orientation of the altar to sloppy thinking about ‘Eucharistic Ministers’ to the rewriting of the Propers and so on. We should be proud that much of this scholarship is based in England and your Society has played a large part in encouraging this. I think this is important, so much liturgical writing and stuff pushed out in dioceses lacks serious scholarship, and for the most part was personal opinion or a preference for a particular strata of liturgical archaeology.
Ultimately our worship and our theology are intertwined and we are winning the theological and philosophical arguments.
Posted by Fr Ray Blake

These people are heros. Thanks to them, myself and seven other people have been awakened so far and that's only in the last 8 months. The funny thing is, they are so right. So many people know that things are not as they should be. They can't put their finger on it and they dare not look it in the face. They prefer to trust and hope that things turn around.

A lot could be done to improve matters just by using Health and Safety, and other regulations.

eg Sanctuary steps are a potential hazard and need to be protected by a guard rail.

Altars are quite substantial and need suitable foundations. How many relocated altars have inadequate foundations? Do they need to be checked? Should they be returned to their original positions on the advice of a structural engineer?

There are all sorts of possibilities for creative use of the regulations to promote the reverse-reordering of churches.