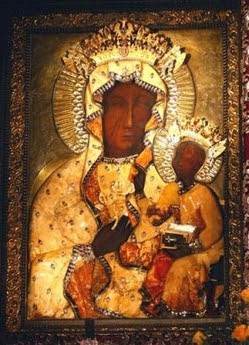 One of the good spin offs from having so many Poles in Brighton is not just that you can find a plumber nowadays but the effect young Polish women have on young English men.
I have just had a nice young guy who wanted to make his "first Holy Communion", it turned out that he hadn't even been baptised as a Catholic. He told me frankly that he wanted to do it because the priest in Poland insisted that he should be confirmed and make his first Holy Communion before he was married and he told me that before he met his girlfriend he hadn't had much to do with God or belief or faith but there were lots of things that he had seen in Poland and heard in Church that had made him think.
I have another man who has, maybe a livelier faith, who discovered it through his Polish girl friend.
Last year I recieved another man into the Church whose life had changed through a young Polish girl and her family, he wanted what she had.
So, this year I am going to have a small group, mainly young men, I think of about six or seven, who want to come into the Church.
Say a prayer for them.
at September 25, 2007

i have some lovely Polish friends..some strong Catholics others almost atheistic..i love them all...i have a lovely icon of Our Lady of Czesto...how do you spell it??

How wonderful. I've noticed that your parish also has a Mass in Polish. Faith is often very strong where authorities try and suppress it, chances are good that the girlfriends aren't very materialistic either. Or relatively so. I feel blessed to have received the faith from my mother through her eastern european parents. They lived the faith every day.

Have you noticed any of the women in your church influenced by Polish boyfriends?

Gem,
Influence of men, only seems to come through friendship with other men.
Poles are well catechised.

I saw your piece on the web site and wondered if there are any Polish men looking or English/Polish women. I have dual nationality...

Good. My friends in Gothenberg pray once a month for the conversion of Scandinavia, with Exposition, and invoking the saints, St Eric and St Birgita. And now there is a lively and growing church, with groups of nuns and monks in several of the pre-Reformation monastic sites.

We have got lots of saints and martyrs to invoke and help us.

And can we set up the Icon of Our Lady of Czestochowa that was donated to the Parish?