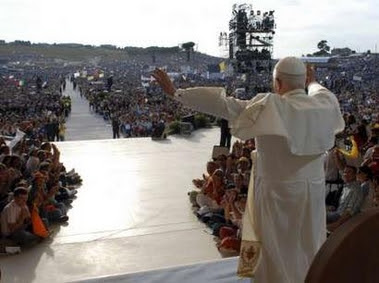 LORETO, ITALY -- Pope Benedict lamented the loss of the traditional family in remarks yesterday to hundreds of thousands of young Catholics who travelled to this shrine town for a two-day meeting with the pontiff.
In trains, buses and on foot, groups of pilgrims from across Italy, as well as some from Poland, Germany and elsewhere made their way to a dusty field down the hill from Italy's most important shrine to the Virgin Mary.
Benedict answered their questions about faith and, after hearing about the lives of young people living in broken homes and on the margins of society, told the crowd that the church and the family unit should be the nuclei of society.
"The family, which should be the meeting place between generations, from grandparents to grandchildren . . . is breaking up in pieces," the Pope said.
Late yesterday, Benedict was heading to the shrine itself for a moment of prayer. The shrine, known as the Holy House, is a simple stone cottage that Catholic tradition says was the home in Nazareth where the Virgin Mary grew up and was told she would bear Jesus. 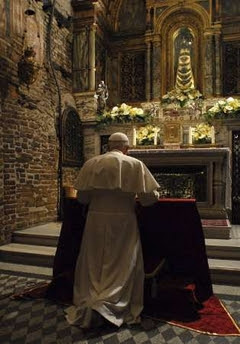 Loreto is the city of the "Holy House of Nazareth", which seems to have been brought stone by stone from the Holy Land, just before the Christian Kingdom of Palestine was destroyed by Muslim invasion. The later legend says it was brought by angels.
at September 02, 2007

He certainly is in touch with modern day life & the young people..

I saw a great deal of his visit live on EWTN. It was so obvious how he was deeply in love with the people and how much they loved him too!