The death of Pius XI 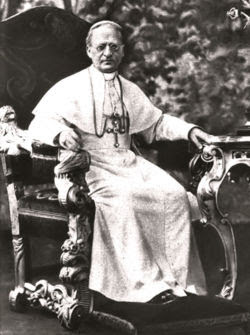 I found the lead to this article in a back issue of Time Magazine on the Cafeteria is Closed.
I have always a an admiration for Pius XI
The long corridors of the Vatican began to sound with the rustling of soutanes and priestly habits. The Holy Father was comatose, his pulse weakly fluttering. Dr. Filippo Rocchi became suddenly alarmed, aroused the Pope's Secret Chamberlains in a nearby room. Present in the modest chamber, in which the Pope could gaze upon a portrait of the longtime protectress of his health, St. Therese of Lisieux, gathered a hushed assemblage: lean, austere Eugenio Cardinal Pacelli, Papal Secretary of State, Camillo Cardinal Caccia-Dominioni, the Pope's protege and master of ceremonies, Count Franco Ratti, the Pope's nephew, Governor Camillo Serafini of Vatican City. The Pope's regular doctor, Dr. Aminta Milani, himself down with a high fever, left his sickbed to administer to the Pontiff a last, desperate injection of adrenalin.
The injection rallied Pius XI for the saS and solemn ministrations reserved, by centuries of tradition, for the last moments of a Pope. To Lorenzo Cardinal Lauri, Grand Penitentiary of the Holy Roman Church, Pius XI, propped up by pillows, whispered his confession, received absolution for his sins. Then attendants washed the Pope's face, hands and feet for their anointing in the last rite: extreme unction. The Monsignor Sacristan, Alfonso de Romanis, parish priest of the Vatican, sprinkled the still room and its grave company with holy water. "Thou shalt sprinkle me with hyssop, 0 Lord, and I shall be cleansed. . . "
With holy oil Monsignor de Romanis touched the Pope's closed eyes. "By this holy unction and His most loving mercy may the Lord pardon thee whatever thou hast sinned by sight." The dying man's ears, nose, mouth, hands, feet by holy unction were shrived. With the others' low voices joining in the responses, Monsignor de Romanis prayed: "Make safe Thy servant, my God, who trusts in Thee. Send him, 0 Lord, help from Thy holy place, and defend him out of Zion. . . ."
The dying man's breathing grew shallower. In deep emotion Cardinal Pacelli cried: "Holy Father, give us your blessing!"
at September 04, 2007

Recently, I read somwhere (I can't remember where) of a biography of Pius XI.

I've tried googling for it, etc., but can't find it.

Does anyone know, please ?

according to amazon it's by
W. Townsend [1930]; but unavailable.

Many thanks for the suggestion.

I dare say they are all out of print, but chasing old book titles is a hobby of mine.

Pope Pius XI has to be one of my favourite popes of all time. I think he makes it to the much coveted Dolphinarium bronze medal position just behind Pope John Paul the Great and St Peter.
He established the feast of Christ the King, was a pioneering anti-racist and Mussolini hated him. I believe that when he died, even Communist newspapers hailed him as a champion of freedom.
What's not to like, in other words.