Pope: Young people; do not be afraid to follow the “alternative” route of true love 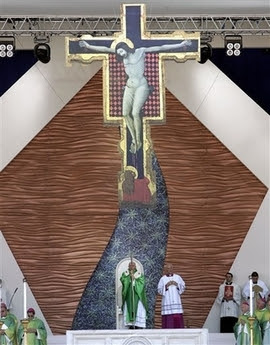 Benedict XVI proposes a way of life that “goes against the trend” to over 500 thousand young people: not the success, power, arrogance or empty models promoted by the media , but the courageous model of Mary, solidarity and protection of creation. Loreto, the home of contemplation to become “witnesses” on the streets of the world.

In an exigent and a clear proposal Benedict XVI today invited the young people gathered on the Montorso plain between Loreto and the Adriatic sea, to a lifestyle that “goes against the trend”, to transform society by following the “humble” example of Mary. In his homily during mass concluding the Youth Agorà, he said: “Do not follow the path of pride, rather, follow the path of humility” Go against the trend: do not listen to that chorus of bias and persuasive voices which today put forward a model of life that is drenched in arrogance and violence, in dominance and success at all costs, where appearance and possession to the detriment of others is openly promoted. All of these messages carried by the mass media are aimed at you! Be vigilant! Be critical! Do not follow the trend produced by this powerfully persuasive media. Do not be afraid, my dear friends, to prefer the ‘alternative’ route indicated by true love: a sober style of life, a life of solidarity; an honest commitment to your studies and work; a cultivated interest in the common good. Do not be afraid to appear different, or the criticism that you are out of fashion or a loser; people your age, even adults, all of those who seem far from the mentality of the Gospel values, have a deep seated need to see someone who dares to live according to the fullness of humanity manifested by Jesus Christ”.
The pope’s words met with the warm applause of the immense crowd gathered on the plain. Yesterday alone, over 300 thousand people for the vigil; this morning, the arrival of thousands more young people pushing the numbers up to touch half a million. Many of them spent the night in the open, in prayer and meditation or in dialogue, helped by the “fountains of light”, illuminated meeting points placed at intervals throughout the plain, where priests and catechists were present to listen, hear confessions, speak about vocations, until first light appeared and the Morning Prayer said. 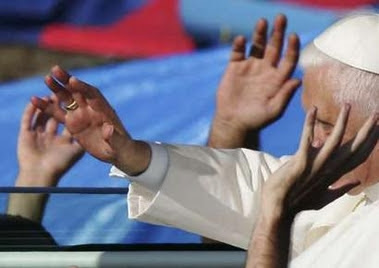 The courage of humility
What Benedict XVI proposed is a veritable way of life for anyone who wishes to remain “young”. Yesterday evening during the vigil the testimonies of some young people laid bare the difficulties and insecurities, the marginalization and unemployment linked to the world of the young. Today the pope affirmed that “Jesus has a special preference for the young” and that God himself “seeks young hearts …. To become the protagonists of the New Alliance”.
The pope’s programme for young people is taken from Mary’s “youth” and has at its foundation her humility. Recalling the nearby sanctuary of Loreto, where stones from the Holy House of Nazareth are preserved he affirmed: “the Holy House of Nazareth is the sanctuary of humility: the humility of God who became flesh and of Mary who welcomed him to her womb”.
The pope is not afraid of showing the stark opposition between the ideals of the world and Christianity: “The humble – he says – are perceived as being defeated and beaten, people who have nothing to offer the world. Yet this is the master route, not only because humility is a great virtue, but because above all it represents the very way in which God himself behaves. It is the path chosen by Christ”. And after having underlined the necessity of a witness that “goes against the trend”, he adds: “My dear friends, the path of humility is not the path of renunciation, it is the path of true courage. It is not the result of a defeat but of victory of love over selfishness and of grace over sin. In following Christ and imitating Mary, we must have the courage of humility”.
The “new paths” which the young people need to follow imply the ability to say “yes to God”, from who “all the yes of our lives” descend. There is also something new in our view of the faith and of the Church: “Our faith does is not merely a list of moral prerogatives, rather, it is a glorious journey towards the light of our Yes to God. It is true; there are many great challenges ahead of you. The first of which remains the challenge of following Christ to the very depths, without reservations, without compromise. Following Christ means being a living part of his body, which is the Church. You cannot call yourself a disciple of Jesus if you do not love and follow his Church”.
The Church (which is not a “power centre”, he had said last night) is a place which unites, not for “success”, but for “the good of humanity, a good which is both authentic and shared, and which does not subsist in power or possession, but in being”. These radical decisions are necessary in order to build “the city of God with man, a city which grows contemporarily from the ground up and from Heaven downwards, because it develops in the encounter and collaboration between man and God”. ( Ap 21,2-3)”. 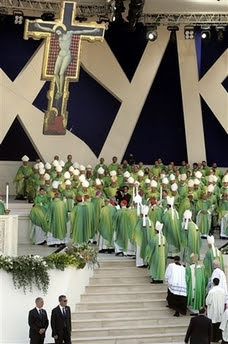 Stewards of creation
In building “a more just and sharing society, where everyone can enjoy the fruits of the earth”, the pontiff indicates one priority: that of “safeguarding creation”. “The future of the planet – said the pope – “is in the hands of the new generations, a planet where the signs of a development that has not always protected the delicate equilibrium of nature, can be seen. Before it is too late, we must take courageous steps, to recreate the alliance between man and earth. We need to say yes to safeguarding creation, we must decidedly commit ourselves to invert those tendencies which risk bringing about irreversible degradation”. In fact today the Italian Church celebrates the National Day for the protection of creation, dedicated to water, “a precious good, which if not peacefully and equally shared, is destined to become a motive for tension and bitter conflict”.
And after having invited the young people once again – just as last night – to participate in the World Youth Day Sydney 2008, the pope turned to the Blessed Virgin: “In the end …..We turn our eyes towards Mary, model of humility and of courage. Help us, Virgin of Nazareth, to be docile to the work of the Holy Spirit, as you were; help us to become ever more saintly, disciples in love with your Son Jesus Christ; sustain and accompany these young people so that they may be joyful and tireless missionaries of the Gospel among their contemporaries, in every corner of Italy. Amen!”
At the end of his homily, the applause, waving of banners, scarves and the shouting of slogans lasted so long that the pope was forced to ask for silence in order to continue the mass. The silence of the Home and the witness of the town square
In the Angelus, the pontiff returned once again to underlining the bond between Loreto and Nazareth, the place of the annunciation to Mary: “Loreto second only to Nazareth, is the ideal place to pray and meditate on the mystery of the incarnation of the Son of God….the place where the Virgin said ‘yes’ to God and conceived in her womb the eternal incarnate Word”.
The pope recalled that every “agorà”, every public moment, needs a “home”, a place of contemplation: “The town square is big, it is open, it is the meeting place for many for dialogue and confrontation; the home, instead, is the place of inner gathering and silence, where the Word can be heard in its depths. In order to bring God to the town square, first you must gather him to your inner being at home, just like Mary in the Annunciation”. And he adds that likewise” the home must open out onto the square: this is further suggested by the Holy House in Loreto, which has three walls not four: it is an open Home, open on the world, open to life and even to the Agorà of young Italians”.
The last proposal made by the pope is that Loreto become a constant reference point in the lives of the young: “In the most important moment of your lives come here, at least in your hearts, to gather yourselves spiritually between the walls of the Holy House…. Then will you become its true witnesses in the ‘squares’, in society, bringers of a Gospel that is not abstract, but incarnated in your own lives”.
Confirming this commitment to witnessing God in society, at the end of the mass 72 young people from diocese across Italy received the missionary Mandate of the Italian Agorà, to bring the faith “with joy and gratitude” throughout the world. The pope bestowed on them the so-called “pilgrims sackcloth”, distributed by two bishops.
at September 02, 2007

What a beautiful homily it was! I can't wait for the english translation to come out so I can read it again!

Thanks for all that inormation..

I find it quite extraordinary, but very encouraging that so many young people followed the Pope to Loreto.

For his part, Pope Benedict responded magnificently to their enthusiasm, while never straying from his message :
"Do not follow the path of pride."
(which is all this world has to offer : we all know what is meant by worldly success.)

It must be extremely difficult for the young who are the targets of media persuasion and peer pressure to respond to his call.

But the Pope's words are persuasive too :
It moved me, a cynical middle-aged man, to hear him speak of "the victory of love over selfishness and of grace over sin."

And yet the Pope sticks to his central theme :
"You cannot call yourself a disciple of Jesus Christ if you do not love and follow his church."

Timely words indeed !
I hope the young people at Loreto listened to them.

I hope everyone everywhere listens to them.

i'm an italian girl and i was in Montorso for the Agorà of italian young people.I lived two unforgettable days and i still remembre the emotions in seing the Pope and in listening at his words. i spent the night between satudrday and sunday waiting for the confessions so we prayed and sang in little goups to get prepared for the sacrament.
It has been a wonderful experience and I met lots of people from all over the world, not only from italy. wath the Pope says to us is difficult to do in uor everyday life but we will try to do our best with the help of our families of our educators, parishes and youth groups. it is fantastic to see that I'm not alone and that there are lots of people also af my age that believes in God. I hope to be to sydney, in july for the world youth day with tousands af people froma all aver the world. we have the mission to be His witnesses!!!!