Hitchens will die a Catholic or a Madman 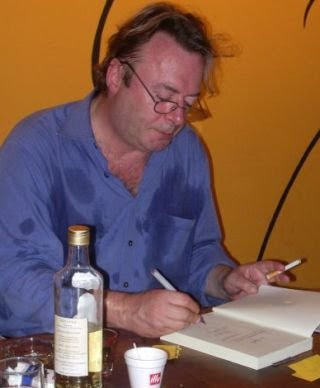 FATHER RUTLER: I have met saints. You cannot explain the existence of saints without God. I was nine years chaplain with Mother Teresa [inaudible]. You have called her a whore, a demagogue. She’s in heaven that you don’t believe in, but she’s praying for you. If you do not believe in heaven, that’s why you drink.
CHRISTOPHER HITCHENS: Excuse me?
FATHER RUTLER: That’s why you drink. God has offered us happiness, all of us. And you will either die a Catholic or a madman, and I’ll tell you the difference.

Curt Jetor quotes an eyewitness:
“At the end of the event as he staggered, sweating and red faced, out of the room, he [Hitchens] advanced on Father Rutler in a threatening and physical manner, screaming that this beloved pastor and brilliant scholar whom he had never met was `a child molester and a lazy layabout who never did a day’s work in his life’. His behavior was so frightening that a bodyguard put himself between Hitchens and Father Rutler to protect him. Several of the event organizers then escorted Hitchens to the men’s room and when he emerged he continued his psychotic rant, repeating the same calumnious and baseless screed as before. It was then that Father Rutler, in the most charitable manner, told Hitchens [for the second time] that he will `either die a madman or a Roman Catholic’. … Unless he faces his alcoholism soon, I am betting on the ‘madman’ ending for him.”
at September 27, 2007

Father Rutler was right. I'm hopeful that Mr Hitchens will see the light and not sink into despair. He is a terrible beauty. If he turns to the light he could be magnificent. He is obviously struggling. Prayers for him are needed.

Poor man looks a wreck. Booze, fags and coffee all at once?

What's the line at Ladbrooke's or Vegas?

He might be a much tougher nut to crack than Lord Marchmain.