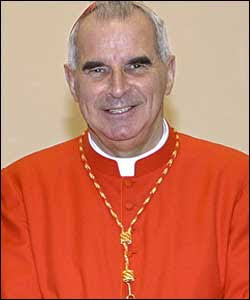 (Zenit.org)
A Scottish cardinal is urging British politicians to an examination of conscience over recent votes in the Parliament that constitute "attacks on human life."

Speaking at a Mass in the Crypt of the House of Commons, Cardinal Keith O'Brien reminded members of Parliament and the House of Lords that society is currently living a "time of confusion over the most basic questions about our society and the values we hold dear."

The archbishop of St. Andrews and Edinburgh added that country needs its legislators to follow their conscience, even at the expense of political difficulty.

Parliament voted May 19 in favor of the "Human Fertilization and Embryology Bill," which allows for the creation of human-animal hybrids, made by introducing human DNA into animal ova.

They also approved the creation of "savior siblings," are created using in vitro fertilization techniques with the goal of making a genetic match to help an ill older brother or sister. Embryos whose genes do not match will be discarded.

On May 20 the Parliament legislated that fathers are not a necessary prerequisite for seeking in vitro fertilization, and that the upper limit on the abortion law should stay at 24 weeks of gestation.

"It has struck me that for all the Church's calls for recognition of the inviolability of conscience," Cardinal O'Brien said, "the sad reality is that the vast majority of politicians have given support to various attacks on human life with apparent lack of reproach from conscience."

He asked, "What does one say then, in the face of those who without guilt condemn the innocent in the womb, show disregard for family life and play God with the building blocks of life?"

The cardinal continued: "We know that many people of faiths other than our own, including Muslim, Jew, Hindu, Buddhist and Sikh, who believe in the sanctity of unborn human life, join with us at this present time and are continuing to seek through their ongoing efforts a change in the present laws.

"Yet our culture does much to dull that inner voice of conscience. A feature of our age is the incessant noise, the lack of quiet, endless distraction; the ipod and mobile phone ensure silence and reflection are the preserve of very few."

"We cannot but help notice that consciences among even some who ostensibly see themselves as loyal Catholics or champions of the life have been dulled even so far as to acquiesce with what is euphemistically called a right to choose," the cardinal added.

"God's gift was not a spirit of timidity, but the Spirit of power, and love, and self-control. So you are never to be ashamed of witnessing to the Lord," Cardinal O'Brien said, quoting St. Paul.

He added, "That is precisely what all involved in political life are called upon to do at this present time."
at June 07, 2008

"Speaking at a Mass in the Crypt of the House of Commons, Cardinal Keith O'Brien reminded members of Parliament and the House of Lords..."

Thank God we have a *few* spiritual leaders, like Cardinal O'Brien!

Were there any members present who voted in favour of the bill, and were then refused communion at this Mass, I wonder?

How many priests took the opportunity over the last few weeks to explain the Church's teaching re the sanctity of all human life.

I'm willing to bet that if there were some at that Mass who had voted for that particular Bill, they were not refused Holy Communion!

So important now that we keep the pressure on MPs. Committee stage will end on 12 June.