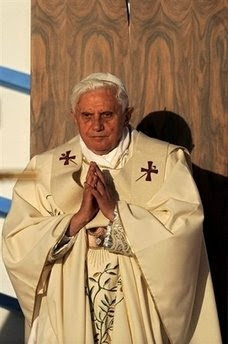 Might add to this and proof read later, when I have time
For the most part most people I know think Pope Benedict XVI, now gloriously reigning, is the best thing since sliced bread, though I must admit, here and now, I never let sliced bread in the house.
Of all theologians of the 20th century Joseph Ratzinger was the one I clicked with, though at the seminary I used to keep his books hidden behind others on my bookshelf after I was criticised at one orders meeting for reading him. The priest who thought it a issue is now the Bishop of ..... Thirty years ago he said "Ratzinger is the reactiionary rump of an age we have out grown". When I think of that, I can't help a small ironic "tee hee", coming out of the side of my mouth.
I gave a paper on Spe Salvi recently, I think some of the clergy present had real difficulty with certain aspects of the Encyclical, most especially its teaching on the last judgement, it challenges the prevalent universalist idea of salvation.
I am sure that many other aspects of his theology cause people problems, his teaching on the centrality of the Church, on Ecumenism and Protestant ecclesial communities, the uniqueness of Jesus Christ and Sacred History, are some of those things which come to mind.
It is perhaps the liturgy that is the obvious point of really strong disagreement but it is, I suspect, the touchstone of deeper discomfort. It is the Benedictine trend that is for many older priests the source of discomfort.
One priest I know can't mention the Pope's name without preceding by a few swear words, a bit of Pope rage, this is the same priest who, I have written about before, who often speaks tenderly of the old liturgy but, now would never dream of celebrating it. Benedict, for him, seems to be expecting him to repudiate everything that he has taken on in the forty plus years and to re-examine a lot of what he has cast off. It is the liturgy where it hits him most.

I talk about Benedictine pluralism, speak about him as the "pro-choice Pope", but for someone who has placed his trust in a different type of papacy which has existed since at least 1870, a monarchical one, this Pope creates problems. He has gone along with the removal of Papal pomp and yet restores traditions and traditional forms

“The pope is not an absolute monarch whose thoughts and desires are law. He must not proclaim his own ideas, but rather constantly bind himself and the Church to obedience to God’s Word.” part of the his inaugural homily

The great transition that Benedict is making, not just with papacy but also with episcopate is the removal of monarchy, and whim! from both institutions. The role of both bishop and pope is in the words of VII, to be the faithful bearer of the Tradition. In the liturgy especially pope and bishops are seen traditionally as safeguarders not innovators, an idea that is very much to the fore in traditional liturgy.
Benedict would agree with those who call for a greater decentralisation of the Church, an increase in episcopal authority but that can only be if bishops really do bear the Tradition, and are united with one another and the past in the Tradition. The big problem is popes, bishops and priests have been dismantling Tradition over the last few decades. Summorum Pontificum is above all about unity with the past, with Tradition. It is also about unity with the East that has a quite different unerstanding of both authority and Tradition.

“My real program of governance is not to do my own will, not to pursue my own
ideas, but to listen, together with the whole Church, to the word and the will
of the Lord, to be guided by him, so that he himself will lead the Church at
this hour of our history.”

After B16 election at Mass the priest compared his election to like being in a car wreck during the homily. He says it is something you just have to live. He went down the list of causes such a remarriage without an annulment, homosexuality, etc. I think he really thought that a new Pope would usher in a new age, specifically a progressive age.

Thankfully this priest is now retired and is not helping out at that parish.

"The great transition that Benedict is making, not just with papacy but also with episcopate is the removal of monarchy, and whim! from both institutions. The role of both bishop and pope is in the words of VII, to be the faithful bearer of the Tradition. In the liturgy especially are seen as safeguarders not innovators, an idea that is very much to the fore in traditional liturgy."

Three of the best, most instructive, and wisest sentences any of us will read this year.

Pope Benedict is the best. I can`t believe we have him as our Pope today. He is the Hope Pope. Whenever I think things can`t get much worse, I look at him (yes I carry a photo of him in my purse) and remember who is in control. I do think we all ought to pray for his protection and his intentions more often.

A car crash did happen over the course of the late 60s/early70s when I was given was what passed then for catechesis, but thankfully PBXVI has put the car in the garage and is giving it a thorough repair job.

Thankfully the drivers of the car are having their licences revoked.

Why is it that liberals, both religious and political, espouse free thinking for all except for those who passionately disagree with them. During my liberal phase I began to realize that there is nothing so illiberal than a liberal. However, having stated that, there are many conservatives who try to live in a world lacking compassion, especially when it comes to the social doctrine of the Faith. However, the humble conservative I believe is easier to influence when thirst for the truth is anchored in the Authentic Tradition of the Faith. For me that bespeaks to the power of Pope Benedict xvi, who is