The devil may wear Prada — but the pope does not. 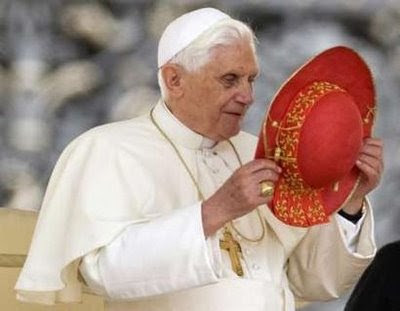 (AP) — According to the Vatican newspaper L'Osservatore Romano, the bright red loafers that Pope Benedict XVI wears are not designed by the Milanese fashion house, as has long been rumored.
"Obviously the attribution was false," the Vatican newspaper said in its Thursday's editions.
"Such rumors are inconsistent with the simple and somber man who, on the day of his election to the papacy, showed to the faithful gathered in St. Peter's Square and to the whole world the sleeves of a modest black sweater," it said.
Still, Benedict's fashion sense has often drawn media attention.
Three years ago around Christmas, he showed up for his weekly public audience in St. Peter's Square wearing a fur-trimmed stocking cap that could have passed for a Santa Claus hat. The hat, as it turned out, is a "camauro," which dates back to the Middle Ages and figures in many papal portraits.
On a separate occasion, Benedict sported a sumptuous red velvet cape trimmed in ermine — another piece of traditional papal attire that had long been abandoned.
L'Osservatore Romano said the pope's interest in clothes has nothing to do with fashion and everything to do with liturgy — what symbolism traditional garments can bring to the Christian liturgy.
"The pope, therefore, does not wear Prada, but Christ," L'Osservatore said.

You see it is his continuity thing again.
Well actually the Pope does, or used have his cassocks made by Euroclero, one they made for me had the privelege of hanging up next to one marked, "Emm. Joseph Card. Ratzinger", their shop was just across the road from his office.
The rather splendid summer straw hat Frere "B" informs me comes from Gasmmerelli's: he has one, the cost for the black, version cost him 60 euros, very practical in the Roman sun.
at June 26, 2008

Good heavens, an intelligent story about the pope from Associated Press.

It really is the end of days.

:-D Yeah, but every American kid has a red or white cowboy hat just like the one he's about to put on.