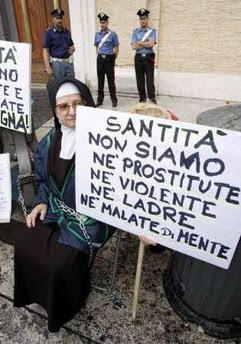 (Reuters) - Two elderly Italian nuns chained themselves to a lamp post outside the Vatican on Sunday claiming they had been wrongly expelled from their cloistered convent and wanted Pope Benedict to help them return.
The two women, Sister Albina Locantore, 73 and Teresa Izzi, 79, remained in locks and chains on the edge of St Peter's Square for several hours, including the some 20 minutes while the pope delivered his weekly message and blessing.
The two women told reporters they had left their convent of Carmelite nuns in central Italy for several months for health reasons but when they returned the mother superior refused to let them back in the cloistered convent.
The mother superior accused them of disobedience and banished them, the nuns said.
One of the nuns held up a placard reading: "Your Holiness, we are neither prostitutes, nor violent, nor thieves, nor mentally infirm".
Another placard appealed to the pope to investigate their case.
"After 50 and 60 years of service to the Church they treat us like sacks of garbage, all because we supposedly did not obey our religious superior," Sister Albina said.
The Vatican was trying to arrange a meeting between the nuns and an official of the Vatican department that oversees convents.
at June 09, 2008

Aren't they disobeying their superior again by protesting in this way?

VL: You do have to make sure that just because someone is "the superior" they themselves haven't gone round the bend with alzheimer's, or become unjust. Power tends to corrupt. I'm not necessarily saying this is the case, but history is replete with unjust actions of those in power.

They left the convent "for health reasons"
?
Surely the Mother Superior knew that. Unless she was the cause of their ill-health.

This story doesn`t make any sense. Are the nuns better now then ?

When I think of the suffering of Poor Father Dolindo and how he responded to it in obedience.....

They were AWOL for months, I think there is some grounds for dismissal here.

Also I would think there is a better way of getting justice, if they have a case than causing scandal by chaining themselves to lampposts.

For Carmelite nuns to be in such distress I 'spect they probably have good reason. There may well have been a reason they were AWOL for months...like health!

Either way it bears further investigation rather than just turn a blind eye. They must have been pretty desperate!

Umm ... why are a 73-year-old and a 79-year-old vehemently insisting they are not prostitutes? Are they batty or what?

Typical, a lifetime of service and what do you get in return? Not even a chance to spend one's life continuing in prayer and service.