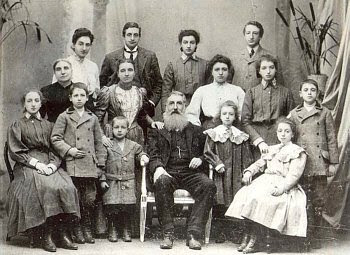 One of my vices is that I spend far too much time having coffee and talking around my kitchen table after morning Mass.
A few days ago we were speaking about Catholic education, my views are well known, I am a wholehearted supporter of primary school, my support for Catholic secondaries (12+, for Americans) is a little more muted, I want to be convinced, and honestly, thinking up an alternative within our parish structures is beyond me.
Our conversation went thus:

A visiting priest suggested one of the problems was the high number of convert clergy in our country, men who have never experienced firsthand Catholic family life.

Thank you for your post missam coffee reflections, dear Father. I always agreee with what you have to say about things liturgical and pastoral. However, this morning's post has left rather a bitter taste in the mouth. Convert clergy are no more likely to be unable to speak of a catholic family life than cradle catholics who may very well not have experienced it either! My (personal) experience, being one of them, is that convert clergy normally preach vigorously about vocations, personal morality and Confession; and do so oten, to the annoyance sometimes of the "modern catholic" laity and clergy.
Just a reflection.
Fr Christopher Back

In my experience convert clergy are gold dust. The ones I have encountered seem to understand the faith better. Maybe it is because they have had to make a positive choice for the faith. So I would have to disagree with your visiting priest. Having said that my experience is limited.

As regards the schools I think the parable of the sower is helpful. From this we know that for the seed to take root.

1) It must be spread in the first instance.

2)The soil must be prepared to receive it.

2) The soil. This is a more difficult issue because there are external factors which poison the soil over which we have little control. People live in a time when societies are infected with materialism and relativism. It is very difficult for them to discern objective Truth when it is presented to them. They are under a cloud of blindness.

2) Small protected educational environments where the young saplings can grow strong in faith so that when they emerge they can withstand the tempest. Some people say that unless you expose children to worldly ways they will not be properly prepared for life when they emerge as young adults. I would have to disagree. The light of Christ never blinds. So I think the solution is small primary and secondary schools staffed with intelligent and committed Catholics with a syllabus centered on Truth which is Christ.

3) God's terrible chastisement where humanity is brought to it's knees with suffering so that all he can do is turn to God, his last hope and in doing so he learns that He is always his first and only hope.

Catholic family life is doing ok in Latin countries, where you see whole families going to Mass, praying the Rosary at home and going on pilgrimages together. In Britain, one problem is marrying out. There are not enough Catholic singles pairing up. British Catholics end up marrying atheiests or Protestants. Birth rate decline and late marriages don't help. So irregular marriages produce irregular children, and irregular families. It's hard for a Catholic parent to keep a Catholic home if the spouse is in opposition. Children grow up divided and confused, and ally with one parent. Result: family breakdown. One solution is to get younger Catholics together more so that they might inter-marry.

Father, people like sitting around your kitchen table having coffee with you because it's like family life!

That is one point of view, but it is certainly not my experience of convert clergy (I hold my hand up as a convert myself); rather, priests such as yourself, Fr John or Fr Tim are the exception. Every convert priest of my acquaintance has shown himself to be a loyal proponent of the Magisterium. It's not convert clergy who fail to teach the faith, but cradle Catholic priests of a certain generation who have spent the last forty years “being Church”, rather than building the Church.

These are indeed important points to ponder though I must admit that I had never thought of convert clergy as being a 'problem.'

When I first plucked up courage to ring the doorbell of a presbytery for the first time, the priest who answered it turned out to be a convert. I'm pleased to say that he later received me into the church so I certainly do not regard convert clergy as problematic although I can see the point made.

In a way is not the argument that they have not had a Catholic family life similar to people who complain that a priest is unmarried so how can he advise on married life? Doctors do not have to suffer illnesses in order to understand and treat them.

Sadly I have a personal interest in the subject of marriage breakdown - my eldest son is now divorced and I have seen first hand what it has done to our family. Several friends too whose children I have seen grow up from toddlers have also suffered from their children's failed marriages.
We do wonder where we went wrong.

I am a convert, and the priest who made this comment was a convert.
It is thought, I haven't worked through it.

Most of us "born catholics"have tended to take our Faith for granted and have been running on "Auto" for over half a century.

It takes a "convert priest" to put us back on the straight and narrow.

I have never really been able to converse properly with any priest before but thanks to you Father Ray it seems to make it all worthwhile.

Arn't we all converts? I'm a revert if there is such a thing...

Aren't we all converts ? unless we undergo a daily, regular conversion, we are no better than Pharisees.

The problem with the schools, as with other areas of public life, in which the Catholic voice needs to be heard and witnessed, is that too many have ducked out and gone for the soft option.

Many have been called, but few have responded. It is, after all, a vocation....

As a convert, but not a priest, of 11 years, I think I understand what the visiting priest was saying. Converts often do understand the faith better because of the intellectual processes needed for adult conversion, but the lack of Catholic experiences seems to me a real hindrance in certain ways.

I have three children and I have to rely in many ways on my wife, a cradle Catholic, for a sensible approach to catechesis. I think I'd know how to raise Evangelical Calvinists better than I do Catholics since my own understanding of Catholicism is still in some ways "filtered" through my changes of mind. My own knowledge of Catholicism came through the head, so it's hard to just "live it" in any sort of normal way. Many friends of mine who are converts express a similar sort of worry. If I ran a Catholic school I think I'd have the same problem. Or is it simply a worry?

I don't believe the thing about convert priests being the problem. There are two things without which Catholic secondaries won't work; support from Catholic parishes, and support from Catholic families. Catholic secondaries are comprehensive which means a) that they take in everybody, not just the children of "nice" parents; and b) that their results won't be as good as grammar schools'. So that means that a lot of Catholic families refuse to support the school.

In that case, the onus is on the Parish: if the "good Catholic" parents have some casuistical reason for sending their children to a secondary other than the Catholic one, the priest has a hard choice: alienate some of the few practising people with school age children, or acquiesce. And then if you live somewhere that goes for joint Anglican/Catholic schools, you will have the parish forcing you to choose between a state school where the sacraments are never celebrated or, like Liverpool (see last Sunday's catholic Herald), church schools where the sacraments are never celebrated.

Family - School - Parish. It should be a firm triangle: in practice it's three isolated dots.

I think some of you may be overly worried about not having experienced such things in the home. What you lack for person experience as a youth is countered by having to go through the intellectual exercise of coming to the faith. PRiests who were converts are the least of our problems!

The family in the photograph certainly didn't fail. Although there were plenty of them, they also took in the future Saint Gemma Galgani to live with them - and one of the children has just recently been declared Venerable.