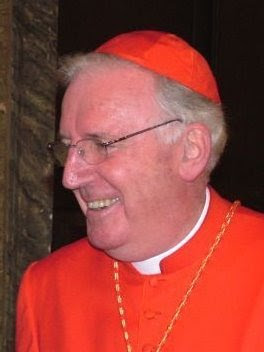 I found this on the Mail Online, I hope it is true, I am sure that there has been a lot of negotiation behind closed doors but there has to be time when the Church and its bishops, yes and its priest too, have to stand up and face down our secularist state. God bless the Cormac.

A Roman Catholic adoption agency headed by Britain's most senior Catholic churchman is to defy the Government over its controversial gay equality laws.
The Westminster Catholic Children's Society, whose president is Cardinal Cormac Murphy-O'Connor, will ignore new rules that require it to place children with same-sex couples.
While other Catholic adoption agencies are caving in to the legislation by severing their ties with the Church or even closing, the Westminster Society will continue its policy of placing children only with married heterosexuals and single people.
Its stance will set the Cardinal - who welcomed Tony Blair into the Catholic Church last December - on a collision course with New Labour and the gay rights lobby.
It is a high-risk strategy that could provoke a costly and bruising test case in the courts, with campaigners determined to see the Society closed down.
But advisers to the Cardinal, the head of the Catholic Church in England and Wales, believe they have found a legal loophole that could allow the Society to remain open and loyal to Catholic teaching, which opposes gay marriage and adoption by gay couples.
The Government, which forced the Sexual Orientation Regulations through Parliament after a bitter Cabinet battle and in the face of fierce opposition from religious leaders, would be severely embarrassed by a defeat in the courts.
Ministers were already reeling last night from a leaked report commissioned by the Church of England, which accused them of favouring Muslims over the Established Church and creating a moral vacuum in the country.

Yes Father,"God bless Cormac" Somebody has got to stand up to the Vegetarian,Trick Cyclists and Comic Singers that seem to be running this country now.

The CofE have got themselves in hock to the Devil but we must fight them every inch of the way.

If it does come to a court case we shall be victorious and then perhaps we will see an end to the silly nonsense that is dragging us all down.

That is good. Stupid and evil laws should be tested in the courts. All the way up to the House of Lords and then to the European Court if necessary.

I suspect the law will fail in the face of a challenge. In any case, who is going to bring a charge? Would the adoption society be guilty of a criminal offence? If so, would the DPP actually bring a prosecution? I can't see it happening myself even given the prevailing mood of stupidity.

Yes, the law has to be tested in the courts.

I see from the Catholic Herald (6 June 2008) that Bishop of Lancaster is prepare to fight.

His argument seems to be : any charity operated only in accordance with the religious principles of the Catholic faith would be protected by the freedom of religion clause in the Equality Act 2006.

It would make an interesting test case.

Good for the Cardinal.

As regards this statement:
"It is a high-risk strategy that could provoke a costly and bruising test case in the courts, with campaigners determined to see the Society closed down."

I would contend that Catholic adoption organizations are ALREADY closed down if they have been complying with the new laws. I would no longer consider them Catholic.

I wouldn't put my faith in European Courts....what have they done for anyone other than decide how your bangers are made or take away your rights? If "everyone" is in charge NO ONE is in charge and more importantly, no one is accountable.

Yes, Cardinal Cormac should be praised for his stance. He has received so much criticism in the blogosphere recently it is quite a relief to read this.

Good on Cormac. It probably will go to the Lords. This is quite a historic development.