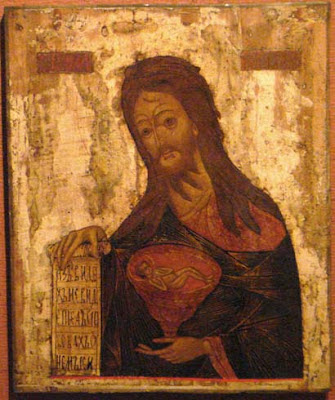 The Voice was concieved in silence, his father dumbed by the angel in the place of sacrifice.
Already the he who would be the Voice had leapt at the presence of the Incarnate Word.
The writing of his name opens the mouth of the priest.
In the silence of the wilderness he speaks.
The Voice of the priest awaiting The Offering.
The Voice, the priest's son cries in the silence of the desert to prepare the Way of the Lord.
The priest: Behold the Lamb, the Victim, the Priest, the Eternal Word, the one who takes away the sins of the World.
In the desert is announced the one who will enter the desert of death.
The Word to speak to those dwelling in everlasting silence.
at June 24, 2008