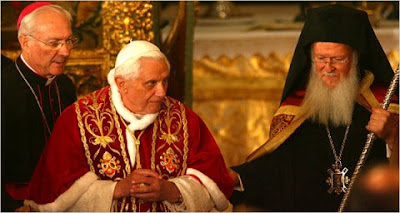 Damian Thompson has an interesting piece on the prospect of an Anglican bishop seeking Unity with the Holy See, there are rumours of a large group of Episcopalians in the States and Anglicans from elsewhere "coming over". As Prefect of the CDF Cardinal Ratzinger was responsible for creating a way for Episcopalians/Anglicans to be part of the Church, yet retaining there Rites etc. The same structures were apparently offered in England but rejected by Cardinal Hume and our heirarchy.


In Constantinople the Patriarch has suggested a sort of unity with Catholic Byzantine bishops, who will still remain in communion with Rome, I have not seen much detail but it seems unlikely to have been postulated without Papal involvement.

There is also the Chinese Patriotic Catholic Church and its reconcilliation with Rome.


The speculations regarding the SSPX's proposed reconcilliation, "along the lines", said Bishop Fellay, "of the Chinese Patriotic Catholic Church", all suggest the Pope doing something quite exciting and forming a new ecclessiology. One which gives a greater plurality to Churches, bishops and even priests.


It seems as if we are returning to the first millenium's less monolithic concept of the Church, one that respects diversity in liturgy, and even a certain diversity in theology; note the SSPX seem to be being asked not to affirm Vatican II, merely not to deny it. There is a new and exciting ecumenism afoot, one that springs from the Tradition of the Church and has the Papacy at its centre, rather than seeing it as problem. As in the New Testament Peter underpins both unity and diversity.

On 16th June Prof William Oddie was interviewed by Marcus Grodi for the Journey Home programme. During the programme Prof Oddie mentioned the refusal of the English bishops to consider an Anglican Use Rite in the Catholic Church of England. Oddie opined that the reason was because the English bishops didn’t want too many Pre VII Anglicans in the Church.

Interesting? I find this a little confusing. I do not have any objection to a diversity of rites but diversity of theology? I do not appreciate Mr Thompson implying that Vatican II introduced a new theology. I appreciate the council was hijacked and many have been led astray. However, this needs to be corrected not accepted surely. Truth divides and we must accept that so I'm not sure I'm convinced by this new Ecclesiology as presented here.

Chris, I think "communion" is too strong a word "in union with" is better, a bit stronger than "in conort with" or "in harmony with".

Ma Tucker, The SSPX would percieve VII, as a new theology, there is a need for unity in dogma and clearly stated doctrine, but there is wiggle room.

I hope and pray that both the high anglicans and the SSPX come over with a personal prelature, not least because this would undermine the ability and power of certain E&W bishops to keep resisting the direction of Rome, which is rightly determined to integrate Vatican 2 with the tradition of the church by correctly interpreting its documents with due regard to that tradition.

The ability to react to dreadful liturgy or downright disobedience by attending the local Anglican Use or SSPX chapel instead and paying your money into their collection plate will have much the same effect on the Catholic Church in England and Wales as the loss of BTs monopoly had on the telecommunications industry.

Prior to this bills were high and you waited weeks to get a phone connected, once there was competition this changed rapidly.

If this happens the tabletistas will be left with a choice. Tow the line or lose your flock.