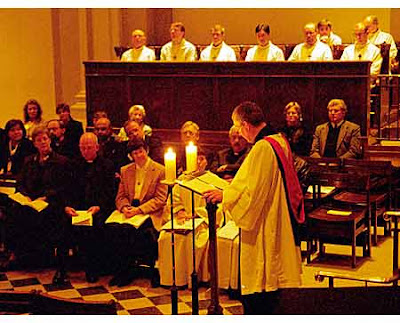 I yawned when ARCIC III, the 'Anglican Roman Catholic International Commission' was announced during Dr Williams' visit to the Holy Father last month.
What is its purpose, what good does it do? The commision comes out with a nice little statement, saying basically there is barely a fag paper of difference between us, then you yawn through the document and realise they've only looked at easy questions, and the vast majority of Anglicans you know really wouldn't agree with what has been said, and the Catholics have applied the most liberal interpretation to the Church's teaching possible, the participents and ecumaniacs grin ear to ear with self satisfaction. Then the dear old C of E does something, normally of a moral nature, which makes unity even more impossible. After this process, in the past, that nice reasonable Cardinal Ratzinger puts lots of question marks in the margin and writes at the bottom of the paper "D+, probably couldn't do much better".


... if Rome had any sense, she would require ARCIC, instead of picking over sixteenth century disagreements that comparatively few people care about, to engage with the newly emerging areas of disagreement, particularly 'life' issues and sexual matters.


He then points out the this is what is actually going to happen!
at December 22, 2009

Michael,
Reducing everything to Papal Infallibity is an old liberal Protestant trick.

There is also the indefectability of the Church, the inerrancy of scripture; ultimately the authority of Christ and the nature of the Trinity. The role of the Pope is dependant those things, not their cause.

I was commenting only on what Rowan Williams said, and it's not without merit. If you believe in papal infallibility, you will by definition be a Catholic.

(a) the indefectibility of the Church the principle of which would seem to be the sacraments as valid ex opere operato,

(b) the infallibility in credendo of the universitas fidelium and of the College of Bishops (however defined) in docendo.

In that case you will almost certainly be Eastern Orthodox. You certainly won't be a Protestant.

All Christians believe in the inerrancy of scripture and in the authority of Christ and the nature of the Trinity. The unity and trinity of God and the Incarnation, death and Resurrection of Christ are what distinguish Christians from non-Christians and what serve as the foundation and cause of the role of the Pope. The other things are principles of distinction among Christians themselves.

Not in Orthodoxy. The Church is indefectible because she is the "ground and pillar of truth". These considerations of "validity" and the scholastic categories upon which they depend (ex opere etc.) are quite alien to the Orthodox understanding of the Church and of the Mysteries.

Michael,
"All Christians believe in the inerrancy of scripture"
Really?

"and in the authority of Christ"
Strikes me this is what the "gay" debate is about in Anglicanism.

"and the nature of the Trinity."
Do many non-Catholics / Orthodox really understand a God who is Triune? Most non-Catholics I meet seem not to understand Jesus is truly God and Man, without co-mixture. Nor that the Triune God is by nature a God who reveals himself.

My experience too, Fr Ray. A colleague recently said to me "What I really can't accept about the Catholic faith is that you say that Jesus is God" I asked "So what are you? A Jehovah's Witness?" He replied "No. I was brought up a Methodist." That made me laugh "You obviously weren't paying much attention at Sunday school then."

In interviews over a number of years, Rowan Williams has said that papal infalibility was the key stumbling block which prevented him from converting to Catholicism when he was around 17. His justification was that intellectually he couldn't get comfortable with the notion that someone could be infallible. It always felt a somewhat weak argument to me.

Let me take these points one by one.

(1) All Christians other than liberals and modernists believe in the inerrancy of Scripture. That begs the question of whether those who don't are really Christians.

(2) All Christians believe in the authority of Christ. Those who do will agree with what the Catholic Church teaches, that homosexual acts are acts of grave depravity. An Evangelical Christian, Lilian Ladele agrees. She recently lost her case in the Court of Appeal against unfair dismissal from her job as a Registrar for refusing to conduct civil partnerships.

So obvious to reason is the natural truth that God created Adam and Eve, not Adam and Steve, that one wonders whether those who dissent are even personally truthful, let alone Christians.

(3) That's a bit of a wide definition, Father. Are you saying that the Orthodox have it entirely wrong on the Trinity, or are they sufficiently right? True,they don't use the filioque in the Creed, but neither do the Eastern Catholics.

It would be news to me that the Orthodox on principle, and Evangelicals in practice, do not accept the Ephesian/Chalcedonian formula that Jesus is a Divine Person with a divine and a human nature united without confusion or change, without division or separation.

I would reformulate your last point to read that God is a God who has discretion as to whether to reveal Himself or not. It's the preambles of faith which are non-contingent.

Attending my son's catholic church I have several times heard preachers explaining to the congregation in fairly simple terms that Our Lord Jesus Christ was not just a good man but also God made flesh. It would seem to me that some Catholics have a doubtful grasp of the doctrine of the Incarnation otherwise such sermons would not be required. It is not only the C of E , which recites in its services more creeds than any other body than Christendom, that has ill instructed members or needs to hear basic concepts from the pilpit.

As regards the Papacy I was amused to read in Abbot Butler's book on the 1st Vatican Council that Pius IX said in response to a suggestion that bishops were witnesses of tradition "there's only one:that's me" (p355). Butler comments in a footnote - in saying this, if he did say it, Pius spoke as "private theologian".

Michael, I think you misread Father's reply. By:

Do many non-Catholics / Orthodox really understand a God who is Triune?

I took him to mean "Do many non-Catholics/non-Orthodox..."

Right, Moretben, English was never my first language.
Michael, I understand Christians, perhaps incorrectly, as those who define themselves as such.

What are the chief mysteries of Faith which every Christian is bound to know?

The chief mysteries of Faith which every Christian is bound to know are the Unity and Trinity of God, who will render to every man according to his works; and the Incarnation, Death, and Resurrection of our Saviour.

In a little light relief on such a serious matter I was told that a cardinal in 1938 asked Cardinal Eugenio Pacelli whether there was going to be a war. Cardinal Pacelli answered and said there would not be. Soon afterwards, of course, he was elected Pope and Became Pius XII and also, of course, war did break out. Later on the same cardinal approached Pope Pius XII and reminded him that he had said there would not be a war. "Ah," said Pope Pius XII, "But we were not infallible then."

I am a little concerned Fr Blake about you describing the role of the Papacy as dependent. How please can this be reconciled with the Papacy as being the guarantee of membership of the Church? How please can it be reconciled with Papal Infallibility being exercised in definitions irreformable of themselves, and not from the consent of the Church? How in the last resort is Tradition to be indentified especially if it is granted that doctrine developes and may even be merely implicit in early times?
Your view is very attractive but it would not appear to be the view of for example the second Archbishop of Westminster, HE Manning who magnifies the Papacy in a manner which you ascribe to liberal Protestants.

Furthermore since the present unhappy divisions are the result of events in the 16th century surely thse matters should be cleared up ,together with of course modern matters such as the purported ordination of women, abortion, and sexual activities outside marriage whether homosexual or hetereosexual. Both are necessary as many of the Reformation issues were on matters of substance.
Your blogs are always well worth reading and I for one derive much profit from them. Thank you.

Indi.
The doctrine of Infallibility rests on and developes from God's fidelity to his people, Christ's promise to be always with her, the H Sp's leading her into all truth.
We managed without it its definition for 1,800 years, it is important but subsidiary: Trinity, Incarnation, Sacramentality properly understood lead us to it.