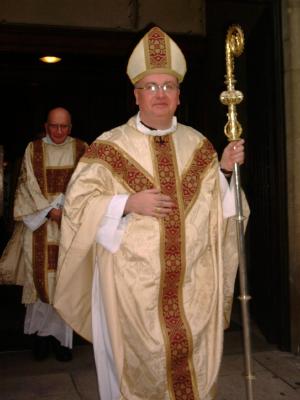 There is noticeable sadness on some blogs about the retirement of the Archbishop of Southwark, Kevin McDonald, though possibly to some people not a total surprise, he has been suffering from ill health and it effects for some time. I was speaking to a priest recently who was telling me how kind the archbishop had been over the death of one his parents.
His early retirement means that three of our four Archbishops will have been replaced under this pontificate and as significantly under this nunciature. It is inevitable that bishops are chosen from a tiny of number of clergy who are brought to the Nuncio’s attention and the Nuncios we get tend to be awaiting their own retirement. I remember one old priest referred to the then Pro-Nuncio as “the prisoner of Wimbledon Common”.
Archbishop Faustino Sainz Munoz did outstanding work in his previous appointment in the Congo, opening up the Nunciature to Rwandan refugees during the civil war. Let us pray for him during this time of discernment.

Apart from a bishop who believes in God, and the teaching of the Church I pray the diocese of Southwark is given someone who not only wants to know his clergy but will also care for them and  love them, then the work of God can be done in a diocese.
at December 04, 2009

You don't think then that Bishop Conry will follow his predecessor Michael Bowen to Southwark?!!

Our last two bishops became Archbishop, so who knows what Rome might do.

I watched Abp Dolan on EWTN and in the course of the programme Abp Dolan mentioned in passing that he had written to former priests in his archdiocese to introduce himself to them and ask how they were faring. This, I thought, was a truly pastoral action.

While on the topic of Abp Dolan I would recommend his book: Called to be Holy

"The path to holiness is travelled step by step. The way of holiness is lived grace by grace." He examines the Gifts of the Holy Spirit and speaks of "how to be a good steward of these gifts as you hear and answer God's call."

Do you mean three of five Archbishops? Westminster, Birmingham, Liverpool, Southwark and... Cardiff..