Four, only four, in St Peter's 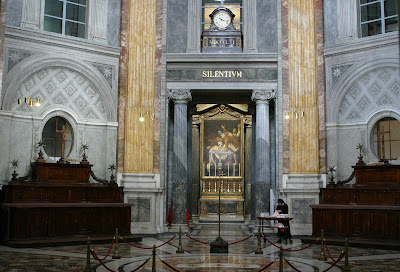 The sacristy of St Peter's, Rome, I mean the basillica, not some little church in suburbs, have acquired four, that is 4, Missals of the Blessed John XXIII  for the use of clergy who might want to celebrate Mass in Usus Antiquor.
Now, when I am in Rome in January with Fr F and we will require half of their supply. I am sure we will have to bring our own altar cards. For a year or so after the promulgation of Summorum Pontificum the only place the Traditional Mass was permitted was the Hungarian Chapel, changing that took the Pope's personal intervention.
Last time I was in Sr Peter's early in the morning, about 18months ago, I counted at least four priests, all young of course, offering the traditional Latin Mass.
You might suggest the Pope's Basillica was still in the hands of the reactionary old guard, I couldn't possibly comment.
Despite what Redemptoris Sacramentum says has anyone ever seen a communion plate there?
at December 21, 2009

Four missals, what a joke, of all places one would expect the Vatican to have a few 1962 missals. I personally have one as a lay man. Altar Cards, I imagine there are some most splendid altar cards stashed away somewhere in the vaults of the Vatican.

Hopefully the old guard of Cardinal Noe will not be so brute, as they were in the days of JP II, to remove priests in middle of mass for saying the old rite cladestinely.

Why not put your altar cards on a USB stick, get a copy printed when you arrive and leave it behind afterwards?

Photocopy the propers and readings for while you are away and there you go.

You can download a nice pdf of a set of altar cards here
http://www.rosary.freeuk.com/downloads/altarcd.pdf

Yes, you will have to take your own altar cards and a maniple. Also be prepared to wear vestments of the day according to the New Mass not the Old Mass. Don't expect the server to know the resposes either!

I went to Rome this weekend with a group of friends and on Saturday morning in St.Peter's, The first three Masses we saw being Celebrated were in the EF... it was Marvellous!

a few years ago, the head sacristan stopped a priest going out to his altar,for carring altar Cards.

olovemj says 'don't expect the server to know the responses'.

At this mornings Mass I could not help noticing that neither of the two servers present was able to recite the Creed - and it was in English!

Yes I know I should not have let my eyes wander but I was recovering from seeing an 84 year old Priest 'doing' the Clapping Gloria and hearing him talk about 'God our Father and God our mother.' I once said that I would explode if I heard another Clapping Gloria - I am however still in one piece - but only just!