The Glazes of Christmas 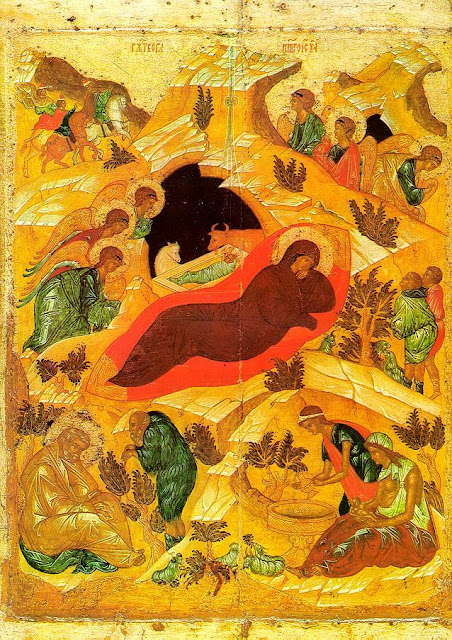 I love these Christmas feasts, like today's, the proto-martyr following immediately the birth of Christ. His blood and sweat amidst the Palestine stones, echoes the blood and water of Christ's birth amidst the Bethlehem straw. His birth, the birth of the Church, the suffering of the Christian are thrust into our minds. There is more blood with the Holy Innocence, slain children, innocence defiled, cruel kings, exile. There is  St John who raises the mind to sublime heights in holy purity glimpsing the essense of God himself. There are popes and bishops whose blood was slain between the altar and sanctuary acknowledging the fragility of Christian faith, its pastors being crushed by emperor and king, throwing their flocks into turmoil.

The Feast of the Holy Family, introduced by Leo xiii disrupts these glazes laid over the centuries, its post concilliar movement into the Christmas octave really does a violence to the liturgical rhythm and interplay of feasts, but it too reminds us of the fragility human nature, of lost children, of exile.

The modern sanitisation of St Joseph is opposed to ancient imagery. He was portrayed, somewhat as a modern man, tempted to doubt and rationality. The little old man, clothed in skins, leaning on his stick, is "a worldly wiseman", an image of his doubts as he cogitates on the mysteries he has encountered. The old man is the direct contradiction of infant which the Virgin conrmplates in her heart with tender love. Joseph needs God's direct intervention to overcome his confusion.
It is all part of the glorious confusion and mess the God-man steps into in the Incarnation.
at December 26, 2009

Excuse the thud as I fall off my chair!

Father plus Mother plus Child equals, I think, Holy Family.

Last Sunday, someone came up to me after Mass and asked a question he already knew the right answer to.

Did the Incarnation take place at the conception of Jesus or at His birth? Shouldn't we be celebrating the Annunciation as we celebrate Christmas?

My answer was that the angels went public with their rejoicing at the Nativity, as opposed to the private visit of Gabriel to Mary at the Annunciation.

The reason? As far as the Jews are concerned there is a Demise of the Crown only at the death of the Prince of the Blood who then possesses it, or else at his abdication such as David executed in favour of Solomon.

We know Jesus was born King of the Jews. He could have been so only if Joseph had expressed his intent to abdicate with effect from the Nativity.

Yes, Christmas is a epithany.
I think orthopdox Catholicism takes a deeper understanding of Christ's descent from David than that.

A lovely post, Father. I like your allusion to the martyrdom of Stephen as "the birthday of the Church" - which it is, of course. The Church has several "birthdays", mirroring our own "multiple births" - our nativity, baptism and birth-in-death. It's more usual of course to think of Pentecost as "the birthday of the Church" pre-eminently, but the Fathers recognised that the Church has in fact existed from the beginning of the world, and that the Tradition is her "ancestral memory", from the Garden of Eden up to the present day. When one understands that this is so, the unity of Old and New Testaments is restored, and Tradition understood in its fullness as nothing other than Scripture, all of it, as read and "realised" in the life of the Church. Then, all these characteristically modern quibbles about how to distinguish big-T Tradition from small-t "traditions" are seen simply to evaporate. The modern mind is inhuman. It hates mess, multiplicity, ambiguity, non-linearity. It demands the reduction of Tradition to some series of core propositions independent of form or circumstance. This is pure iconoclasm, and it cannot be resisted too strenuously. Like all iconoclasm it ushers in nothing but confusion, disintegration, sadness and ultimately, the loss of the very "core propositions" it seeks to identify.

How much is enough? - only everything. Through the prayers of St Stephen and of all our holy fathers, Lord Jesus Christ our God, have mercy on us and save us. Amen.

Moretben,
Yes it is why iconography, is such a important method of communicating and contemplating theology, type and proto-type, juxtaposition and parallel, metaphor and example are often more subtly expressed in paint than words. What more eloquent expression of the Trinity than Rublev's?
Joseph here I suppose represents a Apophatic approach - with its dangers - to the Mystery, the Blessed Virgin a Cataphatical one.

On my way home from Midnight Mass the, otherwise very pleasant, taxi driver berated me for celebrating Christmas on 25th December when Christ (so the taxi driver said) was actually born on
January 7th. I have heard of some traditions keeping Christmas on 6th Janaury but not 7th.

However, I know better than to argue (or discussion religion/politics) with a taxi driver, especially one who enabled me to be in bed by 1.31am

Ah, a Coptic Orthodox, 2/3 of Brighton taxi drivers! thank you for playing for us Malcolm.

Every tradition keeps the Nativity on December 25th. It's just that if you've clung to the Julian Calendar you're now 13 days "out" - so December 25th falls on January 7th. Your taxi driver was an "Old Calenarist!"

Today in the "New Calendar", in a perfect piece of symmetry, St Stephen is joinded by two confessors of the Iconoclast crisis - Saints Theodore and Theophan.

Taylor was a leftwinger, an associate of the Labour Party Campaign Group and a staunch Pro Lifer.

A Christian, he was also deeply opposed to bigotry. He wrote to The Universe in 2007 deploring Mary Honeyball's attacks on Catholics generally and Conor McGinn specifically.

When I say we will not see his like again, I really mean it.

David Taylor was one of ours. Requiescat in Pace.

"Every tradition keeps the Nativity on December 25th."

Not quite. Some of the Oriental Churches have never developed the differentiation between the Nativity and Epiphany and so e.g., the Armenians keep 'Theophany' (Nativity-Epiphany) on January 6th, nothing to do with the Julian Kalendar.

Their Old Kalendar adherents keep their 'Christmas' on what we would call January 19th.

Early Kalendars have more comites Christi saints with a cluster of Apostles following SS Stephen, John and the Holy Innocents.

I would agree entirely with Fr. Ray's sentiments about the effect of the Holy Family feast.

Joseph here I suppose represents a Apophatic approach - with its dangers - to the Mystery, the Blessed Virgin a Cataphatical one.

I've been puzzling over this since you posted it, Father. To me it seems precisely the opposite: the Theotokos is reposing "apophatically" in the revealed presence of the God-man; whereas St Joseph, insofar as he's troubling to place events within the context of "worldly wisdom", is involving himself in "philosophical" speculation.

Thanks for that. Would it still not be true, though, to say that every Tradition which celebrates the Nativity as a distinctive feast, keeps it on Dec 25th? I always understood that the primary subject of Theophany/Epiphany was the Baptism of Christ, and that only much later in the West did the Magi come to predominate.

Father, you know better than I that the Eastern Tradition has always identified as "dangerous" a cataphatic approach which is not strictly subordinate to, and kept firmly in check by, the dominant apophaticism of the Fathers. It would therefore be astonishing to find the opposite principle enshrined in a canonical Orthodox icon.

Moretben,
I think you are right, it was an "off the top of my head remark", a confusion in my western mind with apothaticism and skepticism, common today.

I was thinking of the significance of O.Lady. facing away from the Lord, what she is doing is "pondering in her heart", reflecting on what she has seen and touched inthe immediacy of the Incarnation with what she knows of the infinite God.