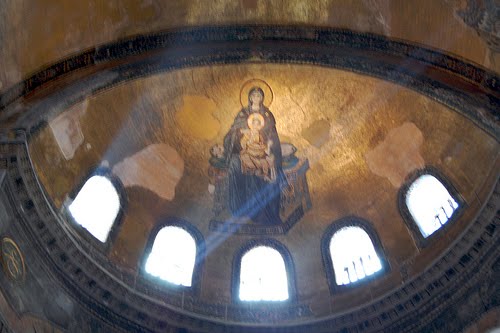 Ultimately God is unknowable, all we say about God is meaningless. God is mystery. I suspect it is one of the attractions for people, especially young men in my parish, in the Traditional Latin Mass.


Christianity is about Revelation, God revealing Himself in His Son and in His Church.

The language of Revelation is “gender specific”. God becomes Man, specifically male. He reveals the first person of the Trinity as “Father”. In a recent email discussion with an Orthodox bishop friend this gender specific revelation was the significant reason for the ordination of men alone, the clergy are an icon of God.

For Catholics too, this is not an insignificant argument, maybe it needs to be taken more seriously.

Today it is tempting for liberals to downplay the masculinity of what has been revealed and to androgenise God. When that happens there is also a downplaying of the Blessed Virgin Mary, the imagery of the Church as Bride, Mother as Mistress. Traditionally the dominant image of the Catholic and Orthodox Church is the icon of the Mother of God. It is interesting too that the groups of women religious that grow are those which delight in speaking of themselves as “brides of Christ”.

I suspect that much of the success of the early Church’s missionary work was dependant on being able to identify God as Father. For a community consisting of women married off at young age, of slaves, whose bodies could be misused by their owners at will, sold off as children, whose fathers were likely to be their mother’s masters, or simply bred, as an animal might be, the notion of a loving Father must have been deeply healing.

In an age as abusive to children as that of the first centuries of Christianity the proclamation of God’s Fatherhood and the Church’s Motherhood is absolutely necessary.
at December 15, 2009

If I understand correctly, a father is one who gives life outside himself as the active agent of its transmission.

God can only be Father, not Mother, because motherhood connotes passivity in the reception of life. Since God is Prima Causa, He cannot be acted on by anything outside Himself.

While we're on topic of the all-male priesthood, here's a letter I wrote to the Catholic Herald in response to their headline last weekend about the new Equality Act which is expected to restrain the Church from insisting that priests be celibate single men:

If Harriet Harman - Batty Hatty as the Daily Mail has taken to calling her - thinks she can frog-march a Catholic Bishop into his own cathedral, force his hands onto a woman's head and make him speak the formula for ordination to the priesthood, she's probably right (Simon Caldwell, Article, 11 December 2009).

If she thinks she can imprison and fine a Bishop for deposing a priest who marries, enters a civil partnership or keeps a mistress or a boyfriend, she could probably get away with that as well.

But if she thinks she can prevent the Pope from defrocking any such priest or excommunicating a woman who presents herself for ordination, then Miss Harman has a problem. Short of reinstating Praemunire and the Act of Uniformity 1559, there is no way that she can force five million Catholics to pretend that they can fulfil their Sunday obligation and receive valid and lawful sacraments from others than celibate, canonically regular single male priests.

If Ms Harman has it in mind to use the Equality Bill as a persecuting law against Catholics, she would be well reminded that the International Criminal Court Act 2001 enumerates persecution as a crime against humanity which could land her in the Hague one of these days.

In the meantime we might as well major on the theme that this is the 450th anniversary year of the Act of Uniformity and only the 180th since full Catholic Emancipation. Ms Harman seems to be a worthy heiress to the older tradition that Catholics aren't welcome in this country. If she wants a battle, then let the Church march towards the sound of her gunfire and not away from it.

Brilliant letter from Michael Petek. I hope there are others in this week's Herald in a similar vein. Has Mr Petek sent a copy of his letter to Batty Hatty?

Regarding the forcing of Catholics to accept female 'priests', the trouble is there are some who would welcome them. I know at least one who is convinced that we will have them one day and she cannot see why this is impossible.

I haven't sent a letter to her, as I don't want to provoke her into going really off the handle and reinstating the Popery Act 1698,, or making it an offence for a Catholic to be within fiver miles of a city or owning a horse worth over five pounds.

I wouldn't worry about some Catholics who would welcome women priests. The all-male priesthood is an article of divine and Catholic faith, so these aren't Catholics anyway.

There's this difference between Her Majesty the Queen and Batty Hatty, save the obvious one of rank. The Queen is content to serve as the Supreme Governor of the Church of England. BH wants to be the Supreme Head of All Religion in the United Kingdom.

And here's me thinking that the Antichrist will be a man.

What say you now, Dr Paisley?

These are very wise words, Father. When we understand that the Church gives us true images (and real experience) of fatherhood and motherhood, sonhood and daughterhood, and that these answer to our deepest human needs, we can see that it has everything to offer the poor and downtrodden who often suffer grievously as a consequence of not having experienced these relationships properly.
Throwing away every idea about what it is to be a man, and what it is to be a woman, and trashing the rights and responsibilities both have, is something the church can never do, since to do so sacrifices reality on the altar of radical feminism. If Simone de Beauvoir had enunciated radical and indisputable truths, we should have nowhere to go. But since she didn't, and the vast majority of the human race that lives and breathes, looks and feels, knows that she didn't, we should be proud that we have not succumbed to an ideology that is profoundly anti-human and thus have everything to offer to the victims of it.

Scripture has also given us female images of God; eg, the hen with the brood under her wings. Moreover, there is a long tradition of viewing Christ as Mother giving birth both to the cosmos at the beginning, and to the Church from his open side on the cross.

In mediaeval literature the bishop or abbot is sometimes styled 'mother', and famously Julian of Norwich uses the concept of 'Jesus our Mother'.

So, we should be careful when we maintain what "the Church says" - She after all is the Body of Christ.

One shouldn't confuse simile with actuality!

I would be cautious of saying anything 'actual' about God at all, at least in any strong sense, by which we determine his substance. Natural theology can take us so far, and assigning gender even as 'role' to God is itself a similitude.

As Thomas says, it is more accurate to say what God is not, than what he is... other than He Is, and Bonaventure would add that He is Good - this is what is revealed, the rest is for cautious appropriation. Maybe this is why those like Bonaventure prefer 'Word' to 'Son' in their trinitarian theology.

The Eastern Orthodox are similarly concerned not to concretise our symbolic understanding of the infinite God. Here 'infinite' does not mean distant or separate from contingent reality, but all encompassing; so it is both true and inadequate to call God 'Father' as 'Mother'.