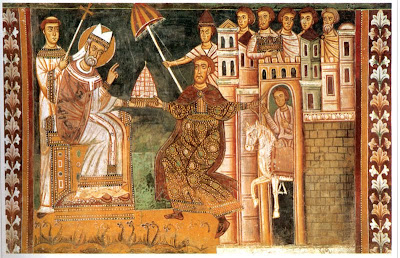 Today is the feast of Pope St Sylvester, during his pontificate the Council of Nicea met and the great Symbol of Nicea was proclaimed. I believe in God the Father Almighty
......
And in one Lord Jesus Christ,

the Only Begotten Son of God,
born of the Father before all ages.
God from God, Light from Light,
true God from true God,
begotten, not made,
consubstantial with the Father;
through him all things were made.
For us men and for our salvation
he came down from heaven,
and by the Holy Spirit
was incarnate of the Virgin Mary,
and became man.
...
The Council of Nicea exalted the true doctrine of the Incarnation, the consubstantiality of Son and Father, thus Sylvester becomes in a sense the father of Christmas.
Most significantly it was the first major act in the defeat of Arian heresy, that vile deviation of Christianity which denied the full Divinity of Christ and therefore the full salvation of man. Christmas is the great anti-Arian feast it is not simply about what God has become but what man might become. All those Christmas aspirations, for the poor and needy, for peace, reconcilliation and goodwill on earth, are part of orthodox catholic belief. Scrooge was an Arian - discuss!

Sylvester also engineered the Epithany of the Church under the Emperor Constantine, while he was Pope the Church leapt out of the catacombs, the great basilicas of St John Lateran, of St Peter and of Holy Cross were built in Rome, again the building of these huge churches, lavish places for lavish worship, were I suspect anti-Arian.
His reign marked a radical change in both Empire and Church, the beginning of the age of  the evangelisation of western Europe.
at December 31, 2009

Arius was a scrooge, as were the protestant revolutionairies

I pray that the present hieharcy in the vatican will recant to their heresy and fault and return to the tradition of the church., May the holy spirit guide the church.

Roberto,
I pray that you leave, heresy and schism and believe the Lord's words to Peter, and embrace the true faith.

I believe the Lord's words to Peter. I certainly don't believe them in the sense they came to be understood in the west, centuries after St Sylvester (who BTW was not present at the Council of Nicaea).

Of course he was not there Moretben, he was the Pope, not someone to be summoned by the Byzantine despot!

Arius died a horrible death, fully deserved , in a loo, in the same manner as Judas Iscariot.
Perhaps our own hierarchy will at last come to realise what a stupid thing it is to move the feast of the Epiphany to a Sunday so this year it is on Jan 3rd and next year on Jan 2nd. Big petition needed.
finally Mildew awards you the special Mildew award for best Catholic Blogger on the ~~English Scene. When I get to Brighton again I shall present you with a donation for your charitable works.

Arianism is alive and well Father; nowadays it is called Islam.

According to Newman "the whole world groaned and found itself Arian" and was saved from heresy by the faithful laity and St Athanasius.

The quote about the whole world groaning is actually from St Jerome who wrote it after the homoiousion Council of Rimini in 359 A.D.

Thank you Tom for correcting my faulty memory. I seem to have remembered a quotation by Newman as being his own work and was too lazy to check.