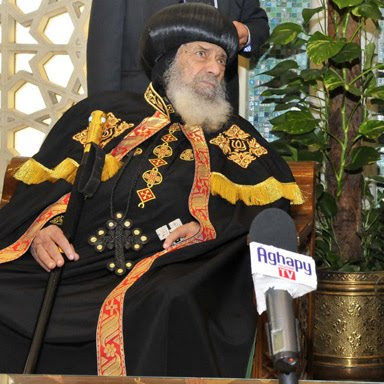 The Church with the biggest congregation in my parish is not some wild eyed hand waiving charismatic mega-metro church but the Coptic Orthodox Church of St Mary and St Abraam. Their priests are gentle, prayerful and ascetic, their children, there are many in our school, are well catechised and devout.
I am pleased that their first wedding in Brighton was here at St Mary Magdalen in the 1980s, with permission of course. A huge number of them left Egypt following a violent outbreak of persecution, which really was horrendous. Most Copts can tell of lynchings, burnings, rapes within their extended families. Today there is still a trickle of Coptic asylum seekers coming from the Sudan. Most of Brighton's taxi drivers and a fair number of our newsagents are Coptic Christians.
There is a great deal of concern that the Egyptian government are deliberately putting pressure on the Church again, by trying to force Christians to accept Islamic marriage law and forcing Coptic priests to marry those who are divorced under Sharia Law. Christian marriage had previously been protected by Egyptian law, it seems now that Christians will have to adopt Sharia practice, including the possibility of marriages being ended by the husband saying three times, "I divorce you."
The Egyptian press is vilifying the Pope (Shenouda III) for his reactionary, fundamentalist, outdated stance on the family!
Coptic Christians here are frightened that this is the beginning of another outbreak of persecution.
at June 17, 2010

The little wierd calvinist (only better and more rareified that mere calvinism) sect that we used to belong to had a good bit to do with Coptic Christians, while mainly trying to convert them to "real Christianity" of course - and yes, I heard awful stories. May God have mercy.

It's not only that, Father. There are fears that, when President Mubarak dies the Muslim Brotherhood may seize power or be elected to it.

Thankfully, Israel has the armed forces to slap the MB about a bit, and the Copts have a religion to offer them which is a kinder and truer alternative to the one they've got at the moment.

No wonder our ancestors crusaded.

I seem to recall that a couple of years ago the Archbishop of Canterbury called for sharia law to be adopted in the UK.

I seem to recall that a couple of years ago the Archbishop of Canterbury called for sharia law to be adopted in the UK...

The so-called "Archbishop" of Canterbury...

I once got a taxi from Brighton to Parkminster....the driver was a Shia Muslim who had converted to Christianity, he talked about "priests" I didn't think he meant Catholic Priests. I guessed he meant so form of Orthodoxy......now I know

I thought Islam was a religion of peace. How strange that Christians are being persecuted in an Islamic land.

Go to the website http://truemarmara.org/ Physiocrat, and you'll see an example of a 'peace activist' brandishing a knife that makes your eyes water just by looking at it.

Islam is indeed a religion of 'peace', namely that peace which is consequent on submission to Islam, that is when everyone is either converted to Islam or dead.

See the passages on jihad in the Islamic law manual Ummdat as-Salik (The Reliance of the Traveller).

Angelo, that's not quite what Rowan Williams said.

But yes, this is horrible and scary and we must pray.

Physiocrat: I tend to call it "the religion of pieces"

Do you think the following is going too far or on the money? Has western political 'politeness' allowed the oil to wash away the water so to speak.