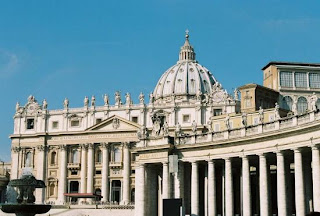 An Italian priest friend of mine had to deliver something to the former Secretary of State, Cardinal Sodano, who although it took months to get him out of the Secretary of State's apartments, is still resident in the Vatican City. He was a little shocked to be directed to the appartments of the former Archbishop Marcinkus who was the president of the Istituto per le Opere di Religione, the Vatican Bank, his former secretary took on that role, as part of Sodano's "retirement package".
Yesterday saw the unprecedented rebuke of Cardinal Schoenborn, I am fascinated by the fact that Cardinal Sodano was waiting in an office somewhere, presumably that of the Vatican Bank, waiting to receive Schoenborn's apology or at least to be "reconciled".
It is no secret that Sodano has opposed Pope Benedict's cleansing of the Vatican stable, his protection of Maciel and of Schoenborn's abusive predecessor, is certainly unwholesome. His use of the Pope's own words about "petty gossip" on Easter day, in his mouth saounded sacandalous. There are stories of renaissance nepotism, involving his architect nephew. As Dean of the College of Cardinals, Sodano is still a "mover and shaker" and part of that faction which protects and wishes to continue the ""Wojtyła legacy".
Schoenborn on the other hand has been increasingly placing himself on the left, his public questioning of  celibacy, his tentative championing of the gay lobby, remember those homo-erotic pictures in his cathedral, the high handed dealing with the bishop Mostar and his visit to Medjugorje have raised his profile above that of many of his European counterparts. Though it is highly unlikely that we will have a second German speaking Pope, it strikes me that Schoenborn is trying to position himself head of left leaning faction.
This is all about the next conclave, the Sodano gang is by its very nature dying off, and to some degree represents the hermeneutic of, recent, continuity. The Schoenberg group is much more worrying since it represents a broader group of modernisers, not exactly heretical, but certainly one which is centred on rupture.
Interesting that the Pope chooses to deal with this on the eve of Sts Peter and Paul.
at June 29, 2010

Celibacy, as a principle, cannot be questioned, without vehement suspicion of heresy.

As a law, however, that is a different thing. It requires the possession of a charism. That cannot be legislated for.

The "law" ought to be repealed.

Yes, yes, yes, we've done that, +Wolsey.
We've done that again and again, that's not what this post is about.

Let us pray then that the next Conclave is many years away, and that the Holy Father creates many good Cardinals before then.

There has always been something of the night about Cardinal Sodano and his protection of Maciel. I am sure he conived to remail within the walls of Vatican City State to avoid any criminal investigations. Also his nephew's link to the aquisition of ecclesisatical real estate in the US is dubious too.

I suppose the meeting and the communique were carefully scripted and took a long time to negotiate between the parties.

I wonder why Cardinal Schoenborn let his mouth run away with him in the first place. The idea that he is positioning himself for the next conclave does not seem probable. His intervention probably lost him votes in the College of Cardinals rather than gained him extra points. After all its the electorate of the College of Cardinals which counts not secular newspapers or public opinion.

Perhaps he feels that he is not going to be elected Pope at the next conclave and just feels that he should increase his popularity in Austria so that he can be freer to say and do what he likes and this Pope and no future Pope can touch him. Is this a more probable scenario ?

Terry,
I suspect we are done with European Popes for awhile, but with the age and ill health of Martini there is no obvious Liberal European Cardinal to act as a focus.
Publicity will not do Sch. much harm, indeed it will unite the German speaking bishop behind him.

Internecine strife among the libs? Well, well, well. That's what happens when pride and ambition override service. More than one of the seven deadly sins involved on both sides, I would imagine. Let them get on with it; they're a busted flush anyway.
I join with Paul Stead in hoping that the Pope will have a good few years to beef up the College of Cardinals and I'm also inclined to agree that the Pope's successor will not be coming from the sick church of Europe.

Father
I have noticed in the past on your blog rather negative comments towards Papa Wotyla. Without Wotyla there would be no Papa Ratzinger. Early in his pontificate BXVI said his time would be spent implementing the initiatives of JPII. JPII introduced Eclisae Dei Benedict continued this with his MP. It is upsetting to speak of a beloved and Holy Pope in ways you appear to be occasioned. The great moral stature and influence of JPII has prepared hearts and souls for the gentle and holy Pontiff Benedict XVI. JPII was the man who retained Josef Ratzinger in a position he would rather not have because as he states in Memory and Identity Ratzinger is a truly great man the othe being Cardinal Sapirha. There is clear continuity in these two pontificates. The high esteem BXVI holds his predecessor in is a sign of JPIIs greatness. Let's not diminish this great hand on the bark of Peter it really is not very Catholic or necessarily true.

One matter that seems to be overlooked in the coverage of the communique issued by the Vatican is the sentence:

"It must be reiterated that, in the Church, when accusations are made against a cardinal, competency falls exclusively to the Pope; other parties may have a consultative function, while always maintaining due respect for persons."

Is this a statement of principle which applies to all Catholics in all circumstances, e.g. bloggers ?

Who was it in early times who without irony said "How these Christians love one another"?
St Paul was aghast at the dissensions at Corinth, and nearer our own time Newman spoke of the "aggressive and insolent faction that caused the hearts of the faithful to mourn". Some things never change.

I don’t think the Holy Father is concerned about ‘stacking’ the College of Cardinals with like-minded individuals, as he knows that it is the Holy Spirit that will decide ultimately. “Man - and the Pope – proposes, but God disposes”

Fidelisjoff,
An interesting observation.
I am not entirely uncritical of Pope John Paul II. He won the battle with Communism but failed to win the battle with Curia. He encouraged a degree of Ultramontanism which gave protection to men like Maciel. Some of his appointmentments were pretty disasterous, some of his liturgical actions were scandalous. He tended to rule the Church as if it was his personal fiefdom, in the style of other 20th cent Popes.
But he is JP the Great, he is the champion of freedom, perhaps the greatest statesman of the 20th century. Many of his Encyclicals are truly great and have advanced the Tradition of the Church.

However I am concerned by those who would claim to be custodians of his legacy, like Card. Sodano, it is something which they have constructed.

I think all this stuff about 'factions' and 'manoeuvrings' and the like are really rather sickening. It must mean in the simplest terms that half the cardinals are orthodox and half are heretics. If that is so then we are in a poor way. In any case, how on earth does anyone with heretical views get anywhere remotely near cardinal rank? You begin to see why non-conformists don't want to have priests. And what connection do all those hierarchical shenanegins have with a gentle and loving Saviour?
Methinks fidelisjoff doth protest too much about criticism of his poster-boy, JPII. Too much Koran-kissing and Assisi-synchretism for my taste. We are forever being told about his having completed the longest papacy for centuries - but he arguably left the Church in a worse state at the end of it than when he started. So, 'Great'? - I don't think so.

Mike,
I don't think factions = heresy, it is often about theological emphasis.

Father - Re your response 'factions doesn't = heresy'. Probably badly expressed by me. The point I was making is: if the CARDINALS are fighting amongst themselves, what message does that send out?
Lucky for the Church that I'M not a priest!

Remember what Our Lady said at the ecclesiastically-approved apparitions at Akita, Japan in 1973 . . ."Cardinal against Cardinal, Bishop against Bishop . . ." Let's just hope that the rest of Her Akita warning and prophecy isn't fulfilled, otherwise we'll all be in serious trouble . . . (P.S. If you don't know about these apparitions, a great book on them, by Francis Mutsuo Fukushima is available from www.amazon.com called "Akita: Mother of God as Co-Redemptrix: Modern Miracles of Holy Eucharist)