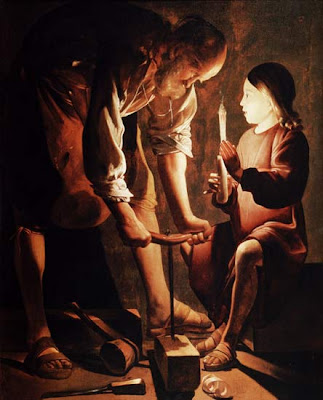 Yesterday was my day off, I rather indulged myself. First of all I put Mass on an hour earlier, I don't normally do that, I expect my people to come to Mass on their days off, it seems illogical, contrary to the spirit of being a servant, for a priest to alter or even cancel Mass just for his convenience.

I went off to a local auction, intending to buy myself a new (old) desk, my current chipboard one, from MFI is falling to pieces, so for £70 I picked up a very nice Edwardian mahogany one, which as it had already lasted for 100 years should see me out. In fact I came back with a small van load of stuff. There were lots of other bargains, a very elegant cane seated chair for £35 which I bought just because it was beautiful, I got a mahogany pembroke table for £30 and a very elegant brass standard lamp for the same price. The best bargain of all was an inlaid bedhead for a tenner, there was a note on it "made by George Fielding Cabinet Maker - wedding gift to daughter - 1938". I was touched that who ever had put it up for auction wanted the story of a father's affection to continue to be told.

In the evening I watched television there was a fascinating programme on BBC 4, called The Good Father. Interestingly it spoke of the "myth" of the bad father, suggesting it was promulgated by the Temperance Movement, it also examines the effects of the World Wars and Depression on fatherhood. It was touching, lots of childhood memories and some interest comment by sociologists, it was well worth watching, an refreshing alternative to the normal feminist view of fatherhood.
at June 22, 2010

Grateful thanks for linking to this programme which I have just watched - it was beautifully put together with the archive film interspersed with the very moving interviews.

I am pleased you had a successful auction! I used to attend many a local auction and still remember the elation I felt when I had a successful bid. I was always slightly apprehensive that I would end up with the ubiquitous stuffed bear instead of the Lot I wanted!

Pelerin,
I would want the suffed bear!

I shall remember that Father! However if I found one I don't think I would be allowed on the bus with it! One auction I attended did actually have a stuffed bear standing ominously in the corner eyeing us all up. I think he turned up in a TV programme later.

I did see a stuffed crocodile at a recent 'brocante' - nearly tripped over it as it was under the dealer's table with just its snout sticking out. That would have been a story to tell!

Wars are not good for fatherhood. Men never come back from a war unscathed, if they come back at all.

And then the damage has to be lived with by the wives and children. War is not a family-friendly activity.

My father went to war as a boy, came back and spent a year in hospital with what I think today would be called PSTD. He went away as a non drinker and came back with a drinking problem - self medication?.