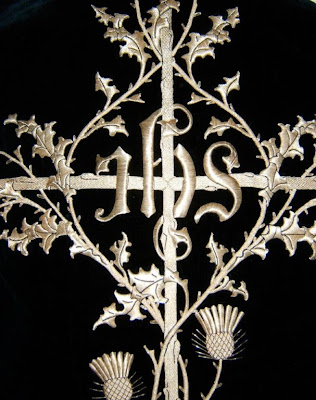 Tomorrow we have the Requiem of another of our parishioners, those who knew him were very fond of him, he inspired kindness because he was kind. He taught history and Downside, was the author of this remarkable collection of books. No-one in the congregation seems to know much of his life before he came to Brighton. At ninety-three he seems to have outlived his contempories. He never spoke about receiving the surrender of Hamburg, as a young Major during the war which we discovered today, all he did speak about was the kindness of his friends, his delight in the young people who visited him, the goodness of those who cared for him. He bore the infirmities of old age with patience and resignation. Occassionally he would come out with a stream of amazing facts and deep insight, one example was a conversation with Sri Lankan member of our congregation, he knew everything about her village, its history, the politics of the region, its economy and even the shops in it; he had just happened to pass through on one of his trips.
He was a convert to the Faith, which caused a degree of estrangement from certain members of his family. The Church was the bulwark of his life, he desired the Eucharist with a passionate hunger and desired to receive it in a state of grace. He came to Mass when others would have given up and remained at home. He was a generous benefactor to our Restoration Appeal. He received Holy Communion fully aware of what it was: the Body and Blood of his Saviour.
Pray for his dear soul as his body rests before the altar in the Church this night.
at June 30, 2010

God rest his soul. What an amazing man. Oh, that the world were full of men like him and I was half the faithful Catholic . . . .

May he rest in Peace

I am sorry to be missing his funeral Mass. I had no idea he was as old as that.

Will light a candle here.

I think we should start reminding the Mohammedans that an insult to Our Lord and Our Lady, is an insult to someone who they regard as a prophet and a woman who they hold in high esteem. A few vociferous protests from them will perhaps make the BBC think twice before taking the biscuit, so to speak.

Eternal rest grant unto him O Lord, and let pepetual light shine upon him.
May he rest in peace.
Amen.