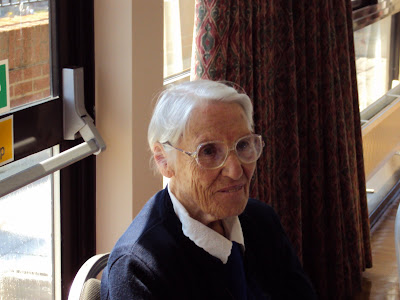 One of the great treasures of this parish are our four sisters of the Servants of the Mother of God.
Srs Mary, Rose, Agnes and Joan are just wise, sensible, good women who have served God and his Church all their life and what is more they are fun.
Today we celebrated Sr Joan's 90th birthday, she's becoming a little frail now but she still has the spark of the zealous teacher and missionary she once was.
She discovered her vocation at the age of twelve at the 1932 Dublin Eucharist Congress. She joined the then Poor Servants of the Mother of God, becoming Mother Gonzaga. She taught in Swindon durng the war then went to Maracaibo in Venezuela. She eventually came to Brighton, ostensibly to retire. Within months of her coming here she had set-up a day centre for the homeless and people being cared for in the community, and became an advocate for the poor.
There were lots of stories going around at the party after Mass, of how she could get bishops and archbishops to do her will. I think she must have been a bit of a holy terror, in the sense that she had that ability to convince you that God and she together could do anything and if you allied yourself with her anything was possible. I got the impression that life as a sister of her's was an adventure.
Say a prayer for her on her birthday.
at June 02, 2010

Thank you for being a true nun.

We were lucky to meet a nice friend in Brighton. She brought with her part of Maracaibo's warmth.

We always remember you. You are in our prayers.

If Sr Joan is like any of the nuns I have met she’s fun, feisty and all about. Never believe nuns don’t know anything about the world. They see all! These are the faithful servants of Our Blessed Lord the Pope should be meeting. Happy birthday, Sr. Joan. May God reward you for your dedicated to service to Him and through Him to us - but not till well after your 100th!