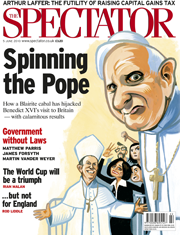 Damian Thompson's Spectator article on the Papal Visit is online.
I tend not to believe in conspiracies but maybe Damian's suggestion should at least be examined, he is suggesting that the visit is being hi-jacked by a coalition of what Damian terms the "Magic Circle" and Tony Blair's Faith Foundation, I am not sure about that, in fact I am not sure why The Tablet wasn't thrown into the mix, now Chris Patten -Tablet board member- has been made Visit-Tsar.
What there does seem to be are an awful lot of people who seem to live in a world that hopes the Pope will be dead soon, and somehow the Church will return to the confusion of the Paul VI era, maybe that is one of the reasons that lays behind not booking either Coventry Airport or Hydepark, I am sure it lies behind the "Can't we just wait" petition to delay the new English Missal translations.
Rad-trad Frenchmen might see it all as a Masonic conspiracy. That is emotive, but, if that is shorthand for a hodge-podge of people; the secular world, protestant Christians of one sort or another, Catholic laity, priests bishops and cardinals who are pushing Enlightenment views of religious and moral Relativism, it is most probably a pretty fair assumption. The difficulty I have is in believing that there is much more than simple opposition to the Pope that unites them.

The alternative to the Benedictine Project is turning the Church into a sterile desert containing nothing but aging bishops and a vast lay staff, with a few lay people, with a few vague post-Christian beliefs.
at June 05, 2010

Why people would want a sterile desert is beyond me, why not the richness and beauty of the Catholic faith

The trouble with conspiracy it's always about the hermetically sealed machinations of the 'hidden' and the 'elite'. Happily God can see through walls and human appearances and he doesn't need high tech surveillance gadgets. To be sure the Enlightenment (one of the most appalling series of 'revolutions' in Western history that by comparison makes so many of the horrors of the inquisition look like the death of Bambi's mother) sought (and seeks) to eradicate any trace of authorities the roots of which are authentically theological. If there's no awareness of objective authenticity we are all free to self-authenticate till the virtual cows do their thing. What's always certain is that the throne left vacant by this guillotining of prior authority is usurped by the desire to rule as opposed to the imperative to serve.
The 'power' and 'principalities' of which St. Paul wrote must exist. Masonry - like most esoteric (that word again) self-authenticating orders ape the biblical authority and Catholic sacramentalism (to a certain 'degree') - giving up God doesn't mean you eradicate the need. Maybe the Masons still have gotten over being banned from the Eucharist? They were given an ultimatum - Hiram (or at least what they made of him and their ability to become little Hirams) or Jesus Christ.

My personnel opinion is the that the blood crazed ferret (the anglican church times nickname for dear Damien) is more right than wrong, although I am going to charitably assume that their excellencies are just not the best organisers in the world, rather than being actively enaged in a plan to kidnap the Holy Father

The infiltration of the clergy by various secret societies (of which masonry is the largest) is no conspiracy theory and has been documented by reputed Vatican journalists like Tornielli. It is now beyond doubt that the chief reformer of the liturgy at the council was a reputed mason and Paul VI unceremoniously dismissed him for being so. Paul VI himself did not help the matter when in 1966 he naively approved an indult saying that former Anglicans, could retain their masonic membership, when converting. Archbishop Fulton J. Sheen received a former Communist in 1952 called Bella Dodd, into the Catholic church. She would later go onto testify that her party was responsible for placing thousands of communists in American seminaries in the 1930s.

It should be no surprise that many of bishops, anti-Benedict in nature, are working for the destruction of his plans to restore the church to her former glory. They are pinning for the times of the spiritual aridity of the pontificate of Paul VI because it is their dream that the church becomes more Protestant.

God have mercy on them all.

I think that Just Another Mad Catholic is overdoing the charity.

For 40 years there has been a crisis in the Church, albeit an ebjoyable one "for those who like that sort of thing", and Benedict is the Pope to end the fun and games and steer the Bark of Peter back off the shoals of relativism.

No wonder our limp Hierarchy are giving him such a luke-warm welcome.

The problem with the blood-crazed ferret's writings are that they are filled with innuendos, guilt by association, rumours and secret sources. The Spectator article, and especially his blogpost, take this "journalistic" technique to a new low. Perhaps Thompson wants the visit to be a failure...

The Holy Father's visit may well be in trouble, and if so that would be a great tragedy; many of us have been praying for its success. But yet another attack on the "magic circle" (and in his latest blogpost, a guilt by association slur on Lord Patten because of his Tablet connection) is decidedly unhelpful in getting things put right.

Incidentally, the very latest edition of The Tablet contains a spirited defence of the new Mass translation. I wonder whether that will earn some mention by Fr Finigan, Fr Zuhlsdorf, Damian Thompson ...

Another l.ayer of the conspiracy theory, apparently the 'Youth Vigil' is in the hands of CAFOD

It is no conspiracy to say that the friends of Tony Blair and Cormac Murphy O'Connor do not like the Pope, that was obvious to anyone who saw Cormac's response when he found out who the new Pope was.

Nor is it a conspiracy theory that seminaries have been filled with people who didn't and don't even hold the catholic faith for several decades.

If greater subsidiarity had been followed in the Church as Christ had intended the damage would have been a lot less severe I feel.

Bishops should be independent of other Bishops so that they are protected from domination and also forced to govern their own diocese rather than surrendering parts of it to men who are strangers in their diocese.

And each diocese must have its own seminary otherwise you end up with all of the future priests been trained by a few people who have the power to shape the future of the Church, and if these few people who train the seminarians are heretics you get widespread desolation once their students are unleashed.

It also makes it much easier for the enemies of the Chruch to gain a position of dominance within a short space of time with which they can seek to burn God's vineyard to ashes.

And if smaller local seminaries meant that priests were not so highly educated then I say it would be better to have less educated priests who were holy and devout than a group of highly educated heretics who lead souls to hell.

The barque of St. Peter is not wrecked, nor is it, as one bishop claimed, yet foundering. I think we see from the top down, in GB at least, the lack of education/catechesis of priests. The last thing we need is any more badly or uneducated men coming out of the seminary. Those who are now bishops and archbishops are the first products of liberalism/relativism which took hold even before V2 and so it goes to the next generation of priests and onwards and downwards.
You have to be well-educated to be able offer cogent counter-arguments to the spirit of the age, as per this and other Catholic blogs, (DG,) rather than to say it’s wrong or not true, um . . . There is nothing more frightening than trying to argue from a base of unknowledge.
The thing is that too many clerics, good men, just don’t know how to stand against popular opinion because they have not been given the theological equipment to do so, nor have they been for the last four decades from classroom to ordination.
How can they even resist some of their more enthusiastic laity in their takeover bids of priestly function unless they can offer a solid reason why not? They are expected to work in isolation, often with little support from their bishops who themselves don‘t know how to give that support. I am surprised so many priests stick it.
I don’t see a conspiracy against the Pope. I see fear of being asked to stand up and be counted, to be seen as other and take the flak. That is why the exhortations of Pope Benedict are so terrifying and why, perhaps, our hierarchy appears to be so ambivalent about his visit with the prospect of thousands being so visible, vocal and unashamedly Catholic. They’re frit. But I have every confidence that Chris Patten will turn things around and we shall be able to demonstrate our loving respect for a Pope who gets it.

I'm not into the conspiracy theory either. I think there is such a prevailing mindset of joylessness that the idea that faithful Catholics might ENJOY welcoming our Holy Father, and praying and celebrating the sacraments with him simply doesn't occur to them. It is an easy step from moving the Holy Days of Obligation to a 'more convenient' day to seeing a Papal visit as something to be got through in the shortest possible time with the minimum of hassle. And the last thing wanted/needed is for too many people to be inspired by a Pope who continually bangs on about joy in the faith and enthusiasm for his priesthood.

Some millionaire Catholic will step in and rescue the mess. As usual.

On the other hand....the official website seems quite good on brief inspection: thepapalvisit.org.uk. Some theological deficiencies in the section on faith perhaps but also some practical ideas for doing something to make the Pope's visit an occasion of evangelisation.

By accident, I went to the web site for the famous (infamous) Bayside apparitions. This allegedly took place at Long Island, New York in the USA back in the 1970's. It was condemned by the Vatican and local Bishops as a hoax many times.

Some of the so-called prophecies sound almost like today's newspaper. Cardinals fighting against Cardinals. Bishops fighting with Bishops. Priests, Bishops and Cardinals engaging in satanic pedophile rites in the Vatican.

I can see why the Vatican back in the 70's, condemned the whole thing with great speed.

Don't Rad-trad Frenchmen look back with nostalgia to the era of Petain, Laval, and the Vichy regime?

cor ad cor;
you can be quite certain that Damian Thompson doesn't want the Holy Father's visit to be a failure, whoever else might do . . . he's a faithful Catholic.