The Lord is My Portion 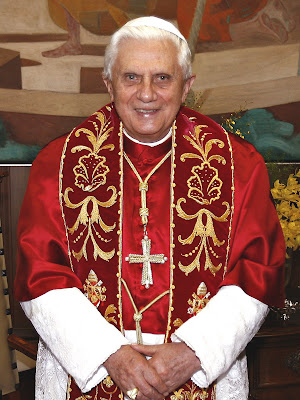 I had never made the connection between celibacy and the "landlessness" of the Jewish priesthood, last Thursday Pope Benedict made this observation in his question and answer session with priests:


"Paul calls Timothy – and in him, the Bishop and in general the priest – 'man of God' (I Tm 6: 11). This is the central task of the priest: to bring God to men and women. Of course, he can only do this if he himself comes from God, if he lives with and by God. This is marvellously expressed in a verse of a priestly Psalm that we – the older generation – spoke during our admittance to the clerical state: 'The Lord is my chosen portion and my cup, you hold my lot' (Ps 16 [15], 5). The priest praying in this Psalm interprets his life on the basis of the distribution of territory as established in Deuteronomy (cf. 10: 9). After taking possession of the Land, every tribe obtained by the drawing of lots his portion of the Holy Land and with this took part in the gift promised to the forefather Abraham. The tribe of Levi alone received no land: its land was God himself. This affirmation certainly had an entirely practical significance. Priests did not live like the other tribes by cultivating the earth, but on offerings. However, the affirmation goes deeper. The true foundation of the priest's life, the ground of his existence, the ground of his life, is God himself. The Church in this Old Testament interpretation of the priestly life – an interpretation that also emerges repeatedly in Psalm 119 [118] – has rightly seen in the following of the Apostles, in communion with Jesus himself, as the explanation of what the priestly mission means. The priest can and must also say today, with the Levite: 'Dominus pars hereditatis meae et calicis mei'. God himself is my portion of land, the external and internal foundation of my existence. This theocentricity of the priestly existence is truly necessary in our entirely function –oriented world in which everything is based on calculable and ascertainable performance. The priest must truly know God from within and thus bring him to men and women: this is the prime service that contemporary humanity needs. If this centrality of God in a priest's life is lost, little by little the zeal in his actions is lost. In an excess of external things the centre that gives meaning to all things and leads them back to unity is missing. There, the foundation of life, the "earth" upon which all this can stand and prosper, is missing.

It is this type of insight that makes me admire his teaching so much. Unlike so many contemporary theologians he has the ability to build up faith and lead us deeper into the mystery and worship of God.
at June 16, 2010

'To bring God to men and women.' Is this not an arrogant presumption? as if priests have God in a way that others do not. Surely everyone is called by God to centre themselves and their lives on God and Christ, laypeople as much as priests. Excessive preoccupation with ordained priesthood and its distinctive emblems such as celibacy can easily detract from this more important truth - that everyone needs to see themselves as centred on God.