Ad Orientem reports the Bishop of Cordaba says that his cathedral will not be shared with Moslems.

The Bishop of Cordoba, Demetrio Fernandez, said today that "sharing" the Cathedral of Cordoba and former mosque that some Muslim groups want, "is a euphemism which means: get Catholics out of here". Faced with this and in an interview with Europa Press, Fernandez wanted to make clear that, "therefore, the answer to the question about sharing the Cathedral is that no, we're not, because this place has been a Catholic Church 16 centuries, while Muslims have been four and half centuries". 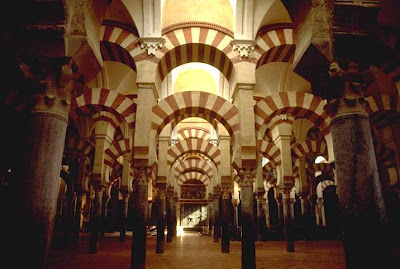 Consequently, the Catholic Church, which is the holder of the temple through the Cathedral Chapter of Córdoba, has "a good relationship with Muslims" and want to collaborate with those who profess Islam in constant search of "peace, justice and coexistence between peoples, but that is one thing and another, very different, you want to share the same temple for worship, which is not possible, either by Muslims or by Catholics".

Part of the liberal agenda, latched onto by Spain's Zappertero Government, seems to be to emphasise a Spanish golden Islamic age where Moslem's, Jews and Christians lived a harmonious peaceful existence revelling in the study of classical Greek philosophy and mathematics. This did happen but not just under Islamic leadership, it is very easy to forget that this age of peace and harmony also happened under Christian, perhaps even more so if one looks at primary sources.
Fr Sean put up an extract from Ibn Jubayr twelth century journal of his Hajj journey to Mecca.


... again and again he laments on his journey how his fellow Muslims treated him with contempt, and how several times he nearly was killed, and often was robbed. By comparison, he comments on the happy condition of those Muslims who lived in the lands of the Franks. This does not soften, however, his delight at the fate of any Christians who fell into Muslim hands, nor his prayers for the destruction of Christendom and the enslavement of its people to the glory of Islam.

The correct Spanish name is Jose Luis Rodriguez Zapatero - not Zappertero as you say in your piece!

I wonder what the Muslim reaction would be if a proposal were made to celebrate Mass in Hagia Sophia in Istanbul. After all, it was originally a Christian church.

But Hagia Sophia is now a museum, no longer a mosque. There's a story that JPII went in and sang a Te Deum, much to the embarrassment of his hosts! The Orthodox had been trying to do something similar for years, apparently.

Didn't know that, Delia. I saw a travel programme recently and it appeared to me that it was still a mosque eg there were shoes deposited at the doorway.

I wonder what the Muslim reaction would be if a proposal were made to celebrate Mass in Hagia Sophia in Istanbul. After all, it was originally a Christian church.

The fact of the matter is that we don't have any prelate (or pope for that matter) with enough back bone to propose the above to show the utter absurdity of the Mohammedans. The church now is too busy confirming them in their error by saying that Muslims and Christians worship the same God.

Actually, the so-called 'Golden Age' was during the best part of the 11th century.

Then the Almoravids (Murabitun, or frontier dwellers)) conquered Muslim Spain. They were puritanical, harsh rulers and were Berbers, not Arabs.

After them came the Almohads (Muwahidun, or unitarians). They were harsher still and withdrew dhimmi status from the Jews and the Christians. They had to choose between converting to Islam, fleeing or being executed.

Many Christians and Jews fled to Christian lands, so did many Muslims.

The Almohads were not unlike Saudi Arabia next door to Poland.

No wonder the Christians crusaded.

Here's an extract from a brilliant article by William Kilpatrick - 'Jesus of Nazareth vs. Jesus of Neverland' from www.frontpagemag.com

"Jesus is considered a great prophet by Muslims, but one has to wonder why, seeing as he has almost nothing to do or say in the pages of the Koran. He only speaks on six or seven occasions and then, very briefly, and primarily to deny that he ever claimed to be God. But then, the whole point of introducing Jesus into the Koran is to discredit the Christian claim that he is divine—a claim that, if true, invalidates Muhammad’s entire mission. Thus, whenever Jesus is mentioned in the Koran, it’s almost always for the purpose of whittling him down in size. For example, “He was but a mortal whom we favoured and made an example to the Israelites.” (43: 60).

"The Jesus of the Koran appears mainly in the role of a counter to the Jesus of the Gospels, but “appears” is really too strong a word. This Jesus doesn’t attend weddings, or go fishing with his disciples, or gather children around him. He has practically no human interactions, and what he has to say is formulaic and repetitive. He is more like a disembodied voice than a person. And, to put it bluntly, he lacks personality. The Jesus of the New Testament is a recognizable human being; the Jesus of the Koran is more like a phantom. When did he carry out his ministry? There’s not a hint. Where did he live? Again, there’s no indication. Where was he born? Under a palm tree. That’s about as specific as it gets in the Koran. Next to the unanswered questions about the Jesus of the Koran, President Obama’s problems over establishing his birthplace seem minor by comparison. In short, Muhammad’s Jesus is a nebulous figure. He seems to exist neither in time nor space. On the one hand you have Jesus of Nazareth, and on the other, someone who can best be described as Jesus of Neverland.

"One thing you find in the Gospels which you don’t find in the Koran is a solid geographical and historical context. If the story of Christ was set in some mythical location, long before the age of recorded history, it would be easier to pass it off as…well, a myth. But the story takes place not in some vague neverland but in places that can still be visited today—Bethlehem, Nazareth, Jerusalem. Christ doesn’t just go to some indeterminate wedding feast, he goes to the wedding feast at Cana; in his parable about the good Samaritan, he mentions a specific road, the one going from Jerusalem to Jericho. He converses with the Samaritan woman at Jacob’s well in the town of Sychar. He cures one man at the pool of Siloam, and another at the pool with five porticos. Sidon Tyre, Capernaum, the Sea of Galilee, the Jordan River, the Mount of Olives, the Praetorium, Herod’s court, Golgotha—there is a specificity and facticity that you won’t find in mythology.

"The Jesus of the Koran really does exist in a neverland. Set against the Gospel story with all its vivid detail and close attention to persons and events, the Koranic account is vague and vapid in the extreme. And amazingly brief. If you omit the repetitions, the whole of what the Koran has to say about Jesus can be fit on about two or three pages of Bible text. And of that, about half is devoted to denying that he was God’s son."

I wonder how Moslems would react to a Jewish request for Temple Services in the Al-Aqsa Mosque in Jerusalem? When Ariel Sharon set foot on the Temple Mount he sparked off an intifada.

As for the "Golden Age" as understood by the Spanish Socialist Party is a nice bit of historical fiction and has no relation to present day Spain. To this day the victories over the Moslems are commemorated with Christians fighting Moors and there is even a town called "Killthe Jews". In spite of protests by the Vatican Spanish Morality Plays during Eastertide are heavily anti-semitic, not because of the Church which opposes such sentiments but because of the municipalities maintaining their traditions. However the Spanish government seems quite well disposed to Hamas.

The Spanish Government is well-disposed to Hamas because, I suspect, the Madrid train bombings scared the electorate into voting for the Socialists, and because the Socialists are - as secularists - a herd of arch-dhimmis when it comes to Islam.

While their mosque is being restored, Muslims are being the use of St Lambert in Jumme. Every Friday, the Cross is removed, prayer mats laid and images hidden...Henri Remy, the 89 year old parish priest rejoices in the dialogue in the spirit of the Council, "We pray to the same God, each in their own way", he says with emphasis...Muslims believe once a building has been used for their prayers that they retain the right of use for ever.