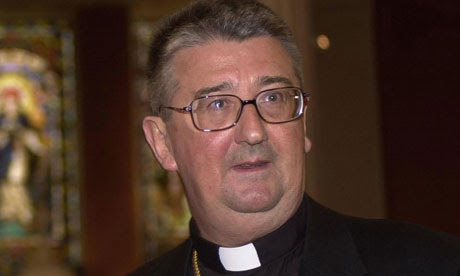 Ever since reading Orwell's 1984 I have been concerned by how governments, and others, manipulate language. The control of language is about the control of the thought which gives substance to our being. This why those who control the media, and the arts too, are so powerful.

Archbishop Diarmuid Martin of Dublin made the following intervention at the Synod on Evangelisation a few days ago.

...
The challenge of language is especially felt in those countries where English dominates and which are often greatly influenced by linguistic philosophies with known epistemological challenges. There is however a further challenge of the day-to-day language, not just of the media, but of a culture of the manipulation of language and the management of information where the meaning of words is changed and manipulated for commercial, ideological or political motives.
A strongly individualist vocabulary is often developed and then applied in areas such area of human sexuality, where the concepts of relationship and mutuality of the sexes become obscured. Such language can become enshrined in an individualistic understanding of human rights language, with a consequent distortion of juridical and political language. The notion of right becomes separated from its ontological roots. Individual rights are treated as absolutes or attributed a dominant place over and against other rights and responsibilities.
Let me give one current example from public debate in Ireland. In discussions advocating the legalization of marriage between homosexual persons, the terms of the debate are shifting from ‘same-sex marriage’ to ‘marriage equality’. The debate is thus moved away from any debate on the nature of human sexuality into one apparently of equal rights.
Such a manipulation of language and meaning is cleverly developed to shape the debate in society about public morality in a particular direction. The concept of dialogue as robust confrontation of ideas in the search for the truth is replaced by vague interpretations of consensus and tolerance.

This can equally happen in the Church, where priests reluctant to even mention the word abortion say bidding prayers (if at all) for "courage to keep going for those doing the vigil outside the ***** ***** hospital" (a tiny handful, btw) instead of saying 'courage to those of us who have not yet joined in the 40 Days for Life vigil praying for an end to abortion'

Anyone at Mass who didn't see the literature which was whipped away before anyone could see it wouldn't know what the hospital vigil was about, unless they went out of their way to find out. Unfortunately, far too many are comatose!

In politics '101' they teach you the fundaments of political persuasion - it called "problem=reaction=solution". If political party 'give me your money and your life' wants to achieve something they simple reverse engineer from 'solution', by selling the problem which their consultants assure them is bound to elicit reaction. So 'solution', destroy the integrity of marriage/traditional Judeo-Christian family values. 'Problem' - the golden tool - "equality" - reaction - unless we have the benefit of the moral compass of those who vouchsafe the above tradition we are likely to hold the 'values' of what Bruce Bawer describes in the 'Victim's Revolution', of course there'll be outrage at this lack of 'equality'.

As for obfuscation-authorship these hit the mark:

No better master than the Archbishop, a consumate practitioner of the highest degree.

To 'definitively archive the past', to 'shape the church', to shape=to adjust to a certain condition - I wonder what shape it would take? Hopefully it would still have 'shape' of our Redeemer and tradition he vouchsafed and which countless of our ancestors died under the grace of. It really does give one a bit of, if not cognitive dissonance (we all understand lies if not why they happen), a sort of soul dissonance in our 'post'- Christian 'economy'. I wander what our forebears who lived and died under the grace of Christ's Church would think of what we have, or at least want, to definitively archive?

I am told that Fr. Scheelebex, in relation to Vatican II, stated "..we know where the ambiguities are and we know how we will interpret them..".

Another aspect of the manipulation of language?

I think its time to call a spade a spade. This whole problem of linguistics is otherwise known as bs and what's happening is that liberals are trying to bs their way to winning the argument. I think its time to stop giving people the benefit of the doubt and just realise that for activists like Peter Tatchell, Caroline Lucas etc the ends justifies the means. If that means telling lies, talking bs and using rhetoric then so be it. They have little regard for the truth.