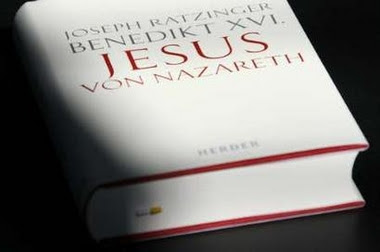 Father Zuhlsdorf on Jesus of Nazareth the Popes New Book, it will be published on Monday in Italian and German, the English speaking world will have to wait until 15th May.

One of the engines driving Pope Ratzinger’s book was his reading a work 15 years ago by a rabbi, Jakob Neusner, A Rabbi Talks With Jesus. Benedict returns often to his insights.
For example, His Holiness recounts his reading of Neusner’s book, wherein Neusner spends a day with Jesus, following him in an interior dialogue and then returns to his study of Torah with other rabbis. One rabbi says to the interior Neusner, “613 precepts were given by Moses, 365 negatives ones corresponding to the number of days of the year and 248 positives corresponding to the number of parts of the body. David comes along and reduces them to 11… Isaiah reduces them down to 2. Habakkuk distills them to one only, as it is written: ‘The righteous one will live by his faith (Hab 2,4)’. ‘And so’, a rabbi asks the interior Neusner, ‘is this what Jesus has to say?’, Neusner responds, ‘ Not quite, but almost.’ The other rabbi: ‘What did he leave out?’ Neusner: ‘Nothing.’ The other rabbi: ‘Then what did he add?’ Neusner: ‘Himself.’ The point being that Neusner will not follow Jesus because of the radical “I” of Jesus’ message. Neusner cites Matthew 19:21: “If you want to perfect… follow me.” For Ratzinger, this helps create a conceptual bridge: “The perfection required by the Torah, being holy as God is holy (cf. Lev 19,2; 11,44), now consists in following Jesus.”

This little episode from Pope Benedict’s book is an object lesson in his theological method. He is always concerned to keep faith and reason in the right perspective, but always in play in their proper roles. Moreover, Ratzinger
has always used interesting non-Christian or non-Catholic, or even errant doctrines as springboards for theological work. No one who has read enough Ratzinger is surprise that he does this, even though his nimbleness leaves one a bit breathless. For example, I think it can be argued that Joseph Ratzinger probably knows more about Liberation Theology than anyone. It might surprise some that he uses points of Liberation Theology in one of his own works on liturgy. Consider using the image of Christ is “Liberator” when working theologically with liturgical issues. This is what he did in A New Song for the Lord: Faith in Christ and Liturgy Today.

The Pope sets out like so many, to search for the Historical Jesus. Someone is always doing this, of course. Jesus is usually morphed into someone else every thirty years or so, and always at the expense of Jesus Himself. These these searches wind up emphasizing one dimension of Christ into order to underscore another. Understanding that there will always be more to say about Jesus, the Pope offers this work, fully expecting that it will be met with resistance and criticism from some circles.