Pope: God’s Word, and thereby the Church, knows no age 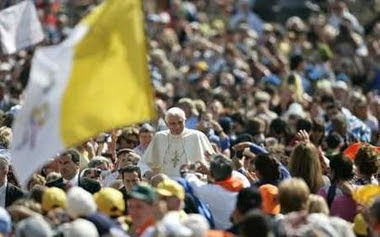 Vatican City (AsiaNews) – The “orated reading” of the Bible, the catechesis and coherence in “moral” behaviour which mark the life and works of the third century Origen, “one of the greatest fathers of the Church”, have lost none of their relevance in today’s world. They show that “in the allegorical and spiritual reading of the word of God and in the coherent commitment to life, the Church blossoms and renews itself”, because God’s Word “knows no age”. In his continued catechesis on the importance of the teachings of the fathers of the Church, today Benedict XVI spoke of Origen to the 25 thousand pilgrims gathered in St Peter’s square for his general audience, defining the Saint as an “essential figure in the development of Christian thought”, in which he brought about an “irreversible turn”. So much so, that pope Ratzinger said he had relied heavily upon him for his “Jesus of Nazareth” and prayed that he remain a model for theologians today. A pupil of Clement of Alexandria – of whom the pope spoke last week – Origen projects all that he had learned from him towards the future. He was not only “a brilliant theologian, but also an essential witness of Church doctrine”, he said that “conduct must correspond to the word of law” and he “led many others to follow him”, yearning to die the martyrs death that his father met. Benedict XVI notes that while he preached at Caesarea, he said “the best way to honour my father and glorify Christ was by living a good and upright life”. His “nostalgia for the baptism of blood” was in part fulfilled when in 350; he was arrested and tortured, dying soon after.
read full article
at April 26, 2007