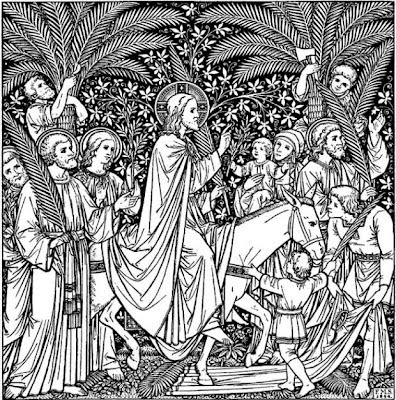 The King enters His own city.
The people shouted “Hosanna! Hosanna! Blessed is He who comes in the name of the Lord”.
Fr Cantalamessa on Zenit has an interesting exploration on who killed Jesus.
He looks at the change in attitude since the Shoaha, the movement from blaming the Jews to blaming Pilate. One of the great problems with this is that it takes away from the idea that God places himself into the hands of those He loves and it is those who He loves who crucifiy Him. Those who cry "Hosanna" are those who cry "Crucify". Blaming Pilate exclusively diminishes what scripture has to say about Divine Love. God loves and chooses those who kill Him, His Passion is about the absolute vulnerability, which is at the heart of His Divinity, the Cross at the heart of the Trinity.
The same lips that proclaim "Hosanna" today also cry, "Crucify Him".
Who crucifies Him today? Those who cry, "Hosanna".
at April 01, 2007

To say exactly who killed Jesus is indeed problematic in view of recent history. To say "the Jews" can lead to misunderstandings, since apart from Pilate, everyone involved was a Jew - Jesus, his disciples, the religious authorities, etc. All Jews. So one must be clear precisely which Jews plotted his death.

From a reading of all four accounts of the Passion, the issue is far from clear-cut. The Jewish authorities were concerned about Jesus becoming an alternative centre of power, but the High Priest tears his garment on account of supposed blasphemy, and Stephen was stoned, not crucified, for blasphemy. It seems to me that Pilate was a weak appointee who was ultimately scared of the Jewish mob who had been stirred up by the Temple authorities and took what he thought was an easy way out, in a botched legal procedure. Crucifixion was a Roman punishment, and it was Pilate who handed him over. Not the first, nor the last of such things.

And this surely is the point. Crucifixion is still going on all the time and the real question is what does this mean for us in our own messy, compromised lives?