Pope says only Jesus' body, blood can purify, save humanity 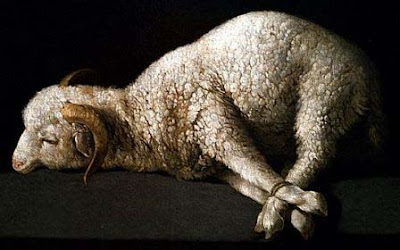 Carol GlatzCatholic News ServiceROME (CNS) --
The body and blood of Christ, as well as his love, are the only things that can purify and save humanity, Pope Benedict XVI said.During his April 5 celebration of the Mass of the Lord's Supper, which commemorated Jesus' institution of the Eucharist, the pope reflected on how Christ transformed the Jewish Passover meal into the new Pasch of the Eucharist.
Pope Benedict also washed the feet of 12 young laymen from the Diocese of Rome. The ritual reflected the call to imitate Christ by serving one another. The pope poured water from a gold pitcher onto the foot of each young man and then gently rubbed each foot dry with a white towel.
In his homily at Rome's Basilica of St. John Lateran, the pope said Christ is the true living temple where God resides and where "we meet God and adore him.""His blood, the love of the one who is both Son of God and true man -- one of us, that blood can save," he said.
Pope Benedict explained at length the nature and origin of the Passover celebration as God commanded Moses in the Book of Exodus, and the way Jesus and his disciples would have celebrated this meal on the eve of his crucifixion.
The Bible says the memorial feast of lamb and unleavened bread was to be continued from generation to generation "as a perpetual institution," the pope said.
But "how can the blood of an animal purify humanity, save mankind, have power over death?" the pope asked, quoting the writings of St. John Chrysostom.
The annual sacrifice of a lamb was a symbolic and "nostalgic gesture," the pope said, and it signified the expectation and hope that someone would someday come to save mankind.
Jesus would become the true lamb of God who, as St. John the Baptist proclaimed, "takes away the sin of the world," said the pope.Today, the new Pasch, Easter, represents the effective sacrifice -- Jesus' giving of himself for humanity, Pope Benedict said.
"Let us pray for help (that we) not keep our life for ourselves, but we give it" to Jesus and help other people discover true life found only in him, said the pope.
Donations collected during the Mass were earmarked for a medical dispensary in Somalia run by Caritas Somalia, the local affiliate of Caritas Internationalis, an international network of Catholic relief, development and social service agencies. Somalia, located in the horn of Africa, has been ravaged by anarchy and decades of war.
at April 05, 2007