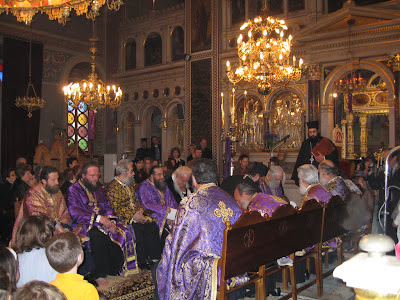 There are always little dramas in a parish, little events, and odd irritating things happen. I was thinking of writing this in the form of a Who Dun nit but maybe not…

Over the weekend I put a list out for “Feet”, I asked for “Male Feet, 12 Needed, Please sign up below”. On Monday I went to collect it and … yes it had gone! I thought it had blown away or had been put under something. But the consensus was that it had been nicked! “Who by?” I asked. Well fingers generally pointed to a 70 year old male feminist! Someone had been muttering that women should be involved.

For the last few years I haven’t been able to wash feet, I suffered a rather annoying paralysis a few years back and have only been able to manage a vague genuflectionial bob, a bit like a parlour maid’s curtsey.
Since the beginning of Lent, having asked our Holy Patroness, the Great Magdalen for a special Lenten grace, I have been genuflecting like a thirty year old. So this year Foot Washing is back. There was a time when I would wash the feet of anyone, men and women, but since the publication of the various Roman documents saying the people have a right to the Liturgy of the Church and that no priest or bishop has the authority to change the Liturgy, I have been following what the instruction tells me to do.

We have male and female Extra-Ordinary Ministers of Holy Communion, male and female Altar Servers, most of our Lectors, Catechists and Sick Visitors are female, as the majority of the staff in our school. Over the last few years whenever the Holy See is asked about the gender of feet to be washed it says very clearly that they should be male. I must say I like the idea that men, should be singled out for this one single act, alone because of their gender.
The reason is that they are not simply a gang of people from the parish, or an excuse for the priest to show divine humility, they represent the Apostles, The Twelve, who themselves represent the twelve Patriarchs of Israel, their very maleness is important. I understand that in some Orthodox books liturgical books, it is preferred that a Patriarch wash the feet of twelve Bishops, (remembering of course that the Apostles were Bishops or at least would be after the Last Supper), and that a Bishop wash the feet of twelve priests. In other Eastern Rite traditions the feet should belong to the heads or patriarchs of families.
I know that lots of odd things happen, in one parish people were asked to bring a plastic bowl and to wash the feet of their neighbour, in others various people are appointed to wash the feet of a small group. Interesting but this is not the Liturgy of the Catholic Church.
There was a time, in England before the Reformation, when on Maundy Thursday anyone with authority be it the King or Queen, local Magnate, heads of families religious superiors, would wash the feet of their subordinates, an excellent custom which should be restored.
Posted by Fr Ray Blake

Thank you for trying to follow the rubrics, Father.

Thank you, Father, for witnessing to the wishes of the Church. Happy Easter.

I think that 'who will have their feet washed' is over shadowing the institution of the Eucharist and the priesthood. Since the ritual is optional I think it is better omitted the better to focus on more important happenings of Holy Thursday.